The last blog entry looked at ways a foreigner can find the pulse of a city and help focus local listening, re-evaluation, and discussion. After creating works that grew out of single keynote sounds, new questions arose for me. How could one create a sound map of an entire province? How literal and comprehensive would that map need to be? How could recordings of diverse acoustical spaces exist in a gallery? A commission from Documenta 14 to create Matanzas Sound Map provided the opportunity to explore these questions.

One approach I experimented with in making an audio piece that surveyed an entire province was to play with the scale of perceived acoustical space. Recordings of open landscape were used to create the illusion that an indoor sound installation expanded far beyond the gallery walls. We hear the close-up drone of insect chatter, scattered aviary calls marking territory in the wetlands at dawn, and a distant railroad bell. Listening to this rural audio space creates an illusion of being transported from the urban setting of the gallery and into a vast natural habitat. Changing the scale of the acoustical space can be disorienting and heighten visitors’ attention to what they hear. 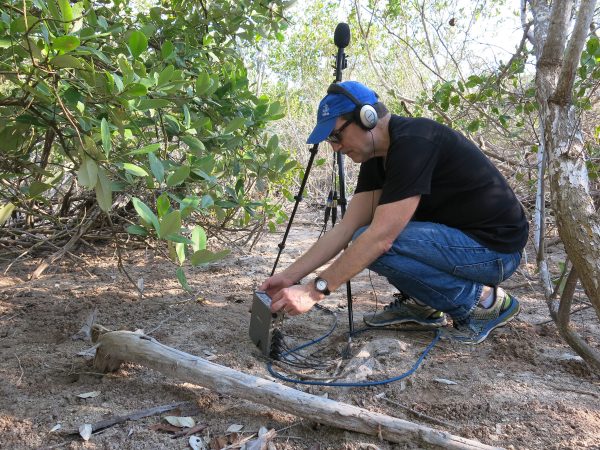 Leonard recording recording with Ambisonic microphone in the Playa Girón (Bay of Pigs), the site where a Cuban American paramilitary group invaded the island in 1961.

Later in the Documenta installation, after establishing this sense of vast space, listeners are transported to an urban soundscape where a former stevedore sings songs of the Abakua secret society, domino players erupt in outbursts as they argue the rules of the game, and a bartender tells of his mesmerizing dream of recreating a vintage 1945 tavern centered around a 78-rpm jukebox. There are no audible vanishing points in these spaces; the scale matches that of the gallery. Before we know it, our sense of place is redefined by the smaller space where the people who we hear seem to be within reach.

A helpful strategy in weaving disparate sounds into one cohesive map was to play with connections made during audio transitions. In one instance, the chatter of the forest fades to musicians singing a song that traveled from the Cross River between Nigeria and Cameroon, through the transatlantic passage, to the ports of Havana and Matanzas. The stevedore’s connection to water is a trope in the group’s songs, and this trope informed my transitions between field recordings, chants, and songs. 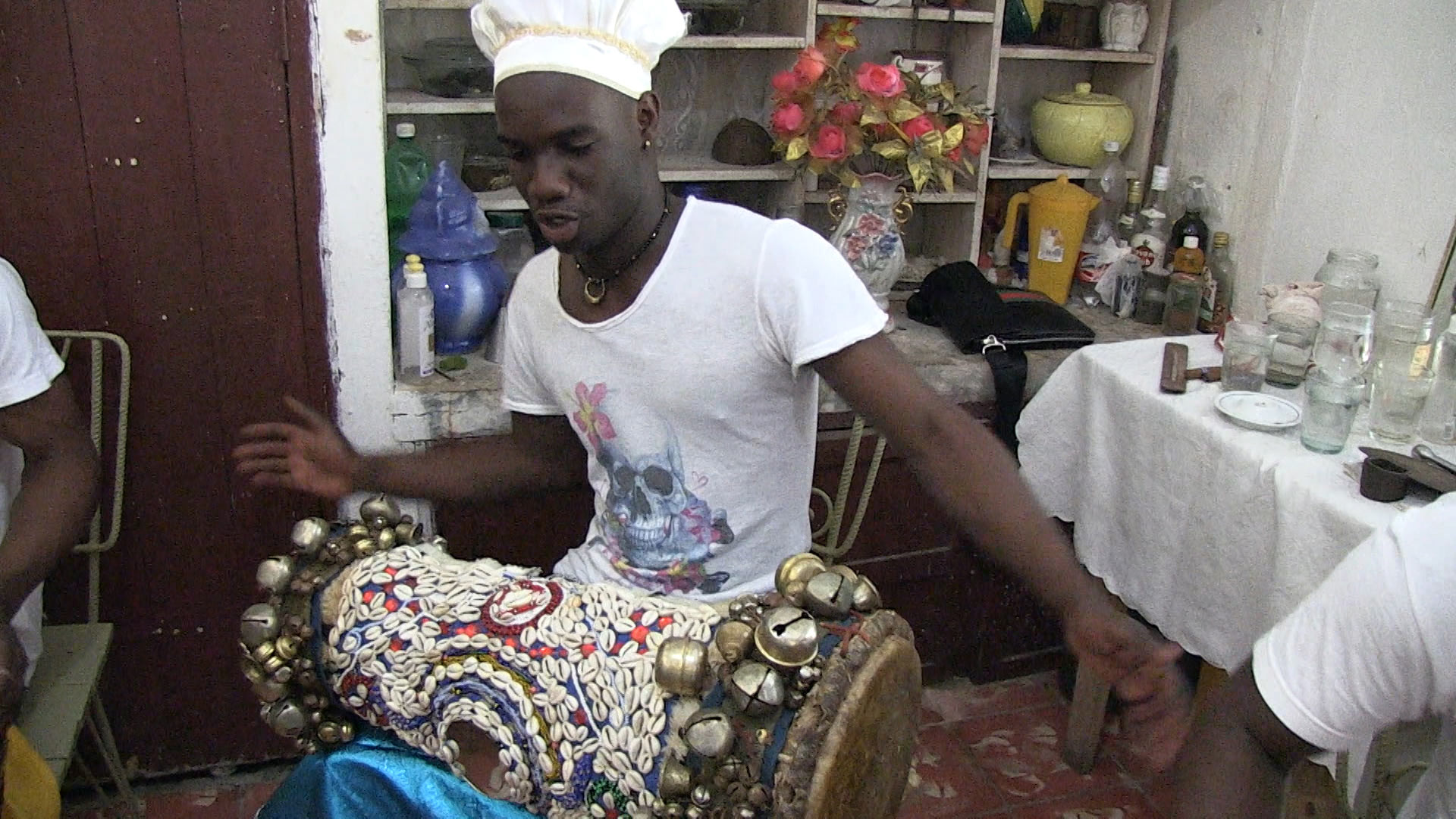 Bata drummer playing the lead Iya drum, in the temple of Yemaya, in former plantation of Álava in the Matanzas province of Cuba

Cross-fading between the sounds of humans, animals, insects, wind through the forest began to evoke for me the paintings of Cuban artist Manuel Mendive. Mendive’s images center on the sensual interaction of beings that are a mix of human, animal, and plant life. One figure may have the head of a bird and the body of a man. A tree might be nurturing people with its breasts and simultaneously being plucked of its fruit by a hovering bird. Without being aware of it at first, my work began to parallel Mendive’s paintings of folkloric myth and metaphor. People, animals, and landscape sounds were sonically blended and the assembly took a turn to become more of a dreamlike map of associations.

When an artist makes field recordings directed by his or her own interests and intuition, the results are shaped by those biases as much as the environment being sampled.

Finally, I had to question how to place myself in the map. When an artist makes field recordings directed by his or her own interests and intuition, the results are shaped by those biases as much as the environment being sampled. I find myself up at dawn, waiting like a hunter for that one call of an elusive owl. My breathing is unusually slow as I wait, as motionless as possible to avoid startling the wildlife. The focus of my attention shifts to the distant traffic, waiting for it to stop, so I can wade into the ocean and record the most detailed sound of bubbles fizzing as a small wave breaks. My sensation of hearing is heightened as I suppress the desire to talk to my local guides.

Additionally, in this age of anxiety around authenticity and appropriation, I questioned how to highlight my subjective experience, as “inauthentic” or out of place as it might be. I sought to express something of the wonder I felt, not just experiencing new sounds on site, but also learning the context in which those sounds exist. For example, in building the Matanzas Sound Map, I attempted to distill the feeling that arose as I walked through the former plantation of Álava, once owned by the Don Zulueta, the richest man in mid-19th-century Cuba. The sugar trade that provided sweetening and spirits for my native New England was being explained, and its songs, silences, and stories profoundly affected me as I dug deeper.

I created sounds for that internal experience in the studio. These pensive saxophone vignettes moved slowly, like clouds passing through the installation. The aforementioned transitions from rural landscape to urban voices were followed by a section comprising saxophone and electronic sounds, recorded to reflect some of the stillness and wonder I felt on site.

My multichannel sound/video installation The Other Map, excerpted for this post, demonstrates how recordings of nature, the human voice, and electronic recordings were sequenced to create a purposeful meditation on the sounds of Matanzas. Waves break gently in a rhythm suggestive of deep breathing. The voices of Andro Mella and Raphael Navaro follow, with extended silences I added between phrases to match the pacing of the waves. The excerpt ends with a saxophone and electronics vignette using the pacing of the ocean and meditative breathing. The video, shot on site, moves just as slowly and so appears to be digitally altered when in fact it, like the sound, is the result of weeks of extended observation and inquiry and noticing moments when reality appears to be an illusion.

The sonic cartography in these pieces relied on surveying a province in a purposeful way, engaging locals to help me understand the site’s history and to guide me to places where the sounds could be collected. This is much different than simply taking photos and video clips with my cellphone and pastiching a work together. Hopefully, as with the pieces discussed in the previous blog post, these sound maps will promote a focus on the specific environments and social milieu that produce these fantastic sounds. 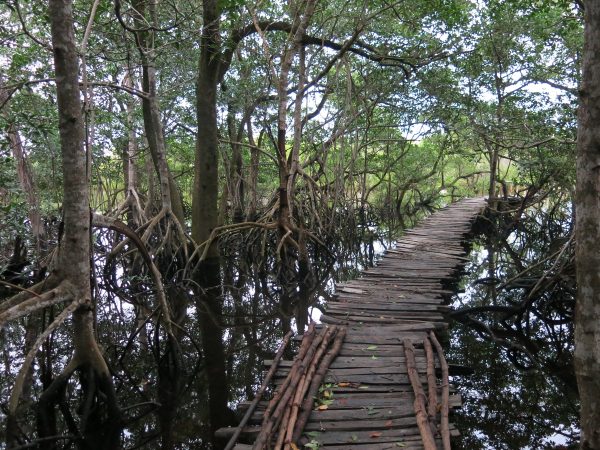 Lago de Maya, Matanzas Province Cuba. This bridge was since washed away during Hurricane Irma