Some Thoughts About Dorico The Morning After

We naturally only skimmed along the surface of the program during the event (and I haven’t had the chance to trial it), but even from the short presentation we had, Dorico looked incredibly deep and nuanced.

I’ll admit to being something of a notational geek.  Elaine Gould’s Behind Bars sits on my bedside table.  I collect contemporary scores.  I used to use Finale, then switched to Sibelius in 2005 after moving to London.

I don’t know any of its members personally, but it felt like a personal affront when Avid cut the Sibelius team.  And it felt akin to my team (Arsenal) winning the Premiere League (…insert joke here if you get the reference…) when I heard Cubase had scooped them up to build a brand new notation program.  All this is to say that, when I headed down to the Bush Theatre on October 18 to get my first full-on look at the new software, I was really excited.  I’m cheering for this entire experiment.

Let’s get a couple of things out of the way very quickly:

• Dorico looks fantastic. It reminds me of the layout of Adobe Software such as InDesign and Photoshop. I want it. It looks intuitive and sensible. It might give me fewer rage moments than Sibelius.

• Dorico is a piece of professional notation software. (Hopefully this is not a surprise.) However intuitive it might be, there are plenty of idiosyncrasies, and it would take anyone time to learn it, and to make it do the things that you want. (It will almost certainly still cause you some rage moments.)

If you want to understand the strengths (and weaknesses) of Dorico, begin with the team that built it.  At the preview event l attended last night, Daniel Spreadbury told us that, when they first gathered together, they started with three basic goals.  Here they are, with some initial thoughts on how they impacted the software:

1. To be able to compose directly into the software.

This is fundamental to many of the innovations Dorico has created, especially the emphasis on flexibility early in the engraving process. Thomas Hewitt Jones, whose new work Doric Overture was commissioned for and premiered at the beginning of the evening, highlighted “flows” (the initial engraving step in Dorico) as inspirational and important to him because it allowed him to create an idea directly within the software without worrying about the time signature/key signature/tempo/details of that idea, and also said that this flexibility meant he would compose the remainder of his current (music theater) project in it.

2. To have a graphical output that is as good as possible, and built from the heart of historical notation.

As I’ve already said, Dorico looks great. The “graphical clarity” and attention to detail from the team is really quite impressive.  The defaults look great and, wonderfully, there is a really deep emphasis on customizability.  We naturally only skimmed along the surface of the program during the event (and I haven’t had the chance to trial it), but even from the short presentation we had, Dorico looked incredibly deep and nuanced.  This is to a point where I would bet money that most, if not all, of the major publishers will be working from Dorico very soon after its official launch. [Ed note: UPDATE – An extremely detailed description of Dorico’s history and design was just posted on the independent Sibelius blog.]

3. Since they were working at Steinberg, home of Cubase they wanted a program that sounds as great as it looks. (“At its heart is an audio engine.”)

Dorico contains within itself a playback control panel that effectively looks like the sequencer you’re used to seeing in ProTools/Logic.  It has impressive audio support (VST Plugins, 32-bit floating-point resolution, more than 1,500 sounds, etc.).  There are really no two ways about this, this is a huge step forward for the playback and programming possibilities through a piece of notation software.

I think most of the people reading this site will come to this post with two questions:

• Should I (assuming you are now an experienced composer/performer/engraver familiar with Finale or Sibelius) spend the money and time inherent in making the switch to Dorico?

• Should I tell my new/young students to start with/move to it? (Or, if you’re not yet working with Finale/Sibelius, should you start with Dorico over these competitors?)

Obviously these questions are impossible to definitively answer without actually using the software.  Intuitively, though, I think the second question is fairly obvious.  Dorico looks to be a more modern program in how it interacts with sequencing, and while I’m not sure everyone is going to love everything about it, it’s definitely every bit as powerful as either Finale or Sibelius.  Let me put it this way: I highly doubt you’re going to find something you used to be able to do in Finale or Sibelius that you’re not going to be able to do in Dorico.

But what about the first question?  This is harder to answer, particularly because we didn’t really get to see Dorico go through its paces or answer any truly difficult notational questions.  The new commission by Hewitt-Jones was fun, but there is really no question it could have been engraved in Finale or Sibelius quite easily.  And it’s great that the software is so quick and fluid at entering the music of Chopin (and Beethoven, the printed example we saw), but I write music that looks like this: 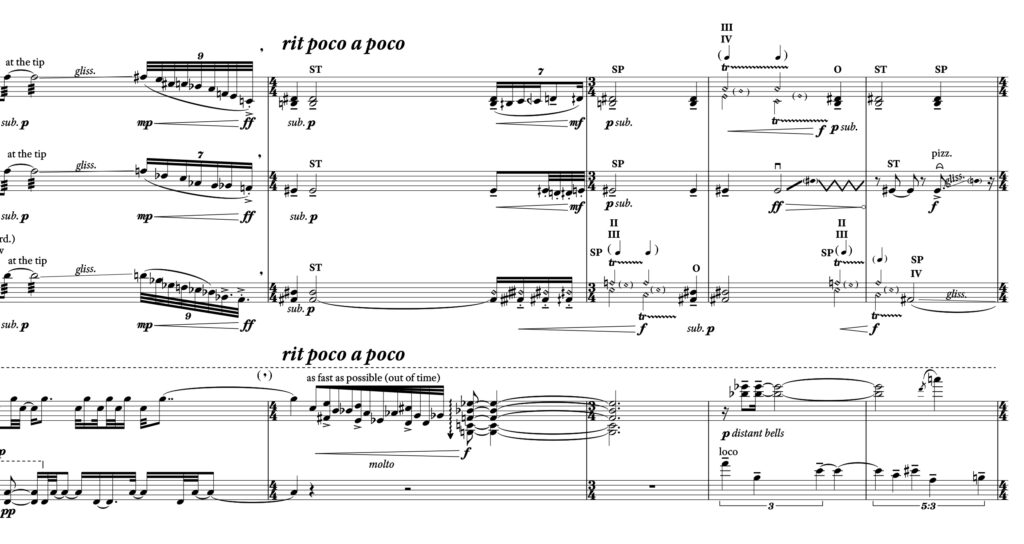 and The Riot Ensemble, from time to time, performs music that looks like this: 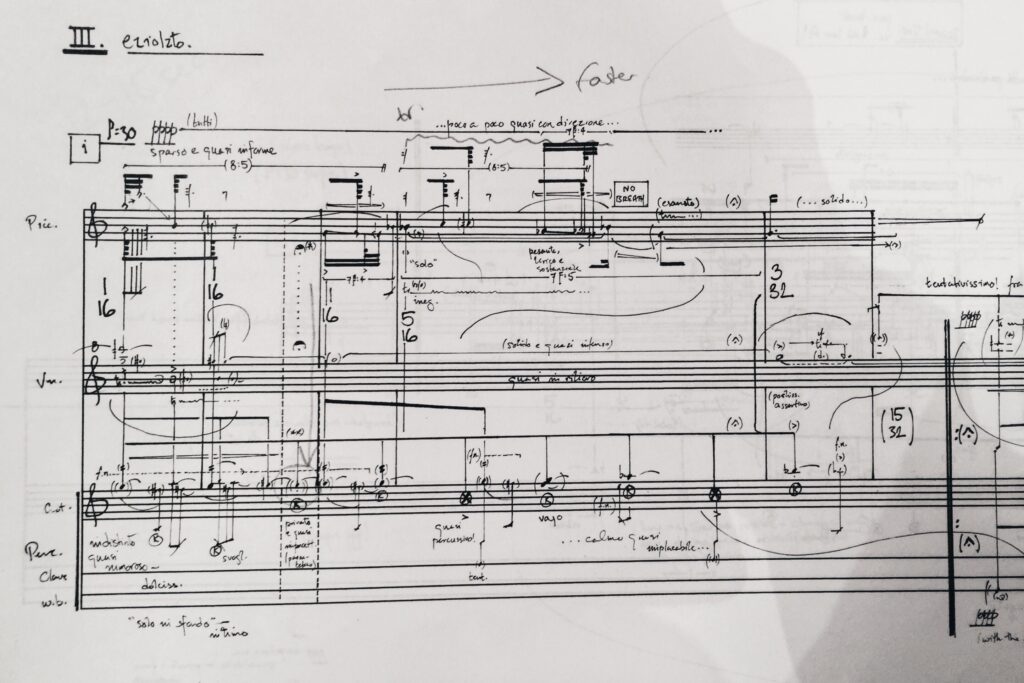 Now I don’t think Evan Johnson did that in Sibelius, but I made my score there, and while it wasn’t without its annoyances, my personal decision is probably going to come down to the price, unless the program really saves me a ton of time in producing this.

• I write all of my music by hand first, and only then enter it into an engraving software. So, when it comes to their priority of being able to compose directly into the software, I don’t do this and the many options that facilitate it don’t really speak to me.

• I also don’t expect (or even want) my engraving software to play this back to me.In all my roles (composer, conductor, teacher) I’m a bit reticent about this move toward smarter and “better-sounding” software, because it hasn’t ever captured anything of the performance reality in new (contemporary classical) music, plus it can (and does) make a lot of composers lazy and a lot of performers lives a lot harder.  I’m involved in seeing and performing a lot of new scores each year with The Riot Ensemble, and without wanting to labor the point, we can tell really quickly when a composer is relying on the computer playback or notation engines.

So, I guess the summary is: be excited.  This is a really good-looking piece of software that has a lot of promise.  Do try it, and then you’ll have to see if it works for you.  I certainly will do this, and if NewMusicBox will have me, I’ll be back with further thoughts once I have!