So You Want To Write An Opera….

I admit I attempted composing for opera long ago as an undergraduate. I remember seeing the Los Angeles Opera’s production of Billy Budd in the late ’90s and then seeing their production of Peter Grimes in the early 2000s, and I was convinced I absolutely had to write an opera.

What I didn’t know at first was that much of Cincinnati’s musical history was vocal: Cincinnati is home to the Cincinnati May Festival, which dates back to the 1840s when Saengerfests were held in the city. And, like I’ve mentioned, it is home to the second-oldest opera company in the states. Even though I decided to attend the University of Cincinnati’s College-Conservatory of Music because of its composition program, conveniently it has one of the top opera programs in the country. This inspired me to pick up my previous try at opera writing.

Apparently I didn’t know what I was doing, and neither did my librettist at the time. She adapted a short story of hers into singable prose about a college student who brought home a fish that looked like a naked man. (Just so we’re clear, it is questionable when your roommate brings home a naked man-fish and puts him in your apartment’s bathtub, and it is equally questionable when singable prose is converted into an opera.)

Anyway, my first opera was to be a surreal comic opera, except that there were four potential endings, no exit strategy, and I quickly realized the project was way over my head, so I hurriedly and awkwardly finished only the first scene (and the piece remains unfinished to this day). However, as Hartke pointed out via email a very long time ago, sometimes pushing yourself and working on projects that are completely over your head help you grow as an artist.

Anyway, as I have mentioned before, school wore me out (or maybe my first opera attempt did!) and so I took a break from school (or quite possibly the opera). And when I arrived in Cincinnati, I was greeted by graduate singers who could actually act on stage.
Therefore, the idea of writing contemporary opera was rekindled like you would not believe. I actually thought this could happen. I told a few people at the MusicX Festival in 2010—inadvertently including Hartke himself—that I wanted my future dissertation to be an opera. During one of our meals, someone asked what my dissertation would be. I attempted to answer.
Me: “Well…”
Hartke (staring at me directly): “I know that look.”
Me: “What look.”
Hartke: “The last time you had that look, you wanted to write an opera.”
Guilty as charged.
Back in Cincinnati, my professors told me I needed to contact the school’s music director to let her know I was interested in starting an operatic project. The worry was that my future work would conflict with the school’s complex opera season. So, I met with her (after a ridiculous number of email attempts) and she actually seemed somewhat excited that a couple of graduate students wanted to write operas. She told me to send her a synopsis, a cast list, a libretto, and my sketches. I did.
And then nothing happened.
I decided to contact her again, and after even more email

attempts, we finally met. This time she encouraged me to apply to Opera Fusion: New Works, a program in which both the Cincinnati Opera and the College-Conservatory of Music collaborate to workshop exciting new operas. Except I knew they were never going to select me: the last few featured operas included composers such as Douglas Cuomo, Terence Blanchard, and Ricky Ian Gordon and librettists such as John Patrick Shanley. Because this girl has not won a Pulitzer Prize, I knew my chance for getting my opera read through this program was slim. 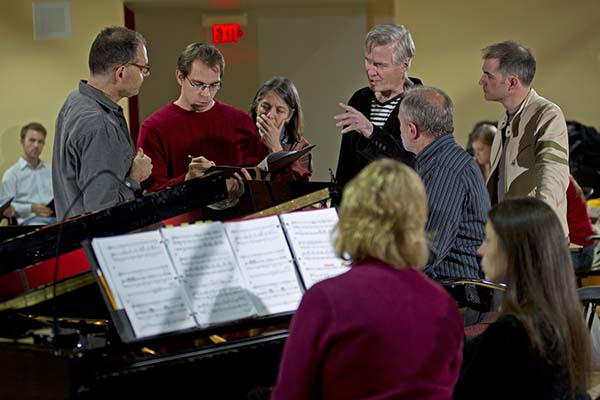 So then, when I was asked along with a handful of other student composers to create a short American opera for Washington National Opera’s inaugural American Opera Initiative, I jumped on the opportunity. My librettist (the same one from my undergraduate days!) almost instantaneously invented what I believe (and still believe) was an ingenious topic—an opera about the housing bubble. We submitted our proposal and thought we totally had this.

And oh yes, we were totally rejected.
I believe there comes a time when you become so completely haggard and worn from rejection that you may take a good look at your life and realize that maybe you’re going to write the dang opera anyway. And that maybe you live in a town that has an abundance of good singers who act, and that maybe they can perform this future opera. And maybe you and your librettist from your undergrad days think it’s not a bad idea to found a starter opera company in your backyard, especially when your backyard has this wonderful vocal tradition ingrained in its soil. And maybe you and your librettist are crazy enough to actually do it.