Could it ever be possible to comprehend narrative meaning through the sense of smell, and even if it were, would audiences ever accept an emancipation of stench?

I briefly ran the science club during my senior year of high school. Ironically I wasn’t all that into science at the time, but I had just started becoming obsessed with musique concrète, the harmonic series, and Stockhausen-brand serialism, all of which had an aura of laboratory experimentation and sci-fi. But it was ultimately a bad fit—while I tried to get the science nerds who joined up interested in building new instruments that could play intervals derived from pi, they kept asking when we’d start dissecting frogs.

One rainy afternoon, though, a couple of us had a deep think about why sophisticated art forms developed for some senses (seeing and hearing) but not for the others. Was it based on the limitations of human perception or did we just not have the proper tools? (To me, decades later, these questions feel like they’re straight out of Samuel R. Delany’s extraordinary novel Babel-17, which unfortunately none of us had yet read at the time.) Could there be a way to capture aromas the same way that Edison captured sounds with the phonograph, so that an olfactory experience could be readily accessed the same way as, say, Charles Ives’ 4th Symphony or the original cast album of Sweeney Todd? Or barring reproducibility, could there at least be a way to coordinate the one-time release of specific aromas into the audience, the way the instruments in an orchestra release specific sounds? My involvement with the science club ended soon thereafter—I couldn’t deal with vivisection—but I never stopped thinking about the possibility of “nose music.”

Fast forward to yesterday afternoon when I showed up at the Guggenheim fresh off a plane from Hong Kong to experience Green Aria – A ScentOpera, created by “librettist” Stewart Matthew in collaboration with perfumer Christophe Laudamiel and co-composers Nico Muhly and Valgeir Sigurdsson. I had no idea what to expect and was frankly worried I’d pass out as soon as the lights were dimmed. But I remained completely attuned to what was going on the whole time, though now I find myself uncharacteristically at a loss for words to describe it using written language, so bear with me. 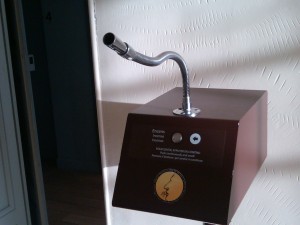 This “scent microphone” housed in the perfumery museum in Grasse, France, is very similar in both appearance and function to the devices that were attached to the seats of the Guggenheim for their presentation of a “Scent Opera.”

Each seat in the Guggenheim’s basement concert hall was equipped with what looked like a gooseneck microphone. But rather than amplifying sounds, these Rube Goldbergian devices transmitted different aromas pumped into them from a “scent organ” designed by the ventilation manufacturing company Fläkt Woods. In under an hour, the audience was bombarded with a sequence of various scents—some extremely satisfying, others quite intense and difficult to take for long—to the accompaniment of parallel musical motives to help in their identification. While I wasn’t completely able to follow the pre-explained narrative exclusively through my nose and ears, it was still one of the most extraordinary experiences I’ve ever had. And like the greatest works of art in any medium, it asked way more questions than it answered.

I began to wonder if it could it ever be possible to comprehend narrative meaning through the sense of smell. They called it a “ScentOpera,” but to me it was less dramma per musica than nasal symphony. But if it is somehow parallel to music, could there be aromatic analogues to things like harmony? Combining aromas frequently leads to a new aroma, more like mixing colors, rather than a perceptible simultaneity like a major triad. During a pre-“concert” talk, Stewart Matthew acknowledged that in order for aromas to be perceived they have to be emitted slowly, since one’s ability to smell something is predicated on one’s breathing cycle. So there could never be fast-paced odorama. But does that mean there can never be an olfactorily perceptible rhythm?

I already mentioned that some aromas were less than aesthetically pleasing to me—one called “Funky Green Imposter” was actually unpleasant at times, but it’s the one I still remember the most vividly one day later. But none was an out-and-out stinker. One of the most unforgettable memories of my entire life was the inescapably wrenching putrefaction of the tanneries of Fes, Morocco, but could such an aroma ever be incorporated into a bona fide “work of art”? Contemporary visual art is rather “anything goes”. And in music, Schoenberg began the emancipation of dissonances that Cage subsequently took to its logical sonic end. I love looking at many abstract expressionist paintings and to my 21st-century ears things like tone clusters, wildly out of tune collections of intervals, and even white noise are sonic joys. But I will never learn to love the stench of sewers.

After the performance, I wandered through Central Park in a daze which I think was more a result of the aroma overload than the jetlag—I was constantly distracted by the smell of people’s perfume, cigarettes, various leaves, etc. Things I normally took for granted and tuned out had heightened meanings but there was no overarching context for them beyond what they were, so it was all somewhat confusing to me. I was looking for (actually smelling for) meanings that weren’t there. Pauline Oliveros’ deep listening teaches us to appreciate sound as all-encompassing, but is deep smelling possible or even something we’d want to engage in?

When I finally returned home, I still couldn’t get certain Green Aria aromas out of my head: like Chaos, which to me smelled heavenly; Evangelical Green, which was cloyingly plant-like; and the aforementioned Funky Green Imposter which smelled somewhat burned. I drank a beer hoping to make these aromas go away, but it tasted funny to me. I later went out for dinner but the flavors of my meal were also totally altered. If aroma intake is that powerful an experience, it would be difficult to experience more than one work created to be experienced that way since the first one would inevitably influence all subsequent perception.

I’m not sure where to take it from here, but I kinda wish I was back at the science club and that we all had access to that Fläkt Woods contraption.