Sixteen Jazz Composers’ Works to be Performed by Three Orchestras

Between May and September, three different orchestras will give public readings of new works for symphony orchestra written by a total of sixteen jazz composers as part of the third Jazz Composers Orchestra Institute (JCOI) Readings.

Between May and September 2016, three different orchestras will give public readings of new works for symphony orchestra written by a total of sixteen jazz composers as part of the third Jazz Composers Orchestra Institute (JCOI) Readings, a program coordinated by EarShot, the National Orchestra Composition Discovery Network. In addition to the reading sessions, the activities at the three orchestras—the Naples Philharmonic (May 25 and 26), American Composers Orchestra (June 15 and 16), and the Buffalo Philharmonic Orchestra (September 20 and 21)—will involve a variety of workshops and other opportunities for the participating composers.

The 2016 JCOI Readings are the culmination of a process that began in August 2015, when 36 jazz composers of all ages were selected from a national pool of applicants to attend the weeklong JCOI Intensive, a series of workshops and seminars devoted to orchestral composition held at the UCLA Herb Alpert School of Music in Los Angeles. After completing the Intensive, sixteen composers were given the opportunity to put what they learned into practice by composing a new symphonic work. The composers, working in jazz, improvised, and creative music, were chosen based on their musicianship, originality, and potential for future growth in orchestral composition. Each composer will receive coaching from mentor composers and a professional music engraver as they write their new works. Composers will also receive feedback from orchestra principal musicians, conductors, librarians, and mentor composers, throughout the readings. Each of the three orchestras will workshop and perform between four and seven composers’ new works.

The Naples Philharmonic readings will take place at Artis-Naples Hayes Hall, with mentor composers Vincent Mendoza (composer/arranger), James Newton (JCOI Director; University of California, Los Angeles), and Derek Bermel (Artistic Director, ACO). The featured composers’ works will be conducted by Naples Philharmonic Assistant Conductor Yaniv Segal. The participating composers are: Robin Holcomb (b. 1954), a Seattle-based composer and singer/songwriter whose music draws on both her childhood in Georgia and her stints working among avant-garde musicians in New York and California; Sonia Jacobsen (b. 1967), a much-awarded composer, jazz saxophonist, and founding director of the New York Symphonic Jazz Orchestra currently based in Chapin, South Carolina; Yvette Jackson (b. 1973), a composer, sound designer and installation artist focused on radio opera and narrative soundscape composition from La Solla, California; and Brooklyn-based performer and composer Nathan Parker Smith (b. 1983), who leads the Nathan Parker Smith Large Ensemble which performs throughout New York City.

The Readings will include an open, working rehearsal on Wednesday, May 25 at 2pm, and a run-through of the composers’ pieces on Thursday, May 26 at 7pm. Both events are free and open to the public. 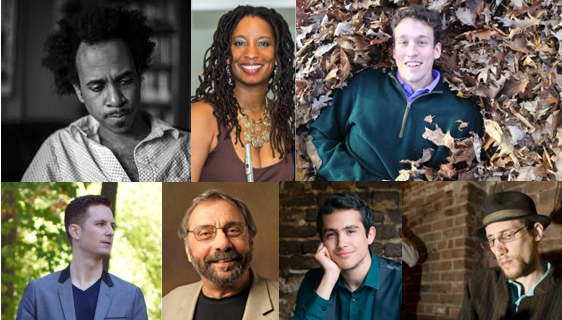 The Readings will include a private, working rehearsal on Wednesday, June 15, and a run-through of the composers’ pieces on Thursday, June 16 at 7:30pm, which is free and open to the public (reservations suggested).

The participating composers are: Amina Figarova (b. 1966), an Azerbaijan-born, New York-based pianist and composer who studied classical piano performance at the Baku Conservatory as well as jazz performance at the Rotterdam Conservatory, Netherlands, and attended the Thelonious Monk Institute’s summer jazz colony in Aspen; Gene Knific (b. 1992), a pianist, composer, and arranger based in Kalamazoo, Michigan who has won seven DownBeat awards for his performances and compositions; Los Angeles-based saxophonist and composer Hitomi Oba (b. 1984), who holds an MA from UCLA in Music Composition and whose album, Negai, received a Swing Journal jazz disc award; London-born, Philadelphia-based Anthony Tidd (b. 1972), who has performed with Steve Coleman, The Roots, Rudresh Mahanthappa, Wayne Krantz, Meshell Ndegeocello, Common, and Jill Scott, and has produced albums by The Roots, Macy Grey, Zap Mama, and The Black Eyed Peas; and Buenos Aires-born, Brooklyn-based Emilio Solla (b. 1962), who has recorded more than 40 albums performing with Paquito D’Rivera, Arturo O’Farrill, Cristina Pato, and Billy Hart, and whose latest album, Second Half (2014), was nominated for a 2015 Grammy Award for Best Latin Jazz Album. The Readings will include a private, working rehearsal on Tuesday, September 20, and a run-through of the composers’ pieces on Wednesday, September 21 at 7pm, which is free and open to the public.

*
JCOI is a new development in the jazz field, led by ACO in partnership with the UCLA Herb Alpert School of Music in Los Angeles and the Center for Jazz Studies at Columbia University in New York. While many jazz composers seek to write for the symphony orchestra, opportunities for hands-on experience are few. Since the first JCOI readings in 2011 and with these new sessions at three orchestras, nearly 100 jazz composers will have benefited from the program and so far 27 new jazz works for orchestra have been created and workshopped. EarShot, the National Orchestral Composition Discovery Network, initiates partnerships with orchestras around the country; provides consulting, production, and administrative support for orchestras to undertake readings, residencies, performances, and composer-development programs; identifies promising orchestral composers, increasing awareness and access to their music; supports orchestras’ commitment to today’s composers and enhances national visibility for their new music programs. EarShot is coordinated by American Composers Orchestra in collaboration with American Composers Forum, the League of American Orchestras, and New Music USA. It brings together the artistic, administrative, marketing, and production resources and experience of the nation’s leading organizations devoted to the support of new American orchestral music.