Shall We Sing? Musiqa Marks Its 10th Anniversary
NewMusicBox
Written By

Shall We Sing? Musiqa Marks Its 10th Anniversary

Given the bigness of Texas, and in the interest of giving a sense of what’s going on throughout the region, I’m going to occasionally travel outside of Austin to explore other offerings. Among the heavy hitters in Houston is Musiqa, a new music organization run by professors from Rice and the Moores School at the University of Houston.

If you’re headed west on I-10, the first highway sign you pass as you leave Louisiana and enter Texas says “Orange 3, El Paso 856.” Texas is well known for its big open ranges, but it’s particularly striking if, after you make it all the way across to El Paso (which will take around 14 hours by car), you reflect on the fact that despite all that time on the highway, you’re still in the same damn state.

Given this bigness, and in the interest of giving a sense of what’s going on throughout the region, I’m going to occasionally travel outside of Austin to explore other offerings. Among the heavy hitters in Houston is Musiqa, a new music organization run by professors from Rice and the Moores School at the University of Houston. In addition to the presentation and commissioning of new music, Musiqa concerts also regularly feature dance, readings, film, and plays. In the ten years since its founding, Musiqa has put on hundreds of concerts and it can boast one of the strongest educational outreach programs in the country. Despite my reservations about seeing anything run by college professors, (I kid! I kid!) I loaded up the car and pointed it east to hear the opening concert of Musiqa’s 10th anniversary season.

The evening’s program centered on the theme of American songs of the last two centuries, and began with the premier of Musiqa Miniatures, a short five-movement piece scored for that popular 21st-century chamber combo, the Pierrot ensemble. Each movement was written by one of the five directors of Musiqa, and they were played without pause. Despite its various authors, Miniatures held together well as a piece for reasons that became clear when conductor Robert Franz turned to welcome the audience at the close of the work. He explained that because it was Musiqa’s 10th anniversary, the directors decided to write Minatures on the theme of a certain song that is traditionally sung at birthday parties. You may have heard of it, but you’ll rarely see it listed on programs by its given name. Even John Harbison’s Songs America Loves to Sing (which we heard later that evening) features a take on this piece, but labels it Anniversary Song. Franz then said that because the piece was so brief and because it was the world premier, they would like to play it again for us. This was received with loud applause and there was occasional laughter as the theme popped its head up during the second run. I’ll admit to laughing as loud (and being as charmed) as anyone in the place, and I’ll also admit that I did not pick up on the theme the first time around. I just thought I was hearing a bright, colorful, extraordinarily well-rendered chamber work. So congrats Musiqa, you got me! (shakes fist in the air…)

Musiqa Miniatures, second time through.
The concert continued with Harbison’s Songs America Loves to Sing, which is a ten-movement work featuring alternating solos and canons. Harbison’s take on “Amazing Grace” echoed shades of Copland, the slowly breathing flute lines performed here by Leone Buyse. Stoic chords beautifully played by pianist Tali Morgulis in “What a Friend We Have in Jesus” complimented Maureen Nelson Hawley’s violin part, which twisted and turned almost as a soloist in a choir of other players. “Poor Butterfly” caught me off guard in that it seemed to start off with clarinetist Michael Webster looking off into the distance, perhaps in hopes of finding our friend the butterfly. After a moment or two it became clear that the butterfly he was looking for was the one running the lights, specifically the one that was a bit too low for him to see his page. Once that wrinkle was ironed out, Webster’s rendition of the piece showed his incredible control of his instrument and clear, warm tone.

The second half of the concert began with a reading by author Justin Cronin of an excerpt from his novel Mary and O’Neil. The reading, about a cancer patient and her family, was touching without being overly melancholy and provided a great change of pace and focus in the concert. 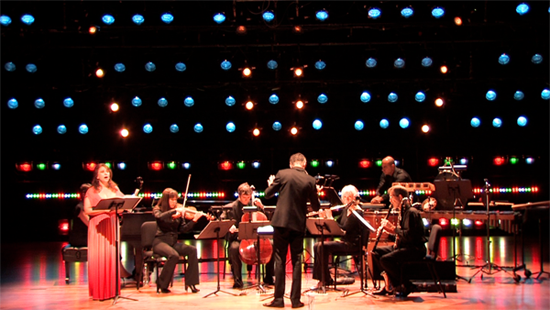 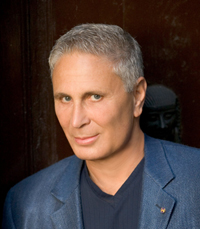 John Corigliano’s Mr. Tambourine Man was introduced by way of a “period” performance of “Blowin’ in the Wind” featuring soprano Karol Bennett with Robert Wolf on guitar. This gave some historical perspective, though Mr. Wolf’s decision to not let vi come out and play with I IV V in the chorus was just a little bit too bad.(*) Mr. Tambourine Man’s seven movements (we heard five here) are available for performance in a variety of ensemble shapes and sizes, and Musiqa presented the chamber version. Beginning the cycle, the title track kicked up its syncopated heels and was twirled and dipped with confidence by Bennett’s strong and confident delivery before shuffling off all Gnarly Buttons into the ether. “Blowin’ in the Wind” starts with a light touch before revealing itself as something of a slow march. Layered bass figures that descend heavily throughout much of the movement are contrasted by the ethereal nature of the chorus, which does sound distant and not too little like the wind. The tension and dread leads perfectly to the full frontal attack of “Masters of War” which explodes out of the gate and, despite a brief respite in the middle, really does not let up. These were followed by “All Along the Watchtower,” and “Forever Young,” the last standing in contrast from the preceding material. Closest to its folk cousins, it makes for a very pleasant and peaceful ending to a dramatic work that has quite a few wonderfully pointy parts.

Among the most striking features of the concert was the average age of the audience. Typically at chamber music concerts in this area this number might be, oh, I don’t know…let’s say north of 60, but there were dozens of people in their late teens/early twenties at this performance. Now, given the folks driving this ship, I’ll bet that there might be a student or two among those kids, but it was still refreshing to see so many people who know how to operate a cell phone listening intently to what was offered. The addition of the reading, the appearance of a number of the directors during the concert to announce pieces and talk with the audience, and the generally laid-back atmosphere (about as laid back as you can be at the swanky Hobby Center) served to further connect the audience with the material and the performers. Unfortunately I was unable to stay for more than a few minutes of the post-concert talk, but watching Karol Bennett sit on the edge of the stage, legs casually swinging as she answered questions from an audience that had coalesced around her and the other performers, it occurred to me that while this is the 10th anniversary for Musiqa, in the grand scheme of things it’s just the beginning.

* It’s come to my attention that the original version of “Blowin’ in the Wind” in fact did not contain the vi chord that is found in so many other performances of the piece. Therefore the description of Robert Wolf and Karol Bennett’s performance as a “period performance” was even more spot on than I knew! Kudos to Mr. Wolf!—AS