By lowering the barriers of cost, time, and distance, Chamber Music Day offers a zero-commitment way for audiences to hear a wide variety of Bay Area musicians, including those they aren’t familiar with. 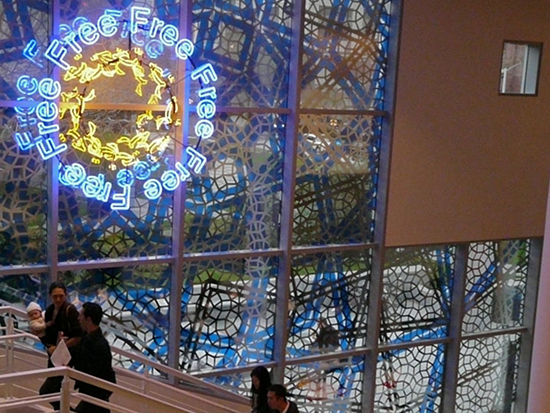 Taraneh Hemami’s installation FREE at the Yerba Buena Center for the Arts.

By a happy coincidence, the large neon and steel installation by Iranian-born, San Francisco-based visual artist Taraneh Hemami titled FREE (which celebrates the transformative events of Arab Spring with text in both English and Arabic) was hanging over the lobby of the Yerba Buena Center for the Arts during Chamber Music Day, a free seven-hour extravaganza of performances. Chamber Music Day is an annual event that the San Francisco Friends of Chamber Music has been putting on since 2008, in a different venue each year. This year’s event, co-presented by YBCA, took advantage of multiple spaces in the arts center, using both the main theater (best known to the outside world for the many Apple products launched from its stage) and the multi-use Forum, as well as a screening room, a lounge, and lobby spaces, for performances and demonstrations for seven hours on a Sunday afternoon. Audience members were encouraged to shuttle freely among the forty or so scheduled performances, which took place throughout the campus in short 20- to 30-minute concurrent sets. By lowering the barriers of cost, time, and distance, Chamber Music Day offers a zero-commitment way for audiences to hear a wide variety of Bay Area musicians, including those they aren’t familiar with.

While there is plenty of Haydn, Mozart, Beethoven, and Brahms to be heard during Chamber Music Day, the event specifically aims to include music beyond those expected boundaries, identifying early and baroque, classical, contemporary, improvisation, and world/jazz as subcategories for the day. Given YBCA’s multidisciplinary interests as a center for visual as well as performing arts, this year’s Chamber Music Day (November 18) also included a full afternoon’s slate of short films with live musical accompaniment, in most cases by the composers themselves. 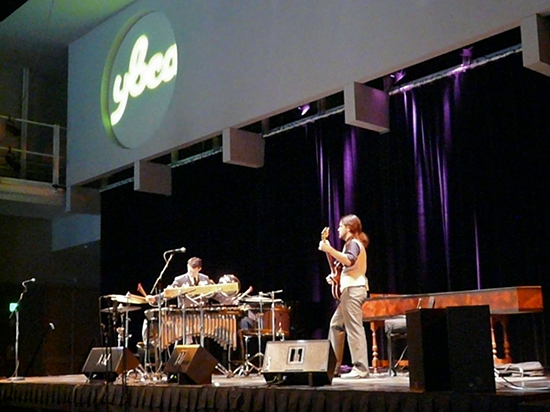 “I just can’t stand what passes for music by most modern composers. Noise is noise from a car, bus, or flute. Still, I loved the traditional music and that odd little piece about the bird.” –Ralph (from the SF Friends of Chamber Music’s refreshingly frank audience comments page)

Among the first things I heard that afternoon was a performance of John Cage’s Concerto for Piano given by the San Francisco Contemporary Music Players and before I encountered a single note of Beethoven. Among those included under the contemporary, improvised, and jazz music umbrellas at Chamber Music Day were guitarist/composer John Shiurba’s [email protected] project, excerpts from Francis Wong’s Diaspora Tale #2, guitar and percussion duo The Living Earth Show, Beth Custer’s clarinet quartet Clarinet Thing, and Grosse Abfahrt, an improvisation by six musicians led by trumpeter Tom Djll, which seamlessly melded electronic and acoustic sounds. Particularly entertaining was a set by WiENER KiDS, a jazz trio of two saxophonists and drummer, and composer Jordan Glenn, who introduced a gentle, intimate piece by saying they were about to play “a ballad called My Bike.” 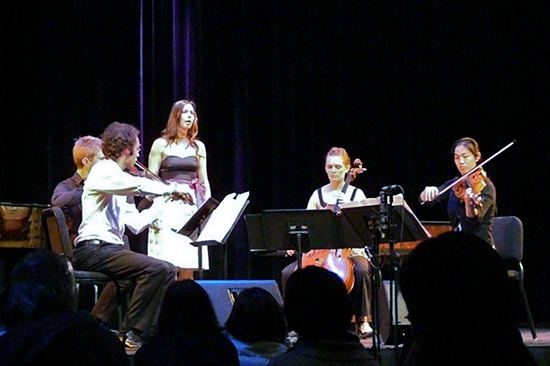 Given the multiple performance spaces, it was of course possible to hear only a small selection of the day’s offerings. Among those performers working with fully notated contemporary music was Vocallective, a group of young musicians recently founded by clear-voiced soprano Indre Viskontas, performing a set of three works by Osvaldo Golijov, including two pieces for soprano and chamber ensemble and Tenebrae for string quartet. San Francisco Performances, one of the Bay Area’s premiere presenters of chamber music, also brought mezzo-soprano Laura Krumm, a San Francisco Opera young artist, into the theater to reprise some selections from Jake Heggie’s song cycle Camille Claudel: Into the Fire which she had performed at a recent salon performance. 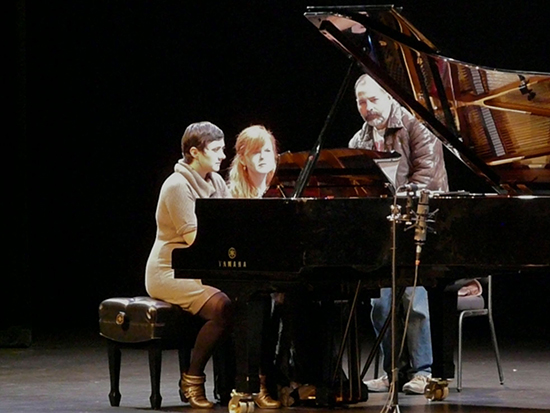 Regina Schaffer and Sarah Cahill (L-R) playing Terry Riley in the YBCA Lam Research Theater (with composer Luciano Chessa, who was called up from the audience to fill in for an absent page turner.)

Towards the end of the day, Sarah Cahill and Regina Schaffer took the stage in the theater to perform two four-hand piano works that Cahill had commissioned from Terry Riley, Waltz for Charismas and Etude from the Old Country. Cahill and Schaffer have been programming these works regularly in concert and are preparing to release recordings. Cahill introduced them by reading a brief note from Riley about the pieces:

In the days before radio and television, homes across the United States had pianos in the parlour, and families entertained themselves with music for four hands at one piano. My new four-hand piano works were written in the hope that people will throw their televisions out the window and return to activities that will bring spirit, content and meaning to their lives.

Of course, it would take some serious chops to play these challenging and passionate pieces in one’s parlor, and I was happy to sit back and allow Cahill and Schaffer to bring their spirited performance to my ears. 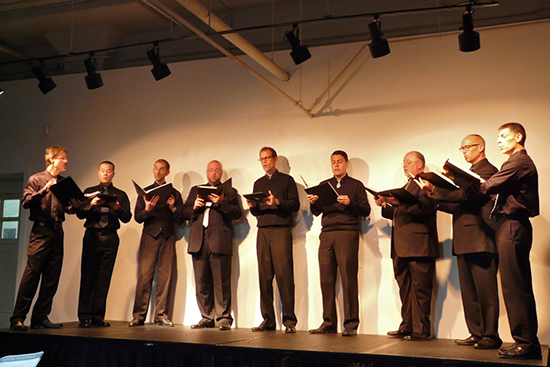 Clerestory in the Fleet Room at Fort Mason Center in San Francisco.

For all the undeniable benefits of bringing audiences into a space to hear music they wouldn’t necessarily encounter on their own, a lively, unfettered, and varied event like Chamber Music Day does pose some challenges for both performers and audiences. For the musician, the quick turnovers between sets and limited time for sound checks occasionally did not benefit the performances; and from the listener’s standpoint, the constant movement of audience members and the brevity of the sets sometimes made it difficult to focus one’s ears, especially for quieter performances.

Fortunately I had had the opportunity to hear Clerestory, a men’s unaccompanied vocal ensemble, perform their Chamber Music Day set as part of a solo concert earlier this fall in a more controlled setting. This finely tuned ensemble, which includes countertenors singing up into soprano range, was formed in 2006 by Jesse Antin, a alumnus of Chanticleer. (Nearly all of Clerestory’s other singers have spent some time with Chanticleer as well.)

Clerestory opened their seventh season this fall with their first-ever commission, a 25-minute cycle of six Herman Melville poetry settings by Seattle composer Eric Banks titled These Oceans Vast, which was the centerpiece of a sea-themed program. (All of the concerts were presented in venues with broad views of the ocean and San Francisco Bay.) Throughout much of the work, Banks uses either small repeating gestures or stacked clusters to establish a slowly undulating bed over which the text is delivered, sometimes in melodies delivered by one or two singers, and in the particularly successful second movement, in a close four-part canon through which the sailor narrator’s mind tries to brush away fear by nervously chattering “Give me the nerve… Give me the calm.” Banks saves a rare moment of homophony until the end of the fourth song, where the narrator, full of yearning for his beloved at this point in his long voyage, calls out, “O love, O love, these oceans vast!”

Clerestory (pronounced “clear story,” referring to high cathedral windows) has built their audience in part over the years by generously posting recordings of all their concert programs on their website. These Oceans Vast can be streamed in its entirety or downloaded here.