This is the second season in SFCMP’s 42-year history that has been under the artistic direction of Steven Schick, the longtime champion of contemporary music for percussion. Given the enthusiasm surrounding this Reich program, it will be interesting to see what other interests Schick and SFCMP can tap into as his tenure progresses.

I’ve never seen the lobby of the San Francisco Conservatory of Music as crowded as on January 28 before the San Francisco Contemporary Music Players’s concert of music by Steve Reich, built around Reich’s magnum opus Music for 18 Musicians. SFCMP had completely sold out the conservatory’s 450-seat concert hall in advance: it became one of those events where numerous people suddenly turned to Facebook the morning of the show to cast about for tickets. There was a sense of anxious jostling while trying to get into the performance hall that we don’t usually associate with new music concerts. This is the second season in SFCMP’s 42-year history that has been under the artistic direction of Steven Schick, the longtime champion of contemporary music for percussion. Given the enthusiasm surrounding this program—titled “Confirmation,” a reference to Reich’s pithy response when asked what he had gained after his 1970 trip to West Africa—it will be interesting to see what other interests Schick and SFCMP can tap into as his tenure progresses. 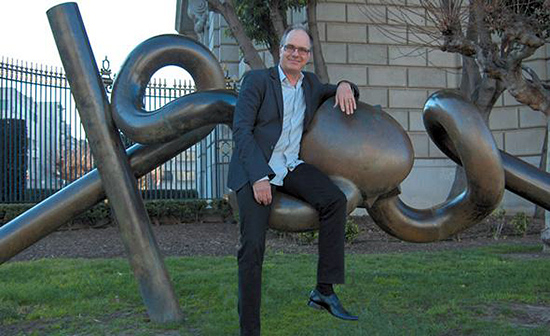 The repertoire was a reprise of a concert Schick had presented a year ago at University of California, San Diego (where Schick is a professor) with his new music ensemble red fish blue fish, augmented with members of the Bang on a Can All-Stars. Here, the core musicians were members of SFCMP, who were joined by conservatory students. The student musicians’ contribution to this effort was not insignificant: for Music for 18 Musicians, five of the percussionists, two pianists, and the four vocalists were drawn from the student body. (All told there were 21 musicians on stage.) It was an admirable example of this professional ensemble integrating its work with an educational institution to create an opportunity that would have been difficult to realize without SFCMP and Schick’s guidance.

The evening opened with the three percussionists of SFCMP—William Winant, Daniel Kennedy, and Christopher Froh, all pioneering musicians in their own right—and Schick performing Clapping Music, which began before the applause welcoming them to the stage had died down. It was performed two on a part, with Schick and Kennedy taking the base track and Winant and Froh moving out of phase. The musicians approached it with a sense of playfulness that would seem out of place with a pure process piece if it weren’t so purely enjoyable to see and hear four guys who clearly enjoyed the physicality of rhythm making sounds simultaneously simple and complex with just the skin on their hands. 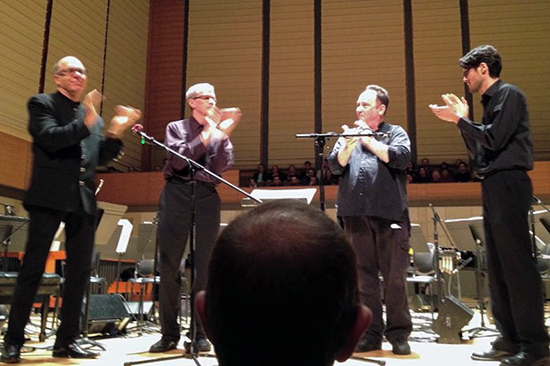 The Conservatory Guitar Ensemble, under the direction of SFCMP guitarist and professor David Tanenbaum, followed with Electric Counterpoint, featuring conservatory alumnus Travis Andrews performing the solo part. While the piece was originally written for one musician prerecording ten guitar parts and two electric bass parts and then playing the eleventh guitar live in concert, this performance featured Andrews and the two bassists playing electric instruments with twelve members of the ensemble playing acoustic guitars. As the piece is built on a series of canons, the timbral differences between the electric and the acoustic instruments plus the spatial displacement of the electric instruments made for a disjointed listening experience where the various canonic lines (though sensitively played, especially in the second movement) failed to present in a balanced and unified way. At the top of the show, there was an announcement that the sound check had been limited due to a scheduling conflict with the hall, which may have contributed to this issue.

The hour-long Music for 18 Musicians (online score here) filled the rest of the program. I will assume that most NewMusicBox readers are familiar with this massive work, for two string players, two clarinetists, four treble voices, four pianos, three marimbas, two xylophones, and vibraphone. (Schick, on vibraphone, and SFCMP clarinetist Jeff Anderle, a Bay Area new music mainstay, took the cueing roles.) I suspect, too, that most NewMusicBox readers have already formed their own opinions about this piece since its first performance in 1976; for me, working as a production assistant on the 1997 Nonesuch recording of Music for 18 remains one of the greatest fortunes of my musical life, and I count myself among those unabashed lovers of this transcendent work that breathes and pulses like an organism.

There were some balance glitches that may have stemmed from the sound check issue noted above; in particular, the vocalists were often submerged and at points the high frequencies of the xylophones pierced aggressively through the texture. (Nevertheless, high soprano Sara Hagenbuch deserves recognition for her stamina and precision throughout.) Despite these occasional issues, SFCMP and their conservatory cohorts were able to deliver the essential delight of the piece to a hungry audience. One of the joys about experiencing Music for 18 live is being able to observe visually all of the organism’s components interacting, intertwining, handing things off to each other, shifting gears as a unit when a new entity steps into the aural picture. The most memorable moment of the evening came in the transition to Section VI, when Winant, who had been sitting to the side for some sections of the first 25 minutes of the work, stepped to center stage, raised a large set of yellow maracas, and suddenly unleashed a dance party. That was the point when I put the pen and notebook down, and started riding the waves.