Sea of Nostalgia: Wading Into the Music of Angélica Negrón

These days, Angélica Negrón has settled into a way of working that allows her to reach out in many directions without losing her center of gravity, no matter what genre umbrella she happens to be standing under. “In the end, the music that I like to write is the music I want to listen to,” she says. “And it’s something that you can’t control and you can’t escape.” 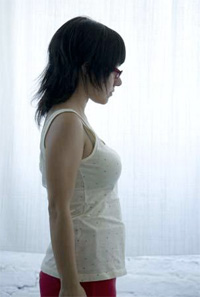 “Though now it sounds a bit absurd, I didn’t even know you could write new music,” admits composer Angélica Negrón. Born in San Juan, Puerto Rico, in 1981, she grew up studying a range of instruments—piano, violin, cello, harp, accordion—but even once she reached the conservatory level, music still seemed to stop chronologically at Debussy. Almost done with her bachelor’s degree in violin performance but beginning to write music for a band she was in, a friend encouraged her to try her hand at formal composition study. It was as if a musical curtain had suddenly been pulled back for her, revealing a host of possibilities. “Immediately from that moment, everything made sense,” she says.

Still, switching degree tracks was not a decision she made lightly. In addition to putting her behind academically, she also fought the perception that she wasn’t talented enough to make it as a performer and was just looking for a way out. “It’s not necessarily [inferior],” Negrón explains, but being a composer in Puerto Rico is “definitely something that doesn’t have as much presence or credibility as you being a performer. So it was a risky move, but I knew that was what I wanted to do.”

Along the way, she kept her eyes open in addition to her ears—actually studying audiovisual communication along with composition—which has added another level of color to how she conceives music. Alfonso Fuentes, her principal teacher at the Conservatory of Music of Puerto Rico, also instilled in her a very visual approach. “He told me before even writing the first note, just do a drawing of the form,” she recalls. “He also made some kind of crazy suggestions, but it’s something that’s been very helpful to my compositional process. Instead of telling me, ‘Just write 10 or 20 variations on this theme,’ I remember he told me to do 500 graphic variations starting with a square and then trying to organically turn that into something else, and trying to think of every step as equal.

“Though at the moment I was so mad at him,” she says, laughing at the memory, “it’s something that I still remember and that I think has helped me a lot to internalize the importance of organic development and stepping aside from the sheet music and thinking of the music itself.”

Negrón has since composed a significant catalog of concert works, as well as music for film, theater, and modern dance. In 2006, she moved to New York to pursue a master’s degree in composition at New York University. The change in geography paradoxically freed her to get a bit closer to some of her Puerto Rican roots. Though she’s always been told that her music “doesn’t sound Puerto Rican,” there are aspects of her native country that she connects with through her compositions—something that distance has helped pull into focus. “Music is a good way to get a little bit near” the feeling of home, she says. “There’s physical stuff like food or neighborhoods [in New York] that do look like Puerto Rican neighborhoods, but I think through music it’s something that I feel more comfortable with because it’s my second language in a way, even before English.”

Adding another layer of complexity to Negrón’s work is her longtime involvement with two bands: Balún and Arturo en el Barco, both of which have had active performing and recording lives. She initially tried to keeps these sound worlds separate from her concert music, because she thought merging them would be frowned upon. But especially since living in the States, her various musical lives have more comfortably coexisted, and she no longer sees the need to try and keep them from influencing each other. Her concert music betrays this in the strikingly organic way it integrates electronic and acoustic sounds, skills she credits to her experience in her band projects.

These days, she’s settled into a way of working that allows her to reach out in many directions without losing her center of gravity, no matter what genre umbrella she happens to be standing under. “In the end, the music that I like to write is the music I want to listen to,” she says. “And it’s something that you can’t control and you can’t escape.”