School’s Not Out for Summer

What is the best option for a student who has received a solid and complete education, academically and musically, through their pre-college years? Is there anything that will really fit the bill, or will these young students stimulate a new approach to compositional study on the college/conservatory level?

On June 24 I attended one of the most amazing new music concerts of my personal “season.” Over the course of two hours, I heard two major works by John Adams—his well-loved Hallelujah Junction and also a brand-new arrangement, for two pianos, of Fearful Symmetries—a new work for solo piano (Dark Halls), a new work for violin and piano (Gesualdo In Love), a major new work for two pianos and percussion (Greek Dances), and a comic but well-structured performance art piece (Sonata for Prepared Piano and Unprepared Pianist). An average night in New York, you say? Hardly. The performers were all composers and the average age was fourteen. This took place at the Kaufman Music Center, where I have made my joyful home for the past ten years, where I am music director of the Special Music School (NYC’s K-12 public school for music nerds), and where I started and grew Face the Music (NYC’s new music ensemble for teens and younger kids). 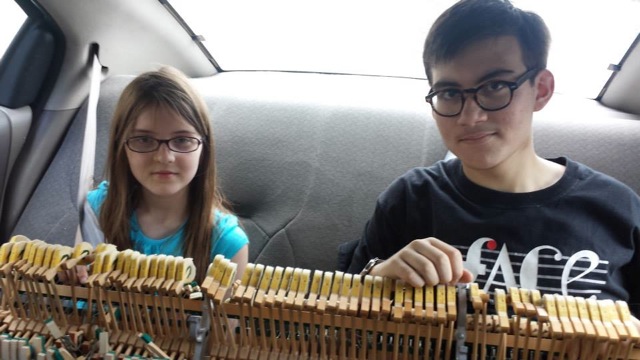 Members of Face the Music transport some piano mechanics home after a performing arts fair in Brooklyn.

For me, the delight of this concert wasn’t the obvious: well-prepared music, new voices, interesting harmonies. It was that all five of the composer/performers involved—Owen Carter, Paris Lavidis, Kyrie McIntosh, Sofia Belimova, and Zachary Detrick—had independently produced and rehearsed the concert. I felt as if I had stepped into a reincarnation of the Society for Private Musical Performances. Furthermore, it wasn’t as if these folks were starved for new music activity. Owen, Paris, and Zach are all members of Face the Music, which gave 41 concerts this year—and in fact, all of them wrote pieces for the group this season. In June alone, Zachary (who is 15) had a piece premiered (by the Special Music School High School Orchestra) as part of the New York Philharmonic Biennial, and had a different piece performed by Face the Music as part of Make Music New York; Owen (who is 14) had a repeat performance (by Face the Music) of his quirky orchestral piece Sequester as part of a concert at St Mark’s Church-in-the-Bowery; and Paris (who is 13) premiered his new theater-music piece 21 Ways to Say Grace at the Queens Museum.

And then there’s the fact that these young composers are not yet done for the summer—for some of them, indeed, the summer is a chance to finally get down to the business of writing more. I asked each of them to detail for me what they had written since school let out, and then their plans for the summer. Their answers are at the bottom of this post, but to summarize, they included the completion of violin concerti and chamber symphonies, and the creation of improvised works for piano, astronomy-inspired orchestral tone poems, and operas.

What is going on here? Is this just a bunch of amazing prodigies? Is Jenny just bragging (again)?

Sure I am bragging, a little. But to consider these young people prodigies doesn’t really do them justice. At best, the concept of a composition “prodigy” is slippery. At worst, it gives us permission to write off the broader implications of the concert anecdote I began with. Because here’s what I believe it proved: that teenagers, armed with a good musical education and an environment supportive of new music, will find it completely natural to write, rehearse, perform, and then write some more.

The reason I see it as proof has to do with the many kids I’ve seen over the past ten years come into Face the Music and find that, coupled with a good basic music education, they had all the tools necessary to start creating music in a way that I had previously assumed was the sole provenance of college students. Technology, of course, has made the idea-to-performance time much faster for young people, but this doesn’t totally explain the complete naturalness of this mini creative explosion.

It all sounds lovely, until I point out that if in fact these middle and early high school students are entering territory previously (or currently) tread only by college undergraduates, then what are they going to do in a few years when they turn 18? What is the best option for a student who has received a solid and complete education, academically and musically, through their pre-college years? Is there anything that will really fit the bill, or will these young students stimulate a new approach to compositional study on the college/conservatory level?

That will be the explicit subject of next week’s post, but in the meantime let me leave you with a sampling of my students’ responses to my question of “what are you working on this summer?” plus links to performance video from the June 24 concert.
From Owen Carter, who made the two-piano arrangement of Fearful Symmetries:

Since the end of the summer I have been writing for the FTM [Face the Music] call for scores, a piece called 82 Eridani. This is a piece that reflects the life of a G, F, or A type star. This pulls together two major interests of mine: astronomy and composition. This piece is for a middle-sized orchestra with the addition of saxophones, but a few future projects I had in mind would be smaller chamber works. Specifically, I wanted to write a piece about the western United States, because I am traveling around this summer and have been very interested in it.

Here is a screen shot of 82 Eridani: 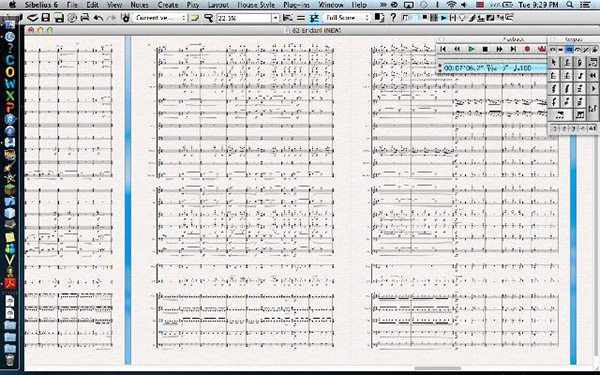 From Paris Lavidis, the composer of Greek Dances and Sonata for Prepared Piano and Unprepared Pianist:

After the completion of my Violin Concerto, written for soloist Brian Krinke, I began to revisit [my] completed works such as Chamber Concerto No.1, Chamber Symphony, and String Quartet No. 2, with the hope of revising them for performance. I also began my Violin Sonata No. 1 and a big band tune clusterfuck, and completed Symphonic Dances, an arrangement of a two-piano piece premiered recently. Also, I premiered the semi-improvised Sonata for Prepared Piano and Unprepared Pianist, as well as 21 Ways to Say Grace, a musical dialogue happening over (and making fun of) a suburban family dinner.
During the summer, I will complete Violin Sonata No. 1 and will write music to accompany a poem written for this purpose by Henry Nelson. In addition to that I will write a visually oriented dance suite for cellist Camille Dietrich, and I hope to begin my 2014 master project, a three-act randomly generated opera set in a dentist’s office, a Costco, and the Nevada desert. The opera is for two singers and an extra and tries to capture social dynamics, as opposed to the overrated aesthetics of notated music.

Here is a screen shot of the first movement of Paris’s Violin Sonata No. 1:

From Sofia Belimova, the composer of Gesualdo In Love:

Since school let out, I have been arranging and revising a piece called Train that I wrote earlier this year. I was hoping that it would be possible to offer it to Face the Music to play. My composition plans for the summer include writing a two-piano piece/concerto in case an opportunity like the one we had on June 24 comes up again.

From Zachary Detrick, the composer of Dark Halls:

Since the end of classes for the 9th grade, I have completed the first draft of Chamber Symphony No. 2. This five-movement work is a follow-up to a piece written for the Metropolis Ensemble in 2012. In addition, I am working on a piano quintet called 240 for myself and Quartet This Side Up, a string quartet that is part of Face the Music. It features John Cage quotes and extended techniques. Also, I continue work on my long-term project Alice’s Adventures in Wonderland, an opera inspired by my deep love for Lewis Carroll. I will be attending the Summer Composer’s Intensive hosted by the American Composers Orchestra and Yamaha Artist Services.

Here is a screenshot from the Alice opera: 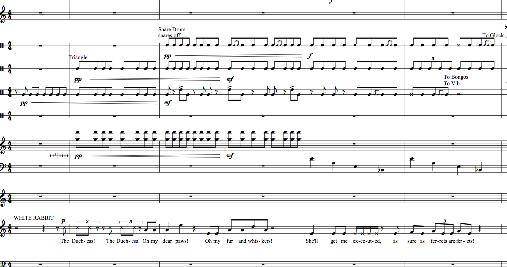 And from Kyrie McIntosh, pianist on Greek Dances and also a composer:

Being a pianist as well as a composer, I enjoy writing for and playing around with my instrument. I have always been interested in improvisatory works—an area of music I haven’t really explored in concert yet. It has been said that Liszt improvised off themes, ideas, or even objects chosen from a hat during concerts. I have been improvising ever since I could stand at the piano, and I think it would be fun to try it out in front of an audience. I think improvisation is an important way of connecting with the audience and letting them catch a glimpse of who you are. This summer I am working on including improvisation in my piano works.

*
Finally, links to the June 24 performance. The second pianist on the Adams works is Vasudevan Panicker, who during the other 167 hours of the week is Face the Music’s managing director. Thanks to Achilles Lavidis for the video:
John Adams, Hallelujah Junction
Paris Lavidis, Greek Dances
Paris Lavidis, Sonata for Prepared Piano/Unprepared Pianist
Sofia Belimova, Gesualdo in Love
Zachary Detrick, Dark Halls