As an undergraduate studying saxophone and composition, I avoided writing for my own instrument. I felt that I already knew the textural nuances, sonic transformations, and difficulties that each individual technique creates. Instead, I wanted to push myself to write for instruments that were unfamiliar to me. After gaining more experience as a composer, I felt more comfortable writing for myself as a saxophonist. Later, in graduate school, I was commissioned to write a duo for tenor sax and percussion for the 2011 SoundSCAPE New Music Festival, which I would also premier myself. This led me to discover some of the communication issues that often come between a composer and a performer: there are discrepancies between the composer’s intent and the performer’s limitations, issues regarding notational clarity, and difficulties with idiomatic and non-idiomatic writing for the instrument. Further complicating this matter was the fact that I would be both the composer and the performer, causing debate within myself as I assumed both roles and struggled with the above-mentioned dilemmas.

It was difficult to focus my enthusiasm while composing, amidst the myriad of technical possibilities, knowing I would premiere the piece. Utilizing performance techniques I was familiar with, such as slap tongue, multiphonics, and microtones, I began to weave the piece into a unique textural sound world. Because I enjoy these techniques, I pushed the limitations of both my ability and that of other saxophonists. While composing, I failed to think as a performer, creating intricate lines with a high degree of difficulty. My amusement subsided with the increasing complexity as I strung quarter-tone 32nd notes into polyrhythms between the sax and percussion. It became obvious that the piece (which I titled Solitary Confinement) would put me in a position to have to decipher my own thoughts on a level that I had never encountered before.

The process of learning to play any piece that you compose yourself is different from learning to play a piece by another composer. As a point of comparison, let us examine the process of learning a piece with many extended techniques from the point of view of a performer. Recently, I learned Gérard Grisey’s Anubis et Nout for bass saxophone (originally for contrabass clarinet). The rhythmic timbral shifts, alternate fingerings, multiphonics, and slap tongue are precisely woven together. It is evident that Grisey had highly-detailed knowledge concerning extended techniques, and his compositional style requires accuracy. With this in mind, the immediate approach to learning Anubis et Nout is one of precision in every aspect. Every rhythm and timbral shift must be exact for the full effect of the piece to come through.

Yet sometimes a composer’s artistic intent is misunderstood by the performer. Although it may be healthy for a performer to have questions about the performance practices used in the piece, it is important for the composer to notate with clarity that which he feels strongly about. This often depends on the composer’s understanding of the instrument.

This miscommunication may go the other way as well if the performer is not familiar with techniques the composer uses. As a saxophonist learning Anubis et Nout, any question I had about specific techniques, or about the attainability of any sounds or textures, were usually easy to solve. If I had difficulty with a technique, I knew that it was an issue with me as a performer, not one with the composer. However, what if the barrier between performer and composer were nonexistent; if the composer and performer were the same person? Would this create new issues in the process of learning a piece of music? How would this affect issues of communication between composer and performer?

The first time I sat down to learn Solitary Confinement as a performer, I experienced much of the same frustration as with Anubis et Nout. However, the questions of various techniques’ attainability were not as easily answered: as the composer, I found myself wondering how to change the piece to make it more feasible instead of asking myself how to attain the techniques needed. Where was the line between performer and composer? It becomes difficult to determine when a revision is desired by the composer for aesthetic reasons, or when the performer wants an edit due to technical demands.

After the first dismal practice session, I spent the next three days looking at the score—no instrument—penciling in fingerings for quarter-tones, and feeling more doomed with every additional mark. I realized I would not be able to learn what I wrote, and so I moved on to revising. Was this piece so difficult that saxophonists would not be able to learn it accurately? Or was I, as the performer, not capable of achieving the composer’s vision? Regardless, I knew I would have to simplify some of the techniques to make the piece attainable; but what was the proper balance between the composer’s and performer’s needs?

I took steps to simplify awkward passages, struggling with the dichotomy of composer and performer roles. As a performer, I quickly realized the non-repetitive quarter-tone runs were impractical. It would be unreasonable for me as the composer to expect performers to learn 3 to 4 minutes of quarter-tone runs that lack a consistent pattern. Though using the 12-tone chromatic system would have made the piece more manageable, I, as the composer, previously strove to create a less-readily comprehensible language for the listener. To compromise, I used one of the earlier phrases of quarter-tone runs as a basis for subsequent phrases, with a degree of variance. This satisfied both the composer and performer; the quarter-tones remained in the piece for aesthetic reasons, while simplifying the material for the performer.

Score Example #2: original phrase as stated, and varied as the piece progresses,
as seen in Variation I below. © 2012 Kevin Baldwin

Initially, Variation I had very few of the same pitches as the original phrase. The amount of work required to execute these passages far exceeded the artistic benefit. My struggles stemmed from identifying the source of my desire to edit the music. Despite the hardship of separating musical personae, I approached the edits with both the performer’s and composer’s dilemmas clearly in mind, thus simplifying the revision process. Still holding true to the original aesthetics of form, timbre, and phrasing, I reached a compromise between composer and performer, diminishing the inner turmoil. But once I made these initial revisions, problems arose again at the start of ensemble rehearsals. 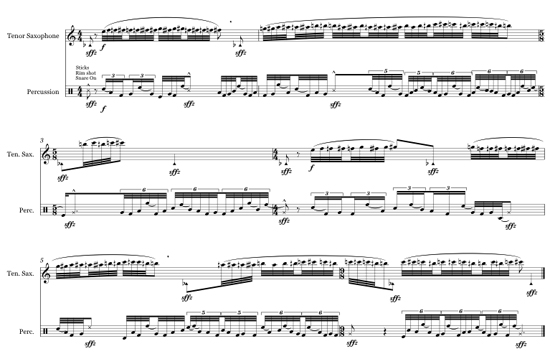 Polyrhythms between the sax and percussion created large ensemble problems that were difficult to remedy. The issue of keeping both parts together overshadowed the difficulty of playing the correct notes. Suddenly, the internal fight between performer and composer reawakened. As a performer, I finally became proficient at the quarter-tone runs, but the complexity of the interplay between saxophone and percussion consumed our attention. I refused to compromise my aesthetics in order to simplify the rhythmic intricacies seen in Score Example III because the overall chaotic textures and raucous edge was a priority. Therefore, the passage remained intact.

Problems within a piece do not only arise from the performer’s side. As a composer, I wondered if the notation and instructions in Solitary Confinement were clear enough for others to perform the piece with the same integrity and general interpretation as I intended. I knew what I wanted the piece to sound like, though I was unsure that the notation fully reflected my intention. Despite several other musicians’ reviews and approval of the score, the concern remained with me until another duo sought to perform the piece. Their interpretation fulfilled my intentions, making me feel that I had succeeded in communicating my ideas on paper well enough that they would be understood by others.

Through this experience, I set out to push my technical abilities, but in doing so I uncovered an internal struggle between composing and performing my own works. The advantages and disadvantages of the process have surfaced in other pieces written after Solitary Confinement as well. As a composer, I must adhere to my convictions and philosophies despite the level of difficulty. However, there may be times that the difficulty does not warrant the outcome, or else the techniques may not be completely possible for the performer. When the performer and composer is one in the same, these issues become more apparent, and can become more difficult to decipher the thoughts created by the two roles.

[Ed. Note: A full recording of Solitary Confinement is available at www.kbaldwinmusic.com.] 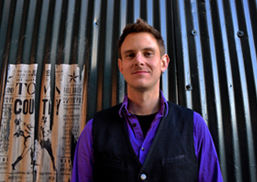 Saxophonist and composer Kevin Baldwin strives to push the boundaries of music through extended performance techniques and unique sounds. He has performed his works and those of others in the U.S., Canada, China, Italy, France. Currently, Kevin resides in New York City, and holds a MM in Contemporary Performance from the Manhattan School of Music.