In 1973, when I first enrolled in the master’s program at Cornell University, my fellow composers spoke often about Steven Stucky, who had begun his graduate work there the year before but who was then serving two years in Iceland as a member of the US Air Force. There was universal admiration for him both as a composer and a person. Hearing a piece of his – the Quartet for clarinet, violin, cello, and piano – told me that he was indeed a composer of special gifts. Already evident were the fastidiousness and elegance that would come to characterize his mature work. When he returned to Cornell, Steve and I became fast friends, jawing about virtually every conceivable subject and sometimes playing extended frisbee or softball games on the Quad.

That close friendship continued until February 14 of this year, when he suddenly passed away after a three-month battle with brain cancer. Those of us close to him knew of his struggle but expected – hoped? – Steve would be with us longer. I had last spoken to him about a week earlier, when his spirits seemed high and his fighting spirit strong. The one consolation was that he died peacefully in his sleep.

His achievements as composer and writer have been extensively chronicled elsewhere, as have the achievements of the many Stucky students who have gone on to remarkable careers in their own right. The greatest testament to him is the extraordinary outpouring of grief on the Internet upon his death. So many had deep feelings for him. He had an astounding intellect, but perhaps more important were his warmth, graciousness, and generosity of spirit. He gave unstintingly of his time to many organizations; perhaps even more important, he did the same for his friends and his students. Every young composer who had the opportunity to work with Steve carried away memories that would last a lifetime, not only in terms of the valuable instruction they received but also through the example he set as a humble and caring human being.

He was the most centered friend I have ever had. Even in the most difficult times of his life he maintained his usual friendly and calm demeanor. I don’t recall ever seeing him show anger or stress. Though his heart might be breaking, there was never self-pity nor any demonstration of emotional excess in his behavior. His family meant the world to him, and his marriage to Kristen Frey Stucky brought him enormous joy and peace over the last several years of his life, as did his ongoing close relationship with his two children, Maura and Matthew. 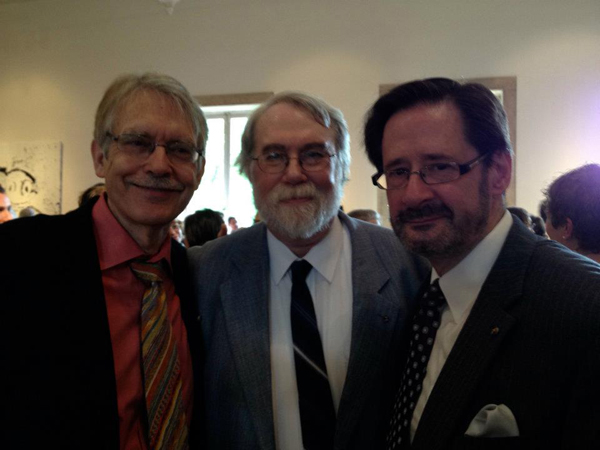 John Harbison, Christopher Rouse, and Steven Stucky at the 2012 American Academy of Arts and Letter Ceremonial