Robert Ward believed that artists weren’t always outsiders, but people who could sit at the table beside donors, industrialists, and scientists and provide a different perspective on society. 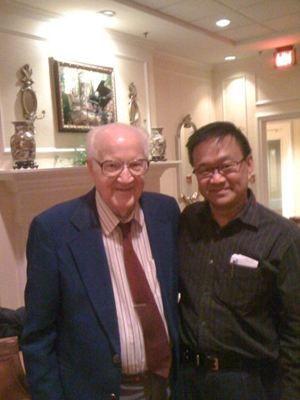 Robert Ward with Michael Ching in 2000.

I have been lucky to have had a number of great teachers and colleagues, but Robert Ward stands out first amongst them. Even back in 1977 when I first met him, his hair was mostly a distinguished white. His fatherly manner was always warm, and even when he was vehemently arguing a point, he never seemed truly angry. Bob’s inner composer was a respected and valued member of society, and so he frequently could be seen in a good suit or sport coat and bow tie. He believed that artists weren’t always outsiders, but people who deserved a place at the table beside donors, industrialists, and scientists in order to provide a different perspective on society.
Bob Ward believed in providing his student composers with opportunities to hear their works performed under the best possible circumstances. When he realized that a couple of us at Duke had finished orchestra pieces, he arranged for the North Carolina Symphony to come over and read them. When I decided to write a one-act opera for a senior thesis, he arranged for it to be produced and sung by experienced professionals. Bob was very insistent that composers be able to play and sing every note of their operas in order to remain honest to their inner ear. He also felt that by trying to play and sing a show, composers would learn what the singers have to go through to learn the notes. Back then in 1980, for me, coaching and listening to MET roster singer Michael Best try to get through my vocal lines was a priceless lesson.

Bob was really great at encouraging you to write in whatever style you wanted to. This was particularly important back in the ’70s and ’80s when music composition was in the grip of what felt like life or death battles over atonality and twelve-tone technique. Despite those prevailing stylistic winds, Ward kept to his tonal and often tuneful style. I remember a composition teacher at a summer festival describing Ward’s music as “awful.” But it was not awful! It was simply an American sound that was prevalent in the ‘30s and ‘40s, the sound of Gershwin or Gould and Bernstein. Robert Ward believed that sound still communicated with audiences, and he was going to write in that manner with all the technique and integrity he could muster. He never really deviated from that path.

After our days as teacher/student, Bob and I got to work on a couple of other projects together, including the premiere of Minutes Till Midnight at what is now called the Florida Grand Opera. That opera has a great aria in it where the main character, a nuclear scientist, asks, “Oh cosmos, with your myriad stars, afloat in the mystery of space, will your mantle of peace descend on this tormented place?” That kind of lyric about world peace inspired Bob.

Bob was something of a socialist at heart and not a fan of organized religion. He was toying with the idea of an opera about the labor leader Eugene Debs in his later years. The church certainly was not portrayed in a favorable light in his opera Abelard and Heloise. His progressive politics were mixed with old fashioned ideas about marital roles. In a fairly recent conversation with me, he said archly that now that I was a freelancer, I was lucky that my wife had a steady job. Even in his crackly older voice, you could hear the sound of friendly chiding. But indeed, I think Bob was justifiably proud of the fact that he had earned a living through his art and had been a good provider for a wife and five children. How many of us could do the same?

Bob was generous with his stories. This was much to the chagrin of his smart and undersung spouse Mary, who sometimes had the “not-this-one-again” look of someone who had heard a story about “Lennie” [Bernstein] or “Arthur” [Miller] one too many times. I do remember a tale about a harrowing night when the Japanese broke through the American lines where he was directing a band in the Aleutians, and some witty chats over dinner with his Crucible librettist Bernard Stambler.

For most of us in opera, to get a single piece into the standard operatic repertoire would be considered a lasting and major accomplishment. There are plenty of examples of that—The Merry Widow, Pagliacci, La Giaconda—to name a few. Clearly The Crucible is going to remain a cornerstone of the American opera repertoire, alongside Susanna, The Ballad of Baby Doe, and a few others. In addition to some of the most iconic characters in American opera, The Crucible has a sense of forward motion and sweep, which causes it never to be bogged down in a swamp of recitative.

Bob was very proud of the opera and posters of the Korean and German premieres (Die Hexenjagd!) used to hang on the walls of his studio. I know so many singers who have vivid memories of singing Tituba, John Procter, Abigail or Elizabeth Proctor that we could probably have a Crucible sing-along. Maybe we’ll do that sometime. The hymn in the show, “Jesus my consolation,” has taught more opera singers to sing in 7/8 than any other piece. His other operas deserve a second hearing, including Abelard and Heloise and his treatment of Edith Wharton’s Roman Fever which is a smart little chamber opera for four women.

Ward’s instrumental music is always idiomatic and well-wrought. Check out his Appalachian Ditties and Dances or his Raleigh Divertimento for wind quintet. There is a really charming young audiences piece for narrator and orchestra called Jonathan and the Gingery Snare which I remember Bob narrating with great enthusiasm. Although he had stopped writing operas, Bob continued to write instrumental music well into his nineties. 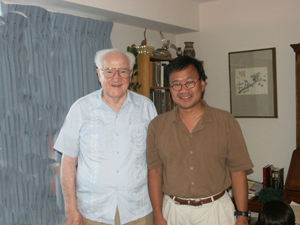 A less formal Robert Ward with Michael Ching in 2005.

Arts in the state of North Carolina is better for Bob Ward having been there. His involvement with the School of the Arts and, to a lesser extent, Duke, will be long remembered. He regularly served on national and state boards, prize committees, and music panels. In order to keep opera alive in central North Carolina, he co-founded and chaired the board of an opera company there, now absorbed into the North Carolina Opera. In this internet era where every tweet, blog, and post is an implied act of subtle self-promotion, he did the in-the-trenches work unsung, as a quiet steady duty.

In our final chat together last month, when we were making plans for me to come see him this July, I asked Bob about his relationship with the composer Douglas Moore. He said that Moore was an unusually generous colleague. That is an apt description for Bob, too.

*
Composer and conductor Michael Ching is now the chair of the Douglas Moore Fund, which provides an annual grant to an aspiring opera/music theater creator. His opera Speed Dating Tonight premieres this summer at Brevard.