On September 1, 2018, we lost a true musical giant, innovator, NEA Jazz Master, and a warrior for the elevation of African-American pride and culture. His compositions disseminating the richness and beauty of the African aesthetic are unparalleled.

Randy Weston was born during an era of extreme racism, segregation, and discrimination in the United States. His life’s mission was one of unfolding the curtain that concealed the wonderful greatness and extraordinary accomplishments inherent on the African continent.

I am super blessed and honored to have been a member of Randy’s band for 38 years. Baba Randy was a spiritual father and mentor for myself, and so many people. Our last public performances were in Rome and Nice in July, with Billy Harper on tenor sax, Alex Blake on bass, Neil Clarke on percussion, and myself on alto saxophone and flute.

I will always remember Weston’s extreme kindness and generosity. My first four impressions of him revealed who he was and what he cherished:

The first time I ever heard Randy Weston perform live was at The East in Bed-Stuyvesant, Brooklyn, in the early 1970s. His band was a duo with his son Azzedin on African percussion. The communication and symmetry of father and son were beyond belief. This was a clear demonstration of his love for and mentorship of his children. I also remember Randy inviting the great James Spaulding to sit in on flute.

In the late 1970s, I performed with the legendary South African pianist Abdullah Ibrahim at Ornette Coleman’s Artist House Loft in Soho, New York City. Randy attended this show with his father Frank Edward Weston and his manager Colette. I witnessed first-hand his profound love, respect, and reverence for the elders and his admiration for other musicians especially from the continent of Africa.

Also in the late 1970s, I had my first opportunity to perform with Randy. It was at a fundraiser in support of the South West African People’s Organization, which fought against apartheid in South Africa. This was yet another demonstration of his commitment to the struggle for civil and human rights worldwide.

Then during the summer of 1980, I was overjoyed by having my first hired performance with Randy and his African Rhythms group at the House Of The Lord Church in Brooklyn, which again displayed his support and commitment to keep jazz alive in the black community and his in-depth love for the African-American church.

Much more recently, when my mom Lois Marie Rhynie passed in 2014, there was a last-minute issue with the church piano. Weston paid for the rental of a beautiful baby grand and performed gratis.

My last visit to Randy’s place in Brooklyn was on August 18, 2018. He was so happy and energetic. Coincidentally when I walked in the room he was listening to a CD of his solo improvisatory piano incursions of the highest level. With each note and phrase, both of us were in a profound state of excitement. I asked, “Hey Chief, where’s this from?” He candidly replied, “The Spirits of Our Ancestors.” 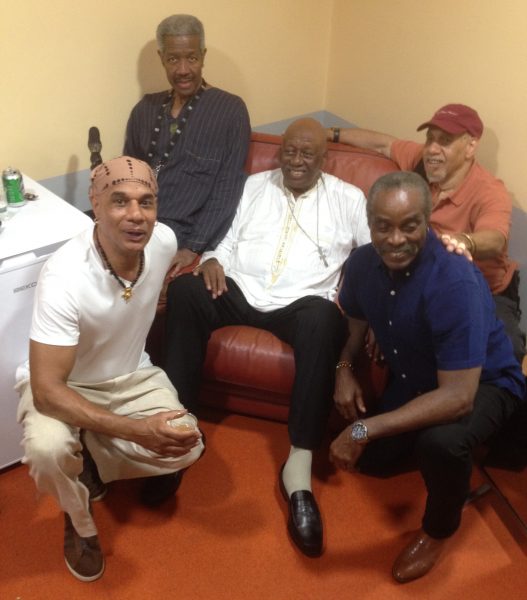 May 20, 1991 marked the first day recording sessions for The Spirit of Our Ancestors, a landmark recording by Randy Weston and African Rhythms at the world-famous BMG studios in New York City.  When I arrived at the building lobby, the elevator door opened and standing inside was Dizzy Gillespie with his longtime close friend and associate Jacques Muyal, who was living in Switzerland. On my first trip to Tangiers in 1985, I visited Jacques’s home and met his mother and brother. Mr. Muyal is an extraordinary gentleman and jazz producer with a deep love of our music.

I was quite overwhelmed knowing I would be on the same recording as the great Dizzy Gillespie, responsible for the major evolution in jazz history called bebop. We hit it off right away and Maestro Gillespie greeted me with a warm smile and hug. Once we started the session I handed Dizzy a Bb trumpet lead sheet for “African Sunrise.” He stated his preference for a concert lead sheet. After his perusal of the music he noticed an E minor7(b5) to A7(b9) resolving to D minor7. Dizzy then went to the piano and said, “Look at the E minor7(b5) as a G minor6 with the 6th in the bass.” Then he proceeded to play the most gorgeous chord progression. He was a pure musical genius! When he later did the first and only take of “African Sunrise,” Dizzy never looked at the music.

Soon to arrive in the studio were the leader Randy Weston and his longtime arranger and trombonist Melba Liston. Melba had recently endured a stroke and was confined to a wheel chair. However she taught herself how to compose and arrange on the computer using her left hand only. (Her right hand was incapacitated due to the stroke.) Preceding this recording Randy and I were performing in Los Angeles and we would frequently check on Melba to see how she was doing health wise and how the arrangements were unfolding.

Shortly after their arrival an A list of jazz practitioners blessed the room with their astonishing presence: First Idrees Sulieman, the great trumpet player and who also could burn on alto sax. Next was Benny Powell and we had become really close since our joint performances and tours for African Rhythms dating back to 1985. (I was also featured on his album Why Don’t You Say Yes, Sometimes? which was recorded around the same time as Spirits of Our Ancestors.)

There were three tenor sax legends. Billy Harper—I first heard Billy with his band at Joe Lee Wilson’s jazz loft The Ladies Fort Festival in the mid-1970s.  He was on fire and I also heard him later with Max Roach. Dewey Redman—Dewey often spoke very highly about a young upcoming tenor titan that was not yet very well known, but soon to be the unconquerable master tenor sax player Joshua Redman, who also happened to be his son. It was my first time to play with Dewey and he was also featured with Randy’s band for a concert at Lincoln Center not too long before he passed away. He was a gentle man and a giant on the tenor sax! Up next was Pharoah Sanders—I was a huge fan of Mr. Sanders since my high school days in Long Island. During my senior year the early 1970s “The Creator Has A Master Plan” was our anthem. It was quite awe-inspiring to have an opportunity to record with a master and spiritual beacon of improvisation.

On bass, Alex Blake—Alex and I are best friends and his artistry on the bass is quite breathtaking. This was our first recording together, but I had first heard him in duo with Randy at the Village Vanguard in the mid-1970s. Also on bass, Jamil Nasser—Maestro Jamil and Randy were extremely tight. Randy credited Jamil with introducing him to four great pianists: Oscar Dennard, Lucky Roberts, Phineas Newborn, and Ahmad Jamal. (I was blessed to be a member of Benny Powell’s Quintet since the late 1980s and Jamil was one of the bassists. His knowledge was vast and deeply spiritual.)

Idris Muhammad played the drums. It was my first opportunity to perform with Idris. Wow, he always displayed an in-depth sensibility for the second-line New Orleans aesthetic and kept everything modern with melodic underpinnings. Randy loved Idris dearly and they had previously recorded together for Verve Records. Arriving next was Big Black, an outstanding percussionist.  Words are inadequate to describe his dexterous rhythmic interplay and soulful drive on the hand drums rooted in the Mississippi delta blues, jazz, and the traditions of Africa and its diaspora. (I was so overjoyed to perform many concerts with Big Black since then; his sense of time and swing was quite astounding!)

Randy’s son Azzedin Weston also played percussion and his rhythmic pulsating groove remained ever present. He was a natural genius who also spoke several languages fluently and his artwork could rival Picasso’s!!! (We were like brothers and I was very sad at his passing.)

Finally, there was Yassir Chadly on genbri and karkaba. Yassir was part of the Gnawa musical tradition from Morocco and he resided on the west coast. Randy’s original plan was to have six Gnawa musicians from Morocco but they were not allowed visas at the last minute. Yassir did a wonderful job as their replacement.

I will always remember Randy’s extreme happiness to have so many heavyweights in the same room. Randy treated all of the musicians as family and our respect for the Chief was quite evident. There was so much history between Randy and Melba, Melba and Dizzy, Idres Sulieman and Jamil Nasser, Big Black and Randy—they already had tremendous musical collaborations during one of the most fruitful and fertile period of jazz’s evolution. But there was an unbelievable bond established among all participants. The first 2 and 1/2 hours of very expensive studio time was dedicated solely to warm greetings, hugs, handshakes, more hugs, more handshakes, etc.

Finally the producer asked me to help him coral the troops so we could start recording.  It was physically difficult for Melba to direct, so I was called to the task. I also had to solo after Dizzy on “African Sunrise,” which was a daunting endeavor. Melba wrote some immensely memorable arrangements capturing the spirit of our ancestors. Please check out the three tenor saxophones in battle on “The African Cookbook”!!!

Subsequently I went on to record the following projects with Dr. Weston: Volcano Blues, Saga, Khepera, and Spirit, The Power of Music. And on his last two ensemble recordings—The Storyteller and The African Nubian Suite—my duties included being an associate producer. I was truly fortunate to spend 38 years performing, recording, and touring the world with Randy Weston, a true African Griot.

Randy Weston is the last pianistic link between Duke Ellington and Thelonious Monk. His forays into improvisation are clearly a manifestation of the highest tier regarding a creative genius with astounding originality. His compositions are in the pantheon of renowned jazz standards.

Words are inadequate to express my love, admiration, appreciation, and gratitude for such an incredible human being. May his spirit rest in paradise for eternity. We will miss you Baba Randy!!!