James Horner was a true gentleman, a smart businessman, an excellent teacher, a sensitive artist with a big heart, and a composer who loved the art of collaboration—despite not always getting his way.

The news of composer James Horner’s death hit me surprisingly hard. I choked up trying to convey the news to a friend. Why the strong response, Roger? You barely knew him.

“Jamie”—the nickname everyone at UCLA knew him by and which later he came to loathe—finished his master’s degree in composition at UCLA. He started his Ph.D. work, but abandoned it when he started scoring his first Roger Corman film while simultaneously trying to be a teaching assistant.

Over the years, I continually heard stories about Jamie/James Horner from some mutual friends, from his fellow students, his former teachers, and from friends who played his film scores in Hollywood. But I only met him for the first time in 2010 while serving as chair for the UCLA music department. We had several one-on-one meetings, and he generously agreed to give a master class for our composers. Over that time I developed a great affection and respect for him. 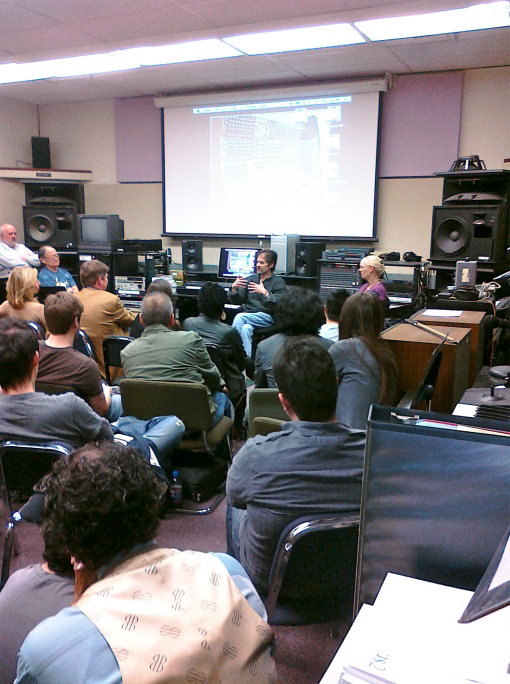 James Horner during his masterclass at UCLA. Photo © 2010 Roger Bourland

In our meetings we talked for hours about concert music, film music, role models, his UCLA teachers and classmates, about Hollywood, and our favorite composers. As we were putting together a curriculum to train young composers for a career in Hollywood, I picked his mind about how we might go about that. He acknowledged that young composers go to school fantasizing about a career such as his, but lamented that the market for composers of his kind (i.e. writing film scores that call for large orchestral forces) is evaporating. “I am a dying breed. Few composers will ever have the opportunity of doing what I have had the privilege of doing as my career.”

He talked about the challenges of working on James Cameron’s Avatar: “Cameron held onto tight control of every aspect of the entire sonic palette. He was clear that he did NOT want any themes or melodies. ‘A tuneless score.’” As challenging as it was, Horner realized his role in the process, and that it was Cameron’s vision, money, and film. It was his job to rewrite until he got it right—and this was the award-winning composer of Titanic, also a Cameron-Horner collaboration.

For the score of Avatar, Horner collaborated with ethnomusicologist Dr. Wanda Bryant to assemble a musico-sonic palette of unique world music instruments. After auditioning hundreds of timbres, he culled them down to a palette of twenty-five and presented it to James Cameron, who then rejected all but five, all of which are heard in the soundtrack today.

As his two-hour masterclass went on, this composer who had been described as quiet, shy, and private, became more forceful. He clearly enjoyed talking and teaching these young and eager students. Many of them stayed afterwards to have their picture taken with him. He graciously stayed late to pose and speak with them. 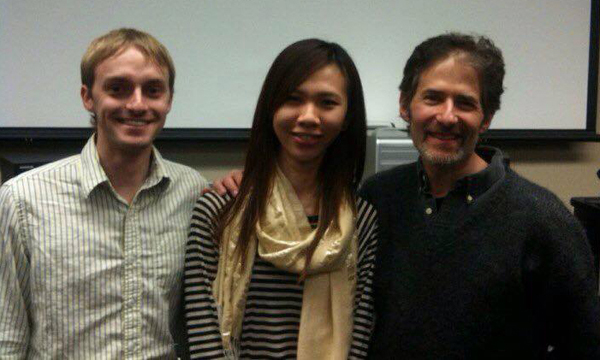 I asked him who his favorite film composer was: “I have tremendous respect for John Williams. He is in a class by himself.” We then gushed over Williams’s output and evolution as a composer, citing case after case of terrific compositional cleverness and invention.

Professor and soprano Juliana Gondek, a classmate of his at USC, asked him whether he would ever write an opera. “No, but I would love to write a ballet.”

I asked him: “Talk to us about crying and music. We don’t teach it at the university.” (The class laughed.)

“I could never make people cry in my concert music. In my music for film, I can,” he said. “I loved having the opportunity [in Titanic] to help the audience fall in love with two characters; and knowing that they will both die offered me a unique musical challenge.”

I found James to be a true gentleman, a smart businessman, an excellent teacher, a sensitive artist with a big heart, and a composer who loved the art of collaboration—despite not always getting his way.

In our final private meeting, I told him something I knew would be important for him to hear. When the composition area at UCLA interviews prospective undergraduate students in composition, one of the questions we often ask them is, “Who are your favorite composers?” Expecting to hear Stravinsky, Schoenberg, or John Adams, to our amazement year after year the majority of applicants put James Horner at the top of that list.

I saw a gracious, generous, sensitive but outgoing and humble man.

As a composer, he was “one of us” and we have lost one of our brothers as well as a bright light. James, we will miss you. You have touched the world and left it a better place.