I’m curious about composers recycling their work. As useful as repurposing material can be for stimulating ideas, has it become in some instances a shortcut by which we avoid the hard work of creating truly new material “out of thin air”? 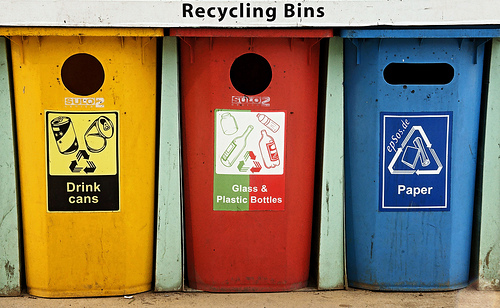 “Colorful Recycling Containers for Trash” by epSos.de on Flickr

I’m curious about composers recycling their work. The act of recycling can take different forms; for instance, a composition can be arranged for different instrumental forces, which is a very clear and direct form of recycling. Musical material such as chord progressions and melodic lines can be taken from one piece and transferred to another, or a formal structure can be recreated within a different context.

Recycling happens all the time, in all different art forms, and I find it a perfectly acceptable creative method. Many would say that at this point in time any music brought into existence is the result of recycling, because “it’s all been done before.” When I’m composing, I often save music that doesn’t make it into the final version of the piece I’m working on, and later go back and sort through the discard pile in case something can be mined for a new work. What usually ends up happening is that any old material I decide to try out winds up so transformed that it barely resembles its beginning form. In that context, recycling can be really handy, serving as a stepping stone to new ideas.

But I wonder, as useful as repurposing material can be for stimulating ideas, has it become in some instances a shortcut by which we avoid the hard work of creating truly new material “out of thin air”? Hearing the music of composers who have been writing striking and original work in very personal voices rather suddenly begin replicating their own musical “habits” in fairly overt ways raises an eyebrow; what’s going on there? Hearing a prominent melody from one piece recur in another is by no means an automatically negative thing—goodness knows, the music of Philip Glass, for instance, is very specific, and his techniques recur frequently. In general, my questions are about the impetus behind the action. Is it simply that the composer really loves that melody and is jonesing to hear it more? Or is s/he so buried under a load of commissions and deadlines that recycling has become a method by which to produce work more quickly? Again, there’s not a right or wrong here. I’ve heard a number of musicians and friends recently share their experiences of how much the increasing speed of life—both in a general, and in a personal sense—can affect creative decisions, and that they have felt the need to take steps to slow down a bit and take stock of all the swirling activity around them. Although the recycling of physical materials is something I embrace wholeheartedly, can music creation be viewed in the same light?