Plugging into Grass Roots at Green House
NewMusicBox
Written By

Big rooms, slick clothes, and pricey intermission drink prices have their place, but I thought I should get out to shows organized by smaller, less tightly knit groups, where the filters are off and the experimentation is on. I also thought that I’d seen lots of fiddles and horns, so it might be worth finding a show where there’s more plugged in than the announcer’s microphone.

I’ve covered a number of events over the last few months put on or sponsored by large arts organizations in and around Austin. These groups tend to have significant financial backing, (in “arts dollar” terms, that is) are typically frequented by a particular crowd, and have their own ebb and flow. Big rooms, slick clothes, and pricey intermission drink prices have their place, but I thought I should get out to shows organized by smaller, less tightly knit groups, where the filters are off and the experimentation is on. I also thought that I’d seen lots of fiddles and horns, so it might be worth finding a show where there’s more plugged in than the announcer’s microphone. 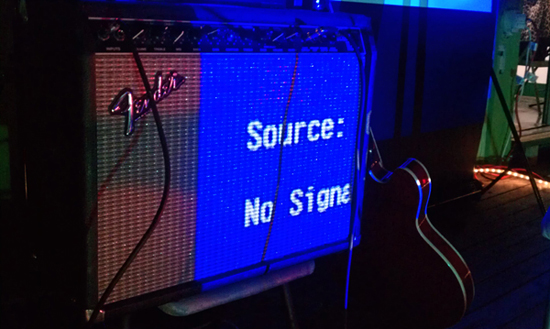 I took a drive north through the downtown streets and a few shucks and jives later found myself at the Green House, a funky little boutique that happens to have a tremendous backyard and a stage. As I walked through the shop and out into the backyard, I found myself in an environment that felt decidedly “Austin” to me. Complete with makeshift bar, mismatched chairs, and a few industrial thimbles for tables[1], the vibe could not have been more spot-on. A cadre of the tattooed and pierced mingled with folks from the neighborhood as Eli Good ran tests for his first set and, after a few squeaks and squawks, we were underway. Set up on a small table topped with the ubiquitous Macbook Pro, Good’s syncopated beats mixed with a stuttered bass groove that was one part club, one part jet engine from a distance. The jet bass was slowly granulated[2], becoming less and less defined as a second voice burst like wind chimes through the texture. It was tough to tell if these chimes were re-purposed from the granulated bass or a completely separate instrument, but the contrast between the initial signal and the chimes was striking. The chimes swirled around briefly before getting sucked back into the jet-engine mix, which as it drew to a close, was considerably closer and threatening to land right on top of us. The second piece began similarly with the manipulation of a simple texture which slowly developed into a large, dense mass, giving the impression of a huge, chugging Motown bass mixed with a church organ. Good controlled dynamics, loops, a variety of envelopes, and other parameters in real-time as the ghosts of James Jamerson and Earl Van Dyke traded fours. 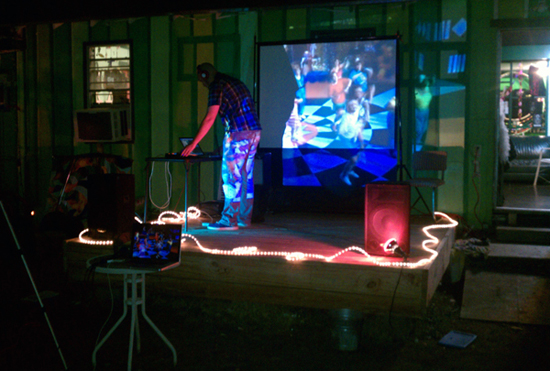 Eli Good
Electronic music sometimes suffers for lack of a visual component (or maybe I should say that other music benefits from the visual component) but behind the stage, a screen was set up that ran a variety of images, from the early ’80s video game Dig Dug[3] to random YouTube videos. This imagery continued as Christopher Petkus began preparing for his set. Watching Petkus set up to perform is like watching Schwarzenegger load in for the third act in any of his ’80s film work. An abbreviated equipment list includes delay pedals, an ebow, midi controller, computer, and amps, all topped off by a cherry red Gibson 335. His first tune started with an ostinato that sounded like a ten-ton bass cricket chirping in an outsized forest and continued mini-passacaglia-like throughout the entire piece. The cricket morphed (see the Neo scream footnote below and imagine it taking ten minutes) into something that sounded like a submarine; slow, distant, and a million miles under water[4]. A fading, detuned organ sample popped its head above the bass, shimmering and distorted. This distortion slowly spread to the ostinato, amplifying frequencies that I could feel in my teeth and which tested the limits of the sound system. Petkus upped the acoustic/electric ante with guitar in his second piece. It started in similar fashion to the first, with a low pulsing bass that here sounded less underwater and more outer space, and over the course of the piece outlined a slowly deteriorating rondo. Whistling, screeching harmonies reminiscent of a Branca symphony coursed over the top of the bass texture (though interestingly the guitar part had not yet started), and when Petkus finally put ebow to string it was as though the aliens had landed, and when they said, “Take me to your leader,” Robert Fripp showed up. The distorted but draconically controlled tone of the guitar gave way to feedback and then the whole thing came to an end when the bass was abruptly shut off. We in our lawn chairs applauded then shuffled off into the night. 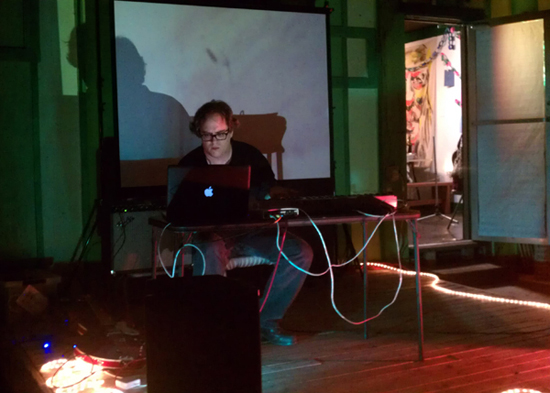 Christopher Petkus
This was a small show. I haven’t covered any shows with fewer than one hundred people in the audience (there are usually a few hundred), and it was compelling to watch the interaction between the performers and this smaller crowd before, during, and after the show. Try as they might, the larger organizations will probably always have a harder time making that personal connection in the way that a performer playing in front of a few dozen people can. I suppose you could show up at an orchestral after-party and chat up one of the cellists, but it’s not quite the same as talking to an artist five minutes after his set in the quiet and relaxed environment of a boutique’s backyard. The personal feedback loops that occur during these intimate shows go a long way towards humanizing the performances and performers and help facilitate the connections between artist and audience. I’m going to put a few more on my list for the near future.

1. And at least one guy whose skateboarding skills were about as strong as his ability to chat up the girl at the bar. Who skateboards on grass?

2. For a super-detailed definition of granulation (including granular synthesis) go here, but basically it’s visually comparable to pixilation. Also, you can check out this example of Neo screaming from the Matrix. It starts fairly clean and becomes less focused and more granulated through the scream.

3. This actually was a bit distracting for yours truly. When my sister had surgery as a kid, the hospital had a few video games that you could play for free. I played a lot of Dig Dug.

4. It was around this point that captain skateboard tried to sync his ollies with the pulse of the submarine, with varying degrees of success.