In the chilly night air of December 2011, Occupy Wall Street protesters gathered outside on Lincoln Center Plaza. Inside the nearby Metropolitan Opera House, the third act of Philip Glass’s Satyagraha drew to a close as the character of Mahatma Gandhi proclaimed: “When righteousness withers away and evil rules the land, we come into being, age after age…for the protection of good, thrusting back evil and setting virtue on her seat again.” Shortly thereafter, Glass led the Occupy demonstrators in a recitation of these same words. Driving home the link between OWS and the opera, a man exhorted departing patrons to cross the police barricades and join the crowd of activists. “What would Gandhi do?” he bellowed. “It’s a real life play! The opera is your life! Your life is the opera Satyagraha!”

“What would Gandhi do?” Although rhetorical in nature, the question nevertheless hints at an ethos that animates both Satyagraha and the OWS movement: community.

The cultivation of community is fundamental to new music, as other essays in this series demonstrate. Community as an ideal takes various forms, from Bang on a Can’s conscious programming of antithetical musical styles to implicit critiques of traditional musical authorship in collectives such as Pulsa and the Theater of Eternal Music. In these, community finds expression through social practice. But how does this communal ethos actually translate into music (as one audience member asked at the recent New Music Gathering)? In Satyagraha, this value is encoded both musically and dramatically. Moreover, community informs not only the relations between artistic collaborators, but also extends to the audience.

Writing for an NEA review of American opera in 1988, Glass dismissed what he called “simple authorship,” which might be understood with reference to the fact that operas are almost always identified simply by their composer: Bizet’s Carmen, Wagner’s Tristan und Isolde, Glass’s Satyagraha. (In reality, the authorship of most operas is more complicated.) Referencing the 1980s influx of experimental artists into the opera world—a transformation brought out in part by a network of risk-taking impresarios and philanthropic institutions—Glass championed a complex model of authorship:

One of the big differences between the Italian tradition of repertory opera and the contemporary tradition—mostly people younger than myself and myself—is that this tends to be group work. You can use the word collaboration…

That’s simply the way we work. I come from a tradition of group theater work…This is the contemporary tradition of theater, which has only just begun to be practiced in the world of opera.

…We’re looking at a real revolution—a revolution in methods of working, collaborative ways of working, ways pieces are produced and ways they ask the audience to perceive them.[1]

Glass’s first commissioned opera, Satyagraha, was the product of this collaborative ideal.

Less than a month after Einstein on the Beach appeared at the Metropolitan Opera in November 1976, Glass had partnered with writer and artist Constance DeJong, a friend from SoHo, for his new project. Within a year or so, Robert Israel—another SoHo acquaintance who happened to be serving a three-year residency at the commissioning institution, the Netherlands Opera—joined Glass and DeJong. Although Glass had the initial idea for the opera’s subject, together these three developed the primary components of the opera—music, text, image. (Movement would come at a later stage via director David Pountney.)

Borrowing a strategy from various mid-century avant-garde theater collectives, Glass, DeJong, and Israel decided that image and movement should carry the weight of the non-linear, episodic narrative of Gandhi’s South African years. In a move that shifted authority away from traditional operatic narrative devices of words and music, DeJong constructed the Sanskrit libretto using excerpts from the Bhagavad-Gita, while Glass composed in a newly developed post-minimalist style that resists narrative and representation.[2] In de-familiarizing text and music, the collaborators worked to destabilize conventional operatic notions of authorship. Under this aesthetic, no single element dominates the theatrical discourse, rendering meaning ambivalent.

This, according to Glass’s understanding of Cage’s maxim, leaves room for the audience to “complete” the work. By bringing together the parallel layers of music, image, movement, and text in their subjective (yet communal) experiences of Satyagraha, spectators join in the process of authorship. They derive their own meanings at different points of the opera, and in doing so become part of a larger community.

Satyagraha expresses community through its internal features as well. Both music and dramaturgy foreground the collective human element necessary for the realization of Gandhi’s non-violent civil disobedience. Although the opera is nominally about Gandhi, the focus lies more on the communities he fostered. This shift in emphasis took shape over the course of multiple drafts of the plot—one of the earliest of which consisted of twelve chronological scenes. In a 2014 interview, DeJong recalled this development:

At some point, everything crystallized and changed when the interest became not on biography but on the genesis of non-violent civil disobedience…now, not only was the subject vaguely interesting, it was superbly interesting and relevant, and it was about an idea and not a person. And that really mattered to me. Then, soon, the opera really became about the continuity of an idea… 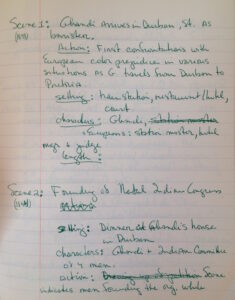 The first page of Constance DeJong’s second outline of Satyagraha.

Musically, this communal ethos meant that the solo vocal virtuosity typical of much opera was discarded in favor of small ensemble and large choral numbers. The chorus shoulders four out of the seven scenes, leading Glass to characterize Satyagraha as “practically a choral opera.” DeJong stresses the importance of the chorus in starker terms:

If you have a political movement, you have to have people. A real central character to Satyagraha is the chorus. They’re not there supporting the soloists, which is a very unusual feature of an opera. They have those big scenes, the most dramatic scenes, actually, in the first and second act. They function as a character. The dimension that brings to the opera musically is huge.

Dramaturgically, DeJong, Glass, and Israel focus attention on episodes from Gandhi’s South African sojourn that demonstrate the power of community. The opera’s second scene, for instance, reenacts the formation of Tolstoy Farm in 1910, a co-operative commonwealth that served as the headquarters of Gandhi’s South African campaign.

In an overt testament to their own experiences of communal action, the collaborators chose to have Martin Luther King, Jr. serve as a historical “witness” to the culminating final scene, which represents Gandhi’s 1913 Newcastle March. In a 2014 interview, Israel reflected that the decision to link Gandhi with MLK “couldn’t have happened without young people having been involved in Civil Rights, in concern about the war.” Israel’s wife was one such young person, having served as an activist in 1960s Alabama.

As if to emphasize the importance of collective action, Glass positioned the chorus at the musical center of the final act. Moreover, what is implicit in Gandhi’s closing lines—the reference to reincarnation—becomes explicit in the opera’s staging, as time and space bleed together. In the premiere production, over the course of the final scene Alabama state troopers removed members of Gandhi’s satyagraha army—i.e., the chorus—from the stage, until Gandhi and King were left alone. In the closing moments of the opera, the satyagraha army appeared in the starry night sky behind King, thus visually transferring the idea of non-violent civil disobedience across time and space from turn-of-the-century South Africa to the United States at mid-century. 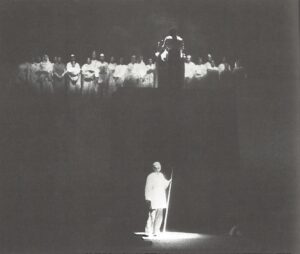 The music of Satyagraha participates in this transfer as well, albeit in a less concrete way. In the opening and throughout most of the Act III, Glass employs a chaconne that slides between two harmonic poles: F minor to E major. 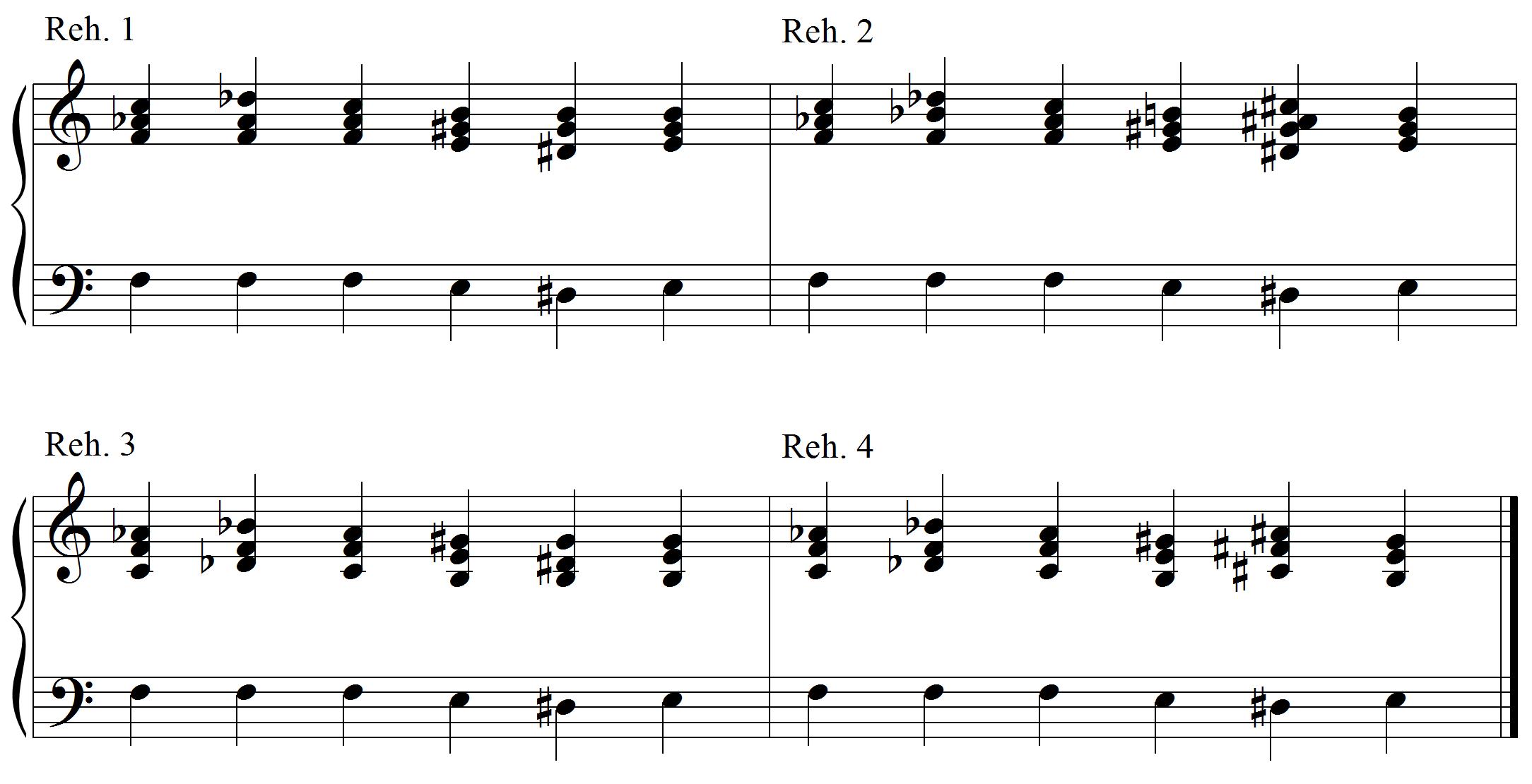 In the final section of the act, however, this relationship between F and E undergoes a transformation which, when heard in the context of the third act mise-en-scène, suggests the transfer of Gandhi’s ideals and legacy to King. Once Gandhi and King remain alone onstage, a harmonic transformation crystallizes beneath Gandhi’s repetitions of a rising Phrygian scale on E. The F minor of the opening chaconne evolves into F major; E major becomes an implied E minor. Only in the concluding two measures does the ambiguity of the E minor clarify into C major—virtue is set on her seat again, the arc of the moral universe does indeed bend toward justice.

When Julian Crouch and Phelim McDermott reimagined the opera for the ENO–Met co-production in 2007–08 (revised in 2011–12), the emphasis on collective action took on a modified form that later resonated with the Occupy movement. In this rendering, members of the Improbable Theatre Company share the symbolic mantle of satyagraha with the chorus. Garbed in the muted, earthy costumes of a lower socio-economic caste, the so-called Skills Ensemble stands in deliberate contrast to the perceived opulence of the operatic genre. Throughout they remain a continuous but silent presence, creating and manipulating huge puppets, changing the sets, and assuming the roles of Tolstoy, Tagore, and King. Crouch’s reasoning was straightforward: “We wanted to create transformations using people rather than big stage machinery.”

The symbolic role of the Skills Ensemble is most apparent in the closing act, where the temporal blending of the 1913 Newcastle March and the Civil Rights movement extends into the present, as police in contemporary riot gear descend on Gandhi’s comrades. At the opera’s conclusion, the stagehands alone remain on stage with Gandhi and King. This reimagining of the voiceless, lower-caste stagehands—the embodied means of production, the 99%—as the embodiment of satyagraha offers a poignant reflection of pressing 21st-century concerns over rising inequality and political disenfranchisement.

“What would Gandhi do?” Foster community, because ideas ultimately rely on people, much as new music depends on a vibrant network of committed performers, composers, presenters, collaborators, and audiences. In Satyagraha, this communal ethos emerges musically, dramaturgically, and in the acts of creation and audience reception. “Gandhi’s leadership,” Crouch pointed out, “was obviously massively important, but what he achieved was done through people power.” 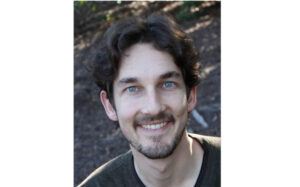 Ryan Ebright is an instructor in musicology at Bowling Green State University. His research focuses on music for the voice, stage, and screen, with an emphasis on 20th- & 21st-century opera, minimalism, and 19th-century Lieder. His current book project, Making American Opera for the Modern Age, centers on opera in the U.S. after Einstein on the Beach.