Pavillons en l’air—Bell’s Up on the NYPhil Biennial

For the inaugural NY Phil Biennial, a large initiative devoted to the newest of the new, the Philharmonic borrowed a concept that is generally associated with the visual arts: the exhibition.

For the inaugural NY Phil Biennial, a large initiative devoted to the newest of the new, the Philharmonic borrowed a concept that is generally associated with the visual arts: the exhibition.  When I first learned of it, at last year’s season announcement press conference along with everyone else, what resonated was the idea of the biennial, the every-two-years event that could efficiently attract a specific gravity of attention to itself and the work presented.  But as I’ve seen and heard since Thursday evening, the curators of the NY Phil Biennial have taken the concept of the exhibition into the concert hall on a more structural level.  Taking from Venice (the original contemporary art exhibition as we know it, which goes back to 1895) the organizing principal of the pavilion—a separate space with its own curator, purpose, and point of view—and applying that to this collection of events, the Philharmonic seems to have made something both looser and freer than I was probably expecting.  I tend to think of a festival as being an opportunity to focus on one or two things in particular (the 2008 Tanglewood Contemporary Music Festival, devoted entirely to Carter at 100, comes quickly to mind), but in practice, and in New York City on a spring weekend, who’s to say that variety isn’t the spice of life?  The pavilions were helpful to keep in mind as I dashed across town over the last several days; from Pig Tales to Ravens to Pennsylvania miners, and from central Europe, France, the UK, and Japan, to America and back again. 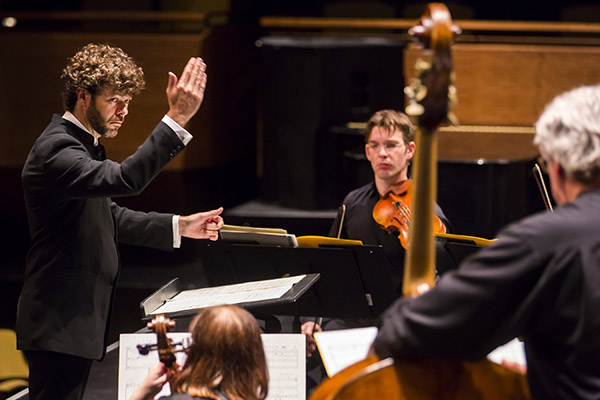 The pavilions concept can be terribly convincing when each curator and each artist is working within their wheelhouse.  Whether or not the chicken-and-egg question of “which came first: the repertoire or the artist?” is interesting, the result looks deliberate: New Yorkers doing what they do best.  Who better than Doug Fitch and Edouard Getaz to stage HK Gruber’s joyful, zany, and satiric cabaret opera Gloria – A Pig Tale?  (with nods to Animal Farm, Kurt Weill, and others who mastered the fine art of allegory). Who better than Pablo Heras-Casado, the music director of the Orchestra of St. Luke’s and perhaps the world’s most charismatic young disciple of Pierre Boulez, to perform the music of the elder’s close circle with the former’s local band?  Bang on a Can performing Julia Wolfe; Matthias Pintscher (now living in NYC for years) conducting very recent works from Europe’s master set: these feel like obvious choices.  To me, for good reason: if this is an exhibition, why not give every piece and every note the golden, experienced care and treatment they each deserve?  Performances have been truly stellar and, in some cases, illuminating and transcendent.  This is proving to be no marathon, where participants and spectators alike must drag themselves across a finish line to the earthly comforts of burgers and booze, only to say, “I was there for it all.”  Each pavilion is an event worth seeing, and after seeing seven in the last four days, I still would recommend each one (with more detail in my next posts). 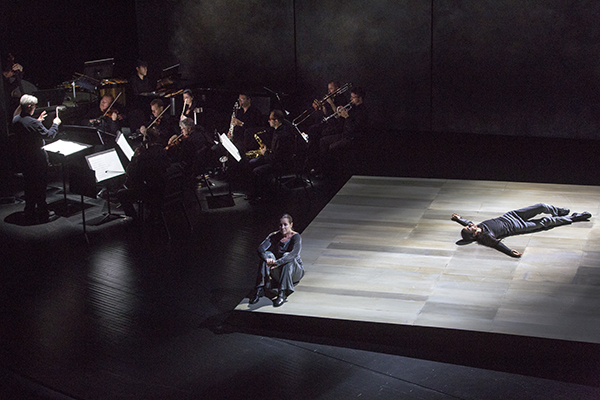 My friends know me as being a pretty ambivalent New Yorker (I long for the mountains and sun and the possibility of running with a dog off-leash), but a real surprise of the biennial so far was to be reminded of the cultural capital and the sheer vastness of musical resource in this city.  What a clichéd revelation to arrive at!  But concertgoers come to start asking ourselves, especially in busy months: “Am I going to this or that performance tonight?”  A designed festival schedule that allows for the possibility of going to see this and then that performance has a way of putting the variety within reach.  Saturday was my first trip to the Gerald W. Lynch Theater (all of a ten-minute walk from Avery Fisher Hall) and my first time attending the Gotham Chamber Opera, to see Toshio Hosokawa’s dreamy static/dynamic vision of Poe’s The Raven.  The intimate staging for a cast of two (one singer, one dancer) was far removed from a night at the Phil, but fit very sharply into the biennial.  It seems the trust the Philharmonic extended to its artistic partners could have reciprocal benefits: perhaps future biennial festivals will have wider cooperation, and perhaps audiences (myself included, with Gotham Chamber Opera) will find their way back across the new bridges that are built this week.

The idea of taking a dip in what goes on all over the city of New York is hugely audacious for any one organization.  Even the Met’s objective—one opera a night for most nights of the year—seems to pale in light of such a challenge.  But perhaps that will be the future of this biennial: the loose netting of an exhibition as the guiding factor in a collection of new music from groups, artists, thinkers and fans from all over the city.  Tonight, I will hear Alan Gilbert speak about his ideas with leaders from Venice, the Whitney, and the Public Theater.  For today and this year, the question remains:  “What’s the NY Phil Biennial?”  It may be premature, but perhaps we can predict its future cousin: “What’s on the NY Phil Biennial?”