Composer Paul Rudy takes to heart the idea that “nature’s wisdom follows the path of least resistance.” Active listening and intuition play vital roles not only in his composing process, but also in his work as an educator and performer.


Composer Paul Rudy takes to heart the idea that “nature’s wisdom follows the path of least resistance.” Although he knew this intuitively in his early “pre-composer” days as a self-described “mountaineer, carpenter, and vagabond,” it took time and plenty of experimentation in order to integrate the concept into his artistic life. But despite what many may consider a very late start (he did not compose his first piece until he was 26 years old), once he found his stride, he has more than compensated for lost time with a large and ever-expanding catalog of electronic, electroacoustic, and instrumental works that have earned him numerous composer golden eggs such as the Rome Prize and a Guggenheim Fellowship. He currently holds the position of Curator’s Professor at the University of Missouri, Kansas City, where he has taught since 1999.

After years of wrestling with his composing process, Rudy had a breakthrough with the piece Degrees of Separation, for amplified cactus. (Yes, you read that right—cactus.) Realizing the folly of attempting to notate musical directions for a cactus, he threw away his score paper and created a graphic text score that left ample room for improvisation, and he considers it one of his most successful pieces. Two years later, during a residency at the Helene Wurlitzer Foundation of New Mexico, he had a transformative experience composing In lake’ch, a long-form electronic composition, which took shape quickly and without the struggle he had become accustomed to, as a result of taking a fully improvisational approach to the composing process. He remembers, “All along I had this information that was whispering, ‘Do this. Try this. Work this way.’ And when I did that, it was being affirmed by the world… If I don’t hear something, it’s because I’m not listening, because I’m not paying attention. I’m not attending to what’s going on around me.” 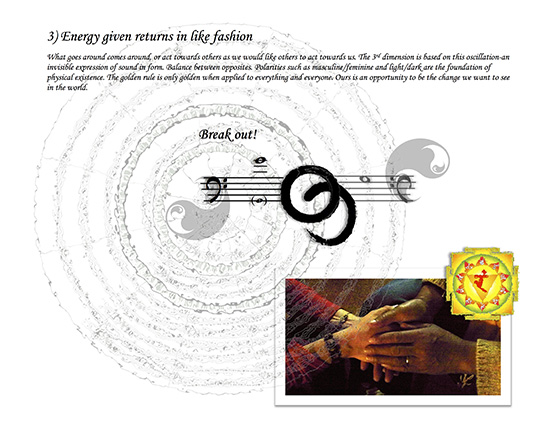 A page from Seven Spiritual Laws of Life: Guided solo or group meditations for any instruments or voices and fixed media by Paul Rudy. Used with permission.

And he is walking his talk; active listening and intuition play vital roles not only in his composing process, but also in his work as an educator and performer. One of the courses Rudy teaches at UMKC is a mandatory improvisation for composers class that emphasizes listening skills and hones the ability to perform spontaneously within a group setting. After sitting in on two sessions, I can say for a fact that the performances I heard—which were primarily by undergraduate students—were some of the most nuanced, and sonically compelling improvisations that I’ve heard by any musicians in a long time. Rudy is also passionate about exploring the healing power of sound, and his performances now incorporate his own overtone singing, as well as improvisational material that delves into the meditative and therapeutic qualities of sound.

Following intuition has served Rudy well, and he continues to follow those quiet whisperings. He has started a monthly sound healing circle in Kansas City. He is particularly excited about the new quartz singing bowls that he plans to include in those events and in his own performances. He is completing a film score that will be premiered in the spring of 2014. When he is not teaching composition and electronic arts at UMKC, he can be found on his farm outside Kansas City. He might be hunkered in his electronic music studio, or chopping wood outside, but regardless, he’s always committed to listening.