One thing that hasn’t changed in all these years has been our goal to always be inclusive of the broadest range of music that could be considered “new” American music whether it was notated, improvised in a club, assembled in a studio, or found sound.

You’re not delirious; it really has been 15 years since NewMusicBox published its first “issue”! So much has changed about the internet since then, but our dedication to the music of our time and those who bring it to life has remained as strong as ever. Please join us in celebrating 15 years of NewMusicBox by making a gift today.

At the time of NewMusicBox’s launch (on May 1, 1999), we were faced with a somewhat daunting task. We were the only national publication focused specifically on new music created by Americans; we created NMBx because there was nothing else. Back in November 1998, I was hired with the express goal of making this thing happen by Richard Kessler who was then the executive director at an organization called the American Music Center. (AMC merged with Meet The Composer to form New Music USA in November 2011.) It took six months, but—with the help of then-associate editor Nathan Michel and our first web designer Stacie Johnston of SomePig.com (which is still around)—we actually did it!

Two days after the launch, yours truly (with significantly shorter hair) gave the first public demo of NewMusicBox at the American Music Center’s 1999 Annual Meeting and Awards Ceremony (Monday, May 3, 1999) at Lincoln Center’s Kaplan Penthouse. Karen Chester is in the photo on the left; Kitty Brazelton and Tom Talbert are in the photo on the right.

While we didn’t have to worry about stuff like galleys and distribution arrangements (since we were, after all, a web-based publication), we were still madly scrambling to get all the articles and photographs in place literally minutes before we went live, and then we immediately had to start over again to work on the next issue. “Issue?”  Yeah, back in 1999 our primary models were still print-based publications and so our plan was to publish once a month, every month, on the first of the month. Though, of course, the internet was pretty much 24/7 from its inception, it wasn’t yet an always-present part of most of our lives at that point. In fact, most folks in our scene (and anywhere else for that matter) weren’t completely sure what the potential of the internet could be and many weren’t even online. Plus those who were had dial-up connections. But we didn’t know any better, so we plunged ahead. Less than eight months after launching, we received the first ASCAP Deems Taylor Internet Award on December 8, 1999. 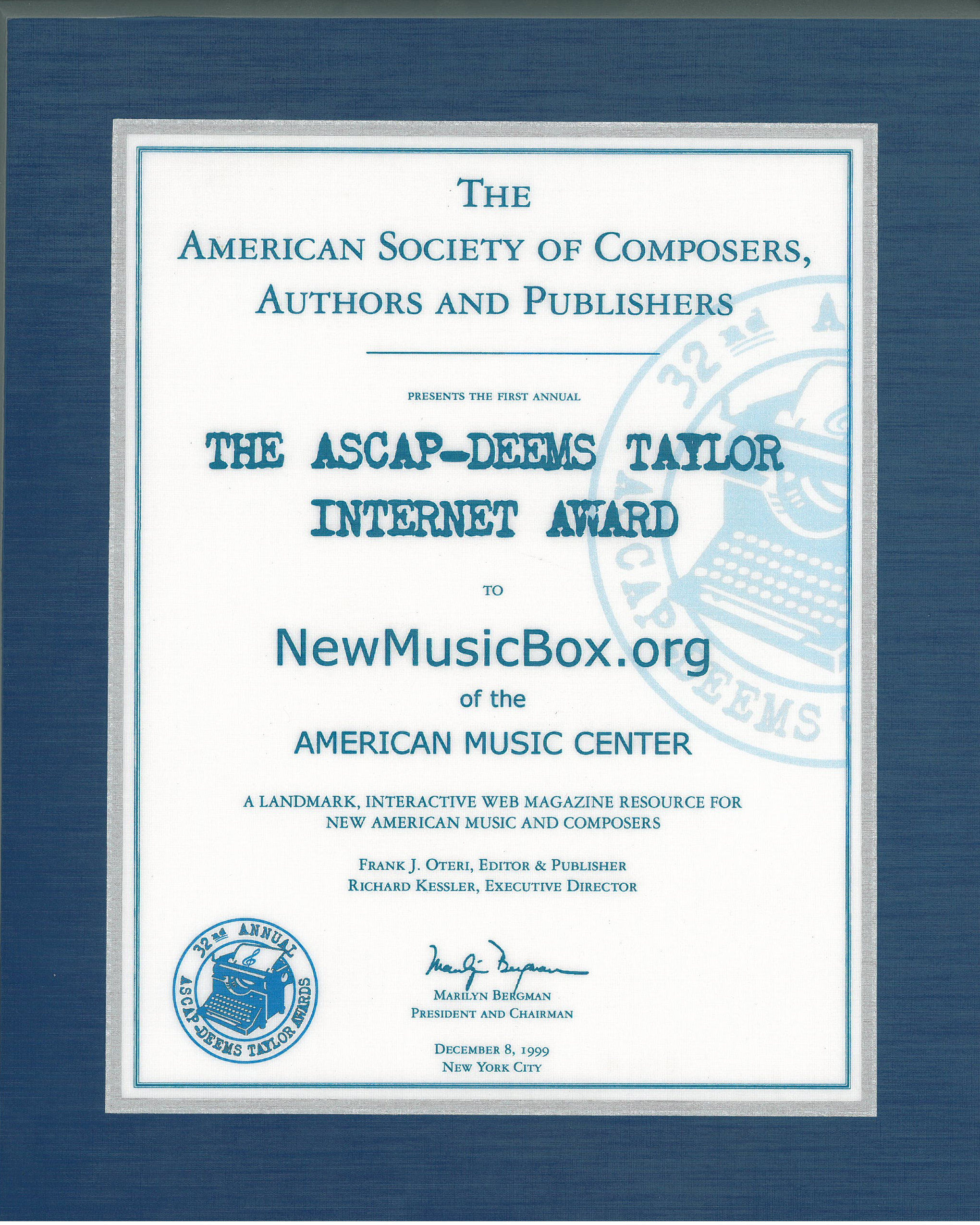 The plaque for that award still hangs in our office.

From the very beginning we recorded our in-depth conversations with folks on video. (What we now call “Cover” we called “In The First Person” back then, but it’s still pretty much the same idea.) But bandwidth was extremely slow and the quality of the video we initially recorded also wasn’t very high, so we actually didn’t start posting video content on the site until the following year.  Yet despite not really having models to emulate other than print publications, we initially conceived articles to be multi-tiered narratives that readers could explore in non-linear ways. Ironically, fifteen years later in a world where practically everyone eats, sleeps, and dreams online, most folks still read articles—the ones they finish anyway—from the beginning to the end rather than playing the kinds of hopscotch games that seemed more appropriate to the medium at the time.
But one thing that hasn’t changed in all these years has been our goal to always be inclusive of the broadest range of music that could be considered “new” American music whether it was notated and reinterpreted by other musicians, improvised in a club, assembled in a studio, or found sound. Another one of our models from the very beginning, because of its voracious inclusivity, was the Bang on a Can Festival. So our very first published conversation was with the three composers who created it and still run it to this day—Michael Gordon, Julia Wolfe, and David Lang. In that talk, there were reference made to music by everyone from Milton Babbitt and Steve Reich to Stevie Wonder and Sonic Youth. 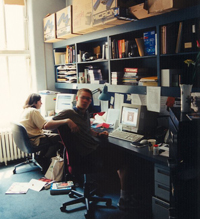 While we’ve never really actively pursued the folks who wind up on the Top 40 (and admittedly back in 1999 I thought that such a category of music would cease to exist 15 years into the future), we have never had a litmus test for style or pedigree and welcome any music that gets people listening and thinking in new ways. Back then I liked to call this stuff “dotorg” music, but I’d nevertheless be thrilled if any music we featured wound up on the Top 40, and–ever an optimist–I still believe that it can. (A side note: early on we actually tried to get to Prince to talk with us for NewMusicBox—one of the few folks we’ve wanted to feature on the site whom we failed to successfully track down. I’m still open to the idea; what better way to celebrate 1999 than with the guy who wrote the song!)

Despite how much our world has changed, it’s surprising how many of the conversations we were having back in 1999 are still going on today, though sadly not everyone involved with those conversations is still with us today. I remember the late Bill Duckworth’s prediction that “the boundaries currently separating composer, performer, and listener will become increasingly blurred.” We’re not quite there yet, but I still hear folks making the same prediction. And, to this day, whenever I hear entrepreneurial composers describe why they do what they do, in the back of my head I hear the words that the recently deceased Fred Ho said to Ken Smith in the very first article ever published on NewMusicBox:  “If there was an ensemble playing the music I heard, I would never have created my own.” That article was a massive compendium offering detailed background on a total of 24 composer-led new music ensembles and collectives (12 of which are still going strong to this day). We followed it up with a similar compendium of 19 recording labels by Steve Smith (no relation). Despite the claims of pundits who were opining that the record industry was dead even before we launched NewMusicBox, more than half of those labels are still around and issuing vital new music in 2014.
What are your musical memories of 1999? Were your reading NewMusicBox yet back then? We’d love to hear from you.