Put down that taco, Austinites! Whether it’s a delicate touch with nail and flesh or vicious pick scrapes run through seven stompboxes, there are whole worlds of great sounds being created by guitarists you’ve never heard of…yet.

It’s not hard to find a guitarist in Austin. Like breakfast tacos and new condo developments, they can be found on just about any corner and every day more of them show up. To stand out among the six-stringers in this town is quite a challenge, a challenge that was met at two shows I heard recently. The first was Austin Classical Guitar’s final show of the calendar year, and the second was a one-night-only appearance by one of the giants of improvisational music, Henry Kaiser. Both were examples of the diversity in the guitar world in Austin, a world that too often is perceived through the lens of blues, rock, and indie music alone. 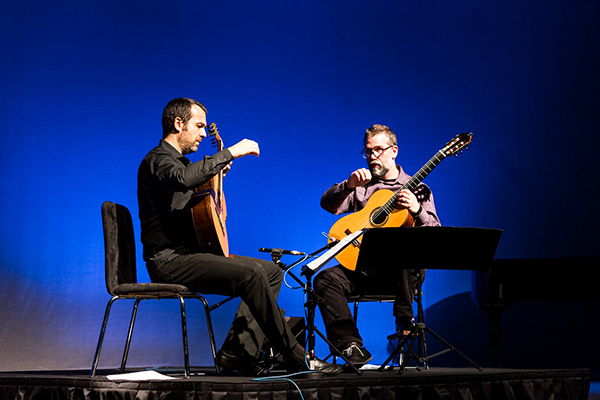 Austin Classical Guitar is among the most dynamic arts organizations in Austin, and though it was founded in 1990, ACG really hit its stride with the appointment of Executive Director Matthew Hinsley in 2003. In the past ten years, it has grown from a modest collective curating a few concerts a year into the premier guitar organization in the country with an incomparable international concert series, an educational program serving hundreds of students in and outside of Austin, and an outreach program in the prison and juvenile detention systems. Part of Hinsley’s artistic vision is that of collaborator, and to that end ACG has in the past worked with the Alamo Drafthouse, the Miro Quartet, and most recently teamed up with Texas Performing Arts to commission a new work from Nico Muhly for next spring. New music has always played a role in the world of guitar in general and the world of ACG in particular, and their most recent concert featured the guitarists Benoît Albert and Randall Avers as duo Les Frères Méduses performing an entire program by living composers (the oldest born in 1955) as well as a world premiere of Memória by ACG composer-in-residence Joseph V. Williams II.

Opening the concert was the ACG Youth Orchestra. They played a strong though brief set, an aural amuse-bouche of sorts and a reminder of the organization’s dedication to community outreach. Following the YO’s set, Les Frères Méduses took the stage and began their portion of the program with Prelude “Mekankisk” by Avers. A bright, shining, technical showpiece, the work pulsed along in an unrelenting 7/8 with only a brief interlude as respite. Though only together for four years, the communication between the two looked like that which you might find in a duo with much more history.  Following the Avers were works by Dusan Bogdanovic and Atanas Ourkouzounov, both beautifully rendered and, though quite distinct, had a similar DNA (perhaps because both guitarist/composers are from the Balkans) almost sounding like bookmatched movements.

The main attraction of the evening was the eagerly anticipated premiere of Williams’s Memória. Williams has worked with ACG ever since his first commission Austin Pictures, but his appointment as composer-in-residence has allowed him to expand his involvement beyond a single work to participate in the educational and outreach programs that are part of ACG’s core mission. While Austin Pictures was a concerto grosso of sorts pitting the Miro Quartet against a small guitar army, Memória was a smaller and more intimate affair. “My ancestors come from Hungary, and Memória freely employs elements of Magyar folk music,” said Williams, and this Eastern European flavor paired nicely with the preceding works. The first of two movements, Prelude opened with block chords in wide-open voicings. Guitarists are wired to arpeggiate even the most static of chords—we can’t help it!—but Albert and Avers played these with precision and none of the rolling that is to guitarists what over-pedaling is to pianists. A move to the minor mode accompanied thoughtful and well-paced trading of parts between the two guitarists; a smooth compositional transition made stronger by the attention to matched tone and attack by both players.

Along with their solo and orchestral experience, string players (here I’m thinking more of the rosin and bow variety than us pickers and grinners) traditionally come up in a chamber tradition as well. This is generally not the same for guitarists (thought ACG’s educational wing is working hard to change that) and as a result guitar duos can sometimes sound simply like two guitarists playing at the same time instead of as an integrated unit. Les Frères Méduses sounded like one guitarist, seamlessly alternating lines and phrases with only the occasional glance to facilitate their communication. The second movement, Fantasy, featured a more active texture and an insistent bassline that pushed the work forward to its conclusion, resulting in a standing ovation from the crowd. This sort of reaction has become pro forma at many contemporary shows, but I’ve been happy to see that recently when they occur they are typically genuine and well-deserved, as was the case here. The commissions, outreach, and integration with the best that Austin has to offer are why ACG has consistently packed auditoriums with devoted followers, but it’s not the key to their success. Hinsley’s philosophy is simple, “The primary role of a great classical guitar nonprofit organization is not to play concerts, teach classes, bring guest artists, or compose new pieces.  The primary role of a great classical guitar nonprofit organization is to serve the community.”

Henry Kaiser has been around the block. The guitarist, improviser, film composer, and research diver was in town for one night only to perform at The Owl, a small venue on the east side of town which features experimental music. A longtime collaborator with Fred Frith, Kaiser has gone through a variety of stylistic changes in his career. Early improvisational work gave way to a retro-rock phase in the ’80s, a long-term project involving the work of Miles Davis, and a number of projects with musicians around the world.

At the core of Kaiser’s creative output is experimental free improvisation, and it was a set of this material performed with local and regional players that I saw at The Owl. Walking into the venue felt more like walking into a friend’s funky house than entering a conventional club or hall. Once through a modest foyer, I took a quick turn around a corner and boom, there was the stage. Several dozen people filled the small space, eager to see a legend work his magic. Kaiser was joined by percussionist Nick Hennies, trombonist Steve Parker, and bassist Damon Smith for an extended improv set. 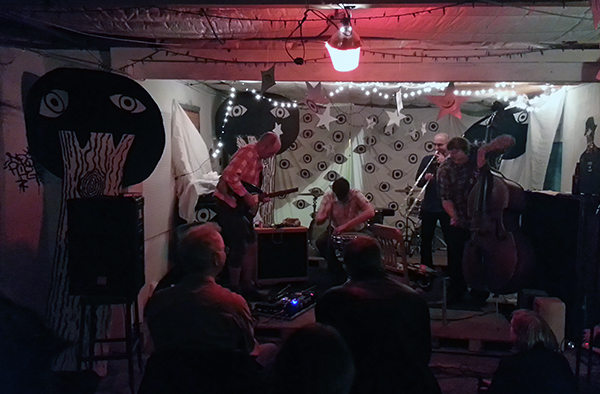 The distinction in this set was (from my perspective) the degree of deference paid to Kaiser by the rest of the band. While certainly a mostly democratic affair, it seemed that Kaiser’s lead was followed by and large by the other performers. Having said that, Hennies, Parker, and Smith all have extensive and significant improv experience in a variety of settings, and at no point did any of them seem to be shy about the idea of leading the group down one path or the other. Kaiser coaxed scratches, percussive raps, and ebowed keening from his seven-string archtop while Hennies bowed his snare and occasionally took to playing the bottom of the drum. Smith took Kaiser’s lead, tapping out a Morse code rhythm on the bass before weaving a drumstick through the strings creating an adjustable bridge of sorts. In the course of the set, Parker’s trombone was assembled and disassembled, at times leaving him with only the slide to whistle through.

Typically when musicians perform instrumental music, they are either looking at each other, at their music, or at something in the distance. Kaiser is not a typical musician. At times he stood and stared at the audience, not in a confrontational way but almost as though he had asked a question and was waiting for an answer. It wasn’t uncomfortable strictly speaking, but when the room is only five rows deep, it’s a bit unusual at least. However, if lasers had shot out of Kaiser’s eyes it would not have been weirder than what happened next, at least for me. Kaiser put away the archtop (from which he had elicited all sorts of otherworldly sounds) and brought out a Klein electric guitar. As I indicated above, in a former life I was a guitar player and for many years I was a rabid gearhead. I’d never seen a Klein in captivity, and frankly if he had simply set it on a stand I probably would have sat there doing my best RCA dog impression. The Klein is built to be ergonomically sound and includes a locking tremolo which allows for all sorts of pitch bending, dives, and other microtonal play. Joining the Klein, Kaiser added to his already wide sonic palette with an array of pedals and other outboard gear.  During this portion of the set (the music did not stop during the instrument change) Kaiser often “played” the dials on his foot pedals more than he did the strings of the guitar. By doing so he created a large analog synth of sorts, one in which the guitar was a driver and provider of raw material to be altered, chewed up, and spit out by the various processors. The result was that Kaiser was sort of his own opening act, with a relatively subdued first set that proceeded attacca into a nuclear meltdown of bizarre tones, distorted riffs, and altered states.

Somewhere out on Sixth Street, a dude is playing some righteous blues, and that’s cool. I’m glad he’s out there. Folk singers are populating coffee shops and filling the air with songs of lost love while indie bands are beating the hell out of a handful of barre chords a few doors down. Fantastic, and I mean that quite sincerely. I’ve been in those places and, on more than a few occasions, I’ve played those roles. And when I quit doing it someone else came along and filled my shoes, and I don’t think that trend will change anytime soon. However, I’m very glad there are people out there looking at all the things you can do with six strings.

Whether it’s a delicate touch with nail and flesh or vicious pick scrapes run through seven stompboxes, there are whole worlds of great sounds being created by guitarists you’ve never heard of. Put down that taco and go check ‘em out.