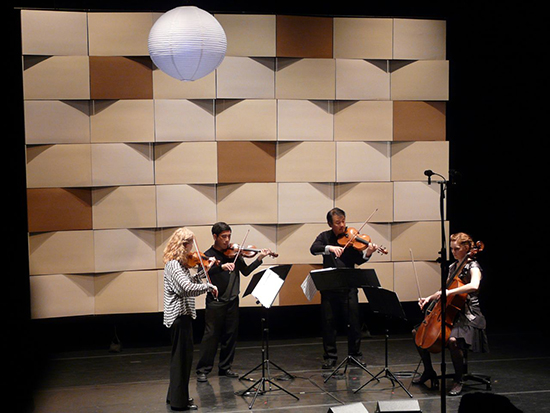 Del Sol was founded in 1992 by violist Charlton Lee, with current first violinist Kate Stenberg joining shortly afterwards in 1995. Violinist Rick Shinozaki has been a part of the group’s growth for nearly a decade; the most recent addition of cellist Kathryn Bates Williams happened in 2010. All four have deep roots in the San Francisco area: the three longstanding members are Bay Area natives, and three are also alumni of the San Francisco Conservatory. Given their frequent appearances in the area–whether at the Other Minds Festival, at this year’s Cabrillo Festival, at Oakland’s Garden of Memory, at the Switchboard Festival, collaborating with local dance companies and other Bay Area musicians, and so on–it can be easy to take Del Sol’s presence for granted. Del Sol Days was a welcome opportunity to be reminded that this consistently hard-working ensemble has been doing a yeoman’s job in our musical community for two decades now.


Of the three performances, I was able to hear only the closing event on December 8. The performance series had opened on the first night with the first San Francisco appearance of an installation by Santa Fe-based composer and video artist Chris Jonas titled GARDEN, Chapter 1: Night, which enclosed the musicians in four walls of scrims on which images were projected. The scrims were removed and replaced with a set designed by Nick Noyes Architecture on the second night, which followed a more conventional concert format, including premieres of works by Lembit Beecher and Matthew Cmiel, and a work that has been in Del Sol’s active repertoire for many years, Gabriela Lena Frank’s Leyendas: An Andean Walkabout. (Del Sol recorded one movement of this work for their 2008 album Ring of Fire: Music of the Pacific Rim.) 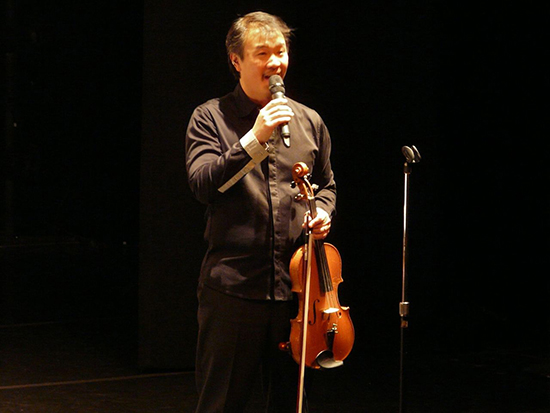 It was immediately apparent from the start of the third evening that Del Sol considered themselves among friends, and indeed many in the audience knew each other and were excited to be celebrating this anniversary with the quartet. Cmiel, himself a local fixture whose work Invocation had been premiered the night before, welcomed the audience with a casual spoken introduction, and during the concert each musician had an opportunity to take the mic to address the audience directly with reflections on the group’s history and personal commentary on the repertoire they were performing.

The evening’s program began with two world premieres, by San Francisco-based Irene Sazer and Bay Area-born Dylan Mattingly. In her work Thunder, Sazer, who is a founder of both the Turtle Island and Real Vocal String Quartets, asks Del Sol to vocalize on phonemes and sing simple melodies while playing, as Real Vocal is accustomed to doing. (Del Sol has been asked to multitask before: in a work by Ken Ueno premiered at this year’s Other Minds Festival, Lee is charged with overtone singing while playing; in Chinary Ung’s Spiral X: “In Memoriam”, also on Ring of Fire, the musicians sing, whistle, and shout precisely notated material as well.) In introducing Gone, Gone, Gone, Lee noted that they first worked with now 21-year-old Mattingly when he was a child participant in Del Sol’s QuartetFest, a chamber music workshop for young string players that has been running for 16 years. In this new work, Mattingly mines the legacy of American folk music for harmonic and melodic material, weaving it into a broad landscape of sustained chords reminiscent of mentor John Adams’s Christian Zeal and Activity to open the piece and ebulliently cascading lines to close.

Del Sol then reprised Bagatelles by Oakland resident Mason Bates, which they had premiered at this past summer’s Cabrillo Festival of Contemporary Music in Santa Cruz. Bates sampled the musicians in a studio making “all manner of strange sounds” as he writes in the program notes, and processed the samples to create the beat-heavy electronic backing track for three of the four short movements. A video of the second and fourth movements, “Scrapyard Exotica” and “Viscera,” previewed at a Grantmakers in the Arts conference, can be seen below, starting at 6:00.


The second half of the program featured Bay Area didjeridu player Stephen Kent, who has collaborated with Del Sol on Australian composer Peter Sculthorpe’s String Quartet No. 16. Kent and the quartet performed this work in 2007 at the Library of Congress (certainly Stradivarius could never have imagined the didjeridu’s overtones vibrating the wood in his instruments) and recorded one movement for Ring of Fire. After a brief solo set in which Kent played didjeridu while singing and ringing wind chimes, Kent gave an impassioned introduction to Sculthorpe’s work, which was written in response to the humanitarian crisis that has developed in Australia due to the flight of Afghan refugees (PDF) seeking asylum. (In August alone nearly 2,000 Afghans arrived in Australia by boat.) 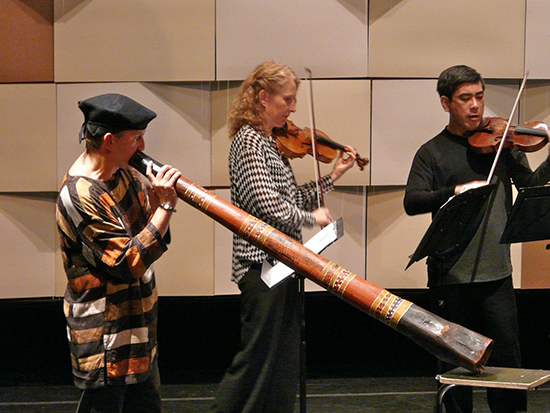 This was both Del Sol’s cleanest and most emotionally charged playing of the evening, with Kent’s variously sized didjeridus sounding like animalistic spirits pervading the Afghan love song on which three of the five movements are based. The first four movements, titled “Loneliness,” “Anger,” “Yearning,” and “Trauma,” are heartrending in their despair, but Sculthorpe closes the work with “Freedom,” giving the first violin a soaring melody which flies unfettered above the Australian expanse provided by the didjeridu’s drone.