One Size Doesn’t Fit All, but Can You Hand Tailor a Consortium?

Even with our modest instrumentation guidelines for the composers to work with as a core ensemble, there were plenty of schools that simply didn’t have the instruments or resources to participate.

With the other members of the Libera Composers Association already hard at work on their new pieces for the consortium, my co-director Max Lafontant and I set out to find interested directors for the project. Our alma mater, Luther College, is notorious for its numerous Dorian Festivals and camps—programs that host performances and clinics on campus for high school musicians from around the Midwest. We were able to convince the music department to give us a list of band directors who had sent students to the Dorian festival last season, knowing it would be a great source of directors who already had positive ties to Luther and its music program, even if they were not alumni themselves. When we got the list of over 100 bands, Max and I spent weeks combing through school websites to check out the programs and directors.

While many schools and programs were basking in the public glow of their marching band seasons (early-to-mid fall), we found that this was not the case across the board. Some of the band directors no longer taught at the schools. Some had recently had their budgets slashed. (One school in Iowa had even had their band program eliminated entirely.) Max and I became concerned, realizing that—even with our modest instrumentation guidelines for the composers to work with as a core ensemble—there were plenty of schools that simply didn’t have the instruments or resources to participate. While it was too late to accommodate schools in such dire positions for that particular season, it did impact how we planned to move forward with subsequent seasons. (More on this next week.) In the meantime, we reached out to about ninety schools from the list provided to us by Luther, and a few dozen more directors from a pool of colleagues and personal connections. We even had our composers reach out to directors from their hometowns, hoping to make local connections.

Grade 3 concert music can be difficult to find for directors.

Initially, there was a huge response from the band community—grade 3 concert music (late middle-school or early high school levels) can be difficult to find for directors, and many of them indicated they had never been part of a commissioning experience or consortium before. However, our consortium model was unusual. Normally bands will commission a work in tandem from one composer, sometimes receiving updates throughout the composition process, and then premiere the works later in the year. Sometimes bands will join consortiums once a work is finished based on a perusal score and the composer’s reputation. Our consortium had a range of composers and the works were already underway, but incomplete. While we had many interested directors in late September, we found that it was difficult to sustain that initial feeling of investment until our perusal period in January. While we had a band or two join the consortium officially before the scores were complete, most of the directors wanted to see music before committing, but didn’t want to wait until January to complete their spring programming. The biggest difference between arranging a consortium and a single commission is how hand-tailored a particular work can be to a specific band (the latter having the greatest potential for customization, while the former tends to be more generic), and our project was attempting to synthesize elements of both experiences. 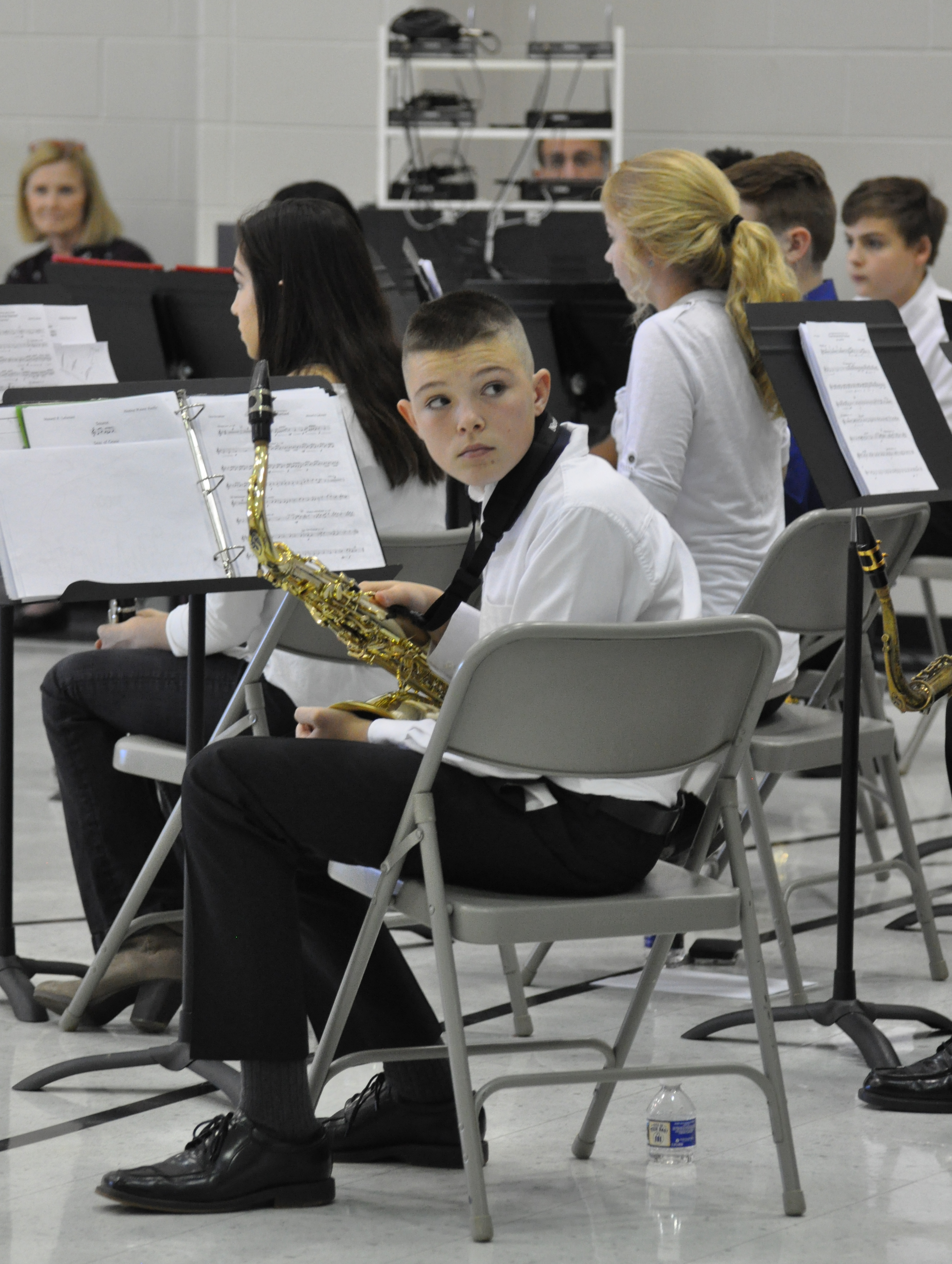 Members of the Albany, Georgia-based Deerfield-Windsor School Band rehearsing for the first performance of a consortium piece, a composition by Max Lafontant, which was featured on the band’s February 26 concert. Photo courtesy of Deerfield-Windsor music director Justin Swearinger.

Max and I tried several different tactics to address the issue. In some cases we gave the directors a summary of the works being composed, having the composers write abstracts about their intentions for the pieces they were working on. In other cases, we put them in contact with the composers directly to form more personal connections. We sent out a newsletter with information about the directors who had joined, updates on the works-in-progress, pictures of the composers’ workspaces, and even a short article with tips about how to work with a composer (since so many of our directors expressed this was their first time). Max and I had talked with our mentor, Dr. Brooke Joyce, about high school band directors at the beginning of this process. He told us that band directors are some of the most overworked, exhausted, underfunded educators in the country. We needed to keep our communication with them convenient, clear, and concise. It would be all too easy for them to drop a project like this otherwise. Therefore, one of our greatest challenges was trying to balance our communication—to be proactive without badgering, to be clear without being verbose. Also, there are as many different preferences as there are directors; some of our directors loved getting newsletters with helpful tips, others found it obnoxious. Spreadsheets abounded as we kept track of a great number of details about each director and school we worked with; not just to help us keep directors on the project for this year, but also to help us understand how to better serve directors in the future.

So many of the band directors expressed this was their first time working with a composer.

The recording session with the Luther College Concert Band proved to be a very useful recruiting tool. Dr. Joyce helped us to organize and run the session. We had the band (under the direction of Dr. Joan deAlbuquerque) read and record 30” to 1’00” of music from each piece so we could post excerpts online. This was a great resource for interested directors, since they could get a strong idea of what the pieces would sound like with a real band even though the works were yet unfinished. The reading session was also helpful to the composers, who could now gauge how difficult their piece may be for high school students, make note of what in their score appeared to be unclear to the conductor and the ensemble at first glance, and also simply hear how their piece was sounding with a live ensemble. All of the composers in the LCA were grateful that our alma mater was so supportive of the project, willing to give over precious rehearsal time for these readings.

We already have a healthy number of performances scheduled for the coming season and a great number of directors who are itching to participate next season.

While many of our groups are currently in the Midwest, Dylan Carlson and Neil Quillen are both based out of California and have been working to bring bands from L.A. and San Francisco into the project. We also made contact with an international school in Tokyo, Japan, and are working to expand through similar avenues next year. Our first performance (which took place in late February) was from a small band in Albany, Georgia, performing Max’s work. Also, while we are still looking for more bands to join the consortium, we already have a healthy number of performances scheduled for the coming season and a great number of directors who are itching to participate next season. While we definitely faced our challenges this past year, Max and I learned a lot from the directors, administrators, and composers we’ve been working with, and we are looking forward to developing this exciting collaboration next season.