On Networking: A National Conference Preview

For five days, choral leaders will meet in one place and be inspired by performances, attend interest sessions presented by teachers they admire, and forge new connections that—for the composers present—often lead to new commissioning projects and second and third performances of just-written works.

At the end of February, choral directors from all over the country will descend upon Kansas City, Missouri, for the biennial national conference of the American Choral Directors Association. Do not be fooled by the moniker of “national”; this is truly a global event for thousands of conductors, composers, educators, publishers, and other industry professionals from around the world. For five days, choral leaders will meet in one place and be inspired by performances, attend interest sessions presented by teachers they admire, and forge new connections that—for the composers present—often lead to new commissioning projects and second and third performances of just-written works.

I am grateful to serve ACDA as the chair of the Standing Committee on Composition Initiatives. In this role, I work with my colleagues—composer Susan LaBarr and conductors Andrew Crane and Nancy Menk—to consider how ACDA can better serve the community of composers that exists within and just outside our choral orbit. We’ve been working diligently for two years, asking ourselves how we can welcome new composers into our choral profession. The national conference is one of the best ways to do just that, as it serves as a perfect place to build new connections through networking.

It can be incredibly daunting to attend a national gathering like this for the first time. Composer Dale Trumbore has already laid out so eloquently the “how to” of negotiating the professional choral conference in a terrific blog post. I recommend it to you highly as essential reading in preparation for any choral conference, whether it be your first or fifteenth. She speaks with great clarity of insight, and I have learned much from reading her personal stories. I know you will, too. 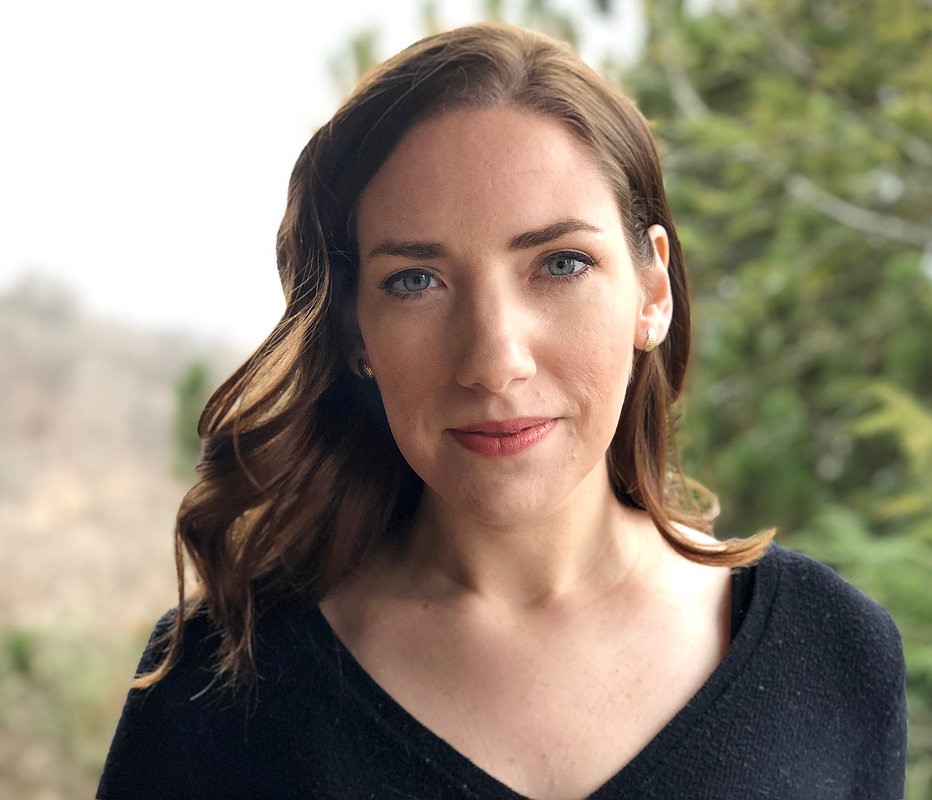 Dale is also being honored this year as the inaugural winner of the Raymond W. Brock Competition for Professional Composers, “professional” to distinguish this competition from the “student” competition which will now be offered in alternating years). (Aside: Prior to this year, the Student Competition was offered annually since 1998. ACDA decided recently to begin offering a professional competition, in response to many remarks from composers who felt there were fewer opportunities for composers who had aged out of “young” or “emerging” status.)

Dale’s winning work In the Middle will be performed by The Aeolians from Oakwood University and conductor Jason Max Ferdinand on Thursday, February 28 from 2:00-2:45 p.m. in Helzberg Hall (Gold Track) and 4:15-5:00 p.m. in the Muriel Kauffman Theater (Blue Track).  You can preview this work below, performed by Brandon Elliott and Choral Arts Initiative.

If you’ve never attended a choral conference, I welcome you to join us! Below, I’ve included a preview of some things that composers will not want to miss at the coming ACDA National Conference, along with a few pieces of advice.

1. Hang (i.e. “network”) with other composers and conductors at the first-ever Composer Fair and Happy Hour.

On Wednesday, February 27 from 5-7 p.m. in the Kansas City Convention Center Exhibit Hall B, we will feature our first-ever Composer Fair & Happy Hour, a meet-and-greet opportunity for ACDA members to have quality face time with composers from around the world. Distinct from the exhibit hall area, the Composer Fair is a two-hour “pop-up” experience, where members can all gather in the same space and move from table to table, interacting with composers of many ages and backgrounds. Conductor members will gain valuable time with composers of the music they love, while also having the chance to meet a composer they’ve heard about but never met in person. This is a chance for composers to also meet conductors of ensembles they’ve admired.

Here is the list of composers who have registered to take part in this inaugural event, in alphabetical order:

Also, for very early rising composers attending the ACDA conference as well as choral directors/choristers interested in new music and in meeting a bunch of composers, there will be an informal meet-and-greet at the nearby Chez Elle creperie on Friday, March 1 at 8:00 A.M. with Laura Krider and William Lackey from the American Composers Forum and Frank J. Oteri from New Music USA. I’ll be there, too. But in order to make sure there’s room for everyone, please let us know if you are able to be there as soon as you can, so we can give the folks at Chez Elle a head count and also inform us of any food allergies/intolerances (e.g. gluten-free, vegan, etc.) so the kitchen can be prepared. Separate checks will be provided; see Chez Elle’s website for menu and pricing.

2.) Be inspired by performances of new music, such as “The Music of Chen Yi and Zhou Long: Legacy from the East.”

This may come as a shock to many composers, but the overwhelming majority (greater than 75%) of music performed at ACDA National Conferences was written in the last fifty years. Stop and admire that statistic for a moment. It’s quite impressive, and immediately shows as false the oft-cited claim that choruses are fearful of new or contemporary music. Nothing could be further from the truth.

On Wednesday, February 27 at 6:30 p.m. (Blue Track) and Thursday, February 28 at 6:30 p.m. (Gold Track), the University of Missouri-Kansas City Conservatory Singers (Robert Bode, cond.) and UMKC Conservatory Concert Choir (Charles Robinson, cond.) will give a featured performance of the music of Chinese-American composers Chen Yi and Zhou Long. The presentation will feature a wide range of choral a cappella and choral-instrumental music by these two dynamic and long-established composers. The performance will conclude with Zhou Long’s major work, The Future of Fire, for the combined choirs and wind ensemble.

3.) Go to interest sessions, but not all of them. Here’s a curated list.

The ACDA National Conference features a veritable smorgasbord of possible interest and literature sessions for attendees to witness. It’s impossible to go to everything, so don’t even try. (Literally, actually impossible.) So for your guidance, here is a curated list of some of these sessions, earmarked in the conference program booklet as “of possible interest to composers.” Reading the titles alone gives you a good sense of the diversity of perspectives present at this gathering. 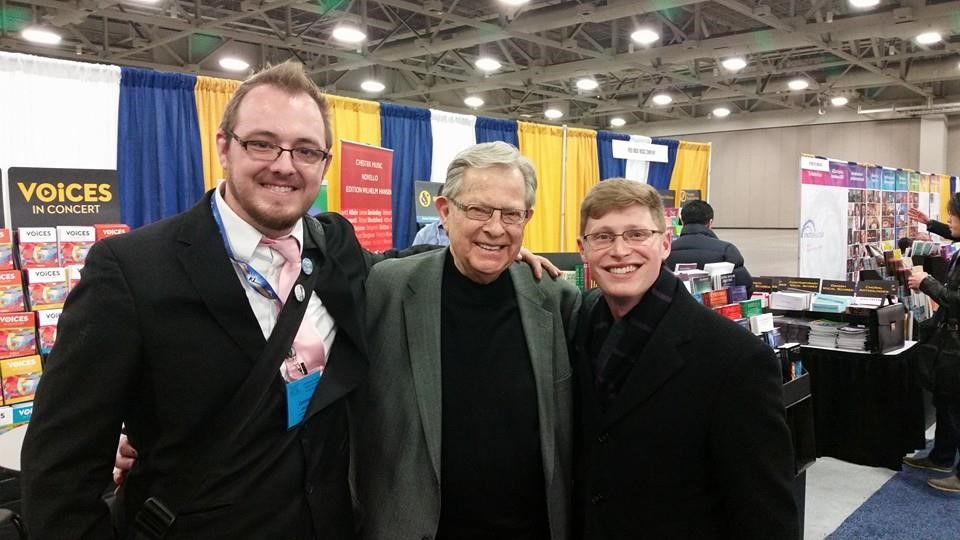 4.) The Exhibit Hall: Be overwhelmed, yes, but be present.

The Exhibit Hall is unquestionably one of the most overwhelming places to be at the national conference. Located this year in the Kansas City Convention Center, there are literally hundreds of exhibitors, from publishers and composers to tour companies and instrument makers, and it’s always very loud. The chaos of people moving in and out and about can be difficult if you’re not used to such activity.

But, some of the best conversations I have during the entire conference occur in this room, when I’m walking around with no purpose in particular. I’ve met conductors for the first time who have performed my music. I’ve run into composers who are present at the conference for the first time, hoping to meet a friendly face to show them around. On more than one occasion, I’ve started the conversation about a commission in the exhibit hall, and then I’ve followed up the next week with an email. So much business and connection happens on the Exhibit Hall floor, and I encourage you to plan unstructured time there to allow for such serendipity.

The exhibit hall is also the perfect place to meet with potential publishers. Representatives from all of the major publishers have booths in the hall, as well as many of the online distributors (MusicSpoke, Graphite Marketplace, etc.) that allow composers to keep the copyright to their scores. Go and meet with these people, and bring copies of your scores to share.

This gets to one larger point about networking in general: never be afraid to say hello, even if you don’t think you have anything in common. Taking that first step to make a connection with a simple hello and a handshake will lead, step-by-step, to a greater professional network of colleagues.

5.) Finally: Do something that has nothing to do with choral music.

Maybe you step away from the conference for an afternoon to go to a museum. Or maybe you decide that on Friday night, even though you want to go to a concert, it might be better to have a leisurely dinner with a friend you haven’t seen in years. Whatever it is, we can’t all be “on” for four days straight without going a little crazy, so step away for a bit and don’t feel shame in doing so.

If you’re already registered for the ACDA National Conference, great! I look forward to seeing you there. If you haven’t, it’s not too late. To do so, you first must join as an ACDA member and then register for the conference. Please note that the cost to attend, even with the cost (and benefits!) of annual membership, is cheaper than many other music industry conferences. The cost is well worth it.

If you are interested, online registration closes at 11:59 p.m. Central Time on February 18. Learn more at the ACDA website.

Conference attendance has been one of the great joys of my career, as it combines the best parts of being a professional with belonging to a community of colleagues and friends. I hope you will feel welcome to join our choral community at the ACDA National Conference this year and take part in the wealth of new music offerings that will be of interest to composers from all walks of life.