Although I was always generically interested in music as labor, it was really my involvement with Occupy Wall Street that showed me what the contemporary struggles were in this field. I hope the NewMusicBox commenting community will join in on this conversation, so we can get an even greater sense of where these struggles for fairness and dignity are happening, and what we can do as a community to support them. 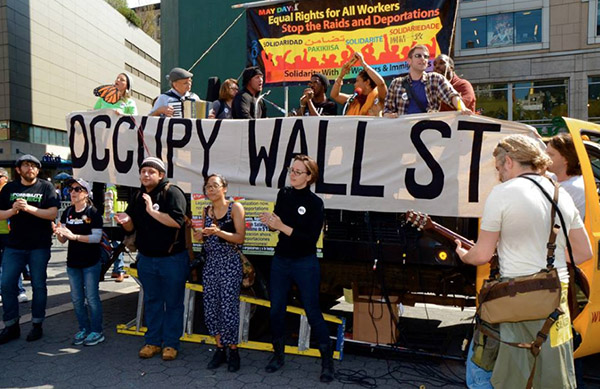 When I was asked to be a NewMusicBox columnist, I understood that one of the many points of the project is to facilitate conversation, and that “debate was welcome.” I’ve decided to embrace the idea and spend a month writing about conflict, specifically the ways in which music makers are agitating for better pay and working conditions in various parts of the industry.
Because this is NewMusicBox, I want to steer towards issues and case studies that speak to new music and its community. That said, I also want to state a belief that I plan to explore this month: that questions about funding, sponsorship, contracts, and payments are generically similar across many musical and creative domains and also across many “precarious work” contexts. Also, that these areas mostly land us in the working and middle classes in the neo-liberal West. I say this because I suspect that most people working in new music have working class or middle class economic situations, regardless of upbringing, education level, or identity. Perhaps I will be wrong in my hypothesis, and I would be more than happy to be wrong if the reality is that most music makers are actually making enough from music to be considered upper class, but I somehow doubt we are all living as “rock stars.” That is what I want to deal with in a more serious and empirical way this month.
Although I was always generically interested in music as labor, it was really my involvement with Occupy Wall Street that showed me what the contemporary struggles were in this field. The rest of this column is a short tour of how I got to the place I am now and why I consider Occupy the foundation of my current attitudes about musical labor.
When OWS sprung up in downtown Manhattan, I showed up to lend support and to hear what was on people’s minds. I was a music journalist who had played in new music and indie contexts for a decade, but I had wandered from performance when grad school took over my life. Within a few days of the occupation’s beginning, I signed an online pledge of support via the site Occupy Writers, led by Jeff Sharlet. I began editing and writing for the website, and visiting the park more often.
After my friend Will Hermes sent us a piece about Jeff Magnum’s Zuccotti performance—

—I was both inspired and frustrated by my own work for the movement. I was a writer, but I wanted there to be something like Occupy Writers for musicians, because music is what I loved and music is what I knew about. I lay in bed one night about two weeks after the occupation started, worrying because no one had launched a campaign for musicians.
That night I had a sensation that was new to me. I knew that I wasn’t qualified to do this thing, I wasn’t a “real” musician and felt I thus didn’t deserve to step into the space of organizing a musician’s solidarity campaign, but I decided I was going to try to do it anyway. I had a little of the Occupy spirit in my veins when I popped over to my computer at three a.m. and bought the URL for occupymusicians.net, finding out in the morning that another New Yorker had bought the dot com only a day or two before me. “Why not join forces?” Sharlet wrote, and gave me the guy’s email. And so I met Judd Greenstein, an entrepreneurial young composer who also wanted to show solidarity, and together we launched occupymusicians.com.
When we launched we didn’t know what the site would do, other than that we wanted to show the world that many—indeed tens of thousands—of musicians felt kinship with or were part of the 900+ occupations held around the world that fall. To me it meant that the musicians not only supported the direct action tactic of occupying public space, but also that they had a consciousness about where they fit in the economic space. Most musicians, even the wealthiest among our list—such as Tom Morello or members of Sonic Youth—were the 99 percent. We decided that the list was just a list–a public statement. What musicians and activists did after that step was up to them.
We launched the website, got a lot of media attention, and began collecting a lot of great music and documentation of music (check out this Occupy-dedicated piece “Occupy Air” by Pauline Oliveros, for instance). The site was a global thing, but quickly after its launch I got involved in the New York OWS music working group. This meant coming off the computer and really doing the occupy thing, in the streets. I had to become a street conductor, performer, manager, wrangler, MC, and peacekeeper. I found myself in improvisational action contexts that challenged my comfort and creativity. (For instance: helping opera goers scale police barricades to get on the people’s mic at Lincoln Center, part of an action Alex Ross also wrote about. [I’m the girl in an orange hoodie shouting in front of Alex].) I had to sit in meetings and help hash out what our group’s values were when it came to recording, licensing, sponsorship, and other forms of money and prestige exchange at a moment when big media and corporations really wanted to be part of the Occupy space. I was pretty shy so all this street stuff scared me, but really it was the meetings that were the hardest part. I was at a loss when it came to how to behave, having spent a half-decade in the apolitical, totalitarian miasma of a Ph.D. program—a place where I learned I shouldn’t speak at all (literally, I was told to stay quiet in meetings until tenure), yet alone speak up for my values.

In the music working group, we had no road map except the strict use of consensus process, and with vastly different world views and the stakes seeming so high, we had huge arguments. We were from the worlds of classical, jazz, folk, hip hop, electronic, indie, Latin, Jewish traditional, street music. We were old hippies, anarchists, socialists, libertarians, liberals, feminists, and curiosity seekers. It was like the first day of college, only where 1,000 cameras were pointed at all the sophomoric choices and inarticulations. While it brought out the grandstander or bully in some, in me the process kept me quiet, observing others for about six months. I had no idea what to say, which as a journalist and wannabe academic, was terrifying. My whole world was shifting. In that time I stopped seeing musicians in terms of genre, stopped seeing people in terms of their class or education level, and gradually began to stop only thinking of how each life decision could support my career. Then, and this is still very much in process, I began to see what I wanted to do.
By the time I figured out what I wanted to do in the movement at least, it was six months in and the official story was that “Occupy was dead.” The mainstream media said it had failed aside from planting a meme of class consciousness in the minds of Americans. Even as I read this pronouncement, I would look around and see that my own world had changed, and that all these new people in my life were changed, too.
It was around that time that I began to see quite a few music-oriented action groups popping up with organizing and agitation plans surrounding issues old (fair contracts) and new (online streaming). 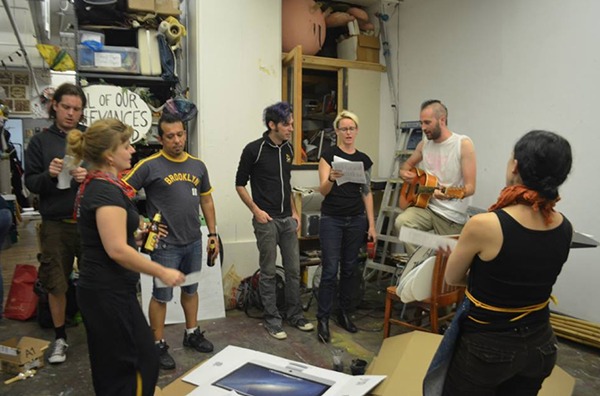 In the three years since the movement began, I’ve seen a definite shift in the tactics used by musicians, organizers, and other people working in the music industry as they attempt to build power and push for fair pay and conditions in the vast and strange landscape of contemporary composition, performance, and recording. As a NewMusicBox columnnist this month, my plan is to write about some of these projects and some of the issues these struggles raise for musicians and music in general.
I certainly am not any kind of expert on the topic, but merely as one who is deeply interested in helping folks in the music industry earn a decent living and have opportunities to present their work. I hope that the brilliant and deep NewMusicBox commenting community will join in on this conversation, so we can get an even greater sense of where these struggles for fairness and dignity are happening, and what we can do as a community to support them. 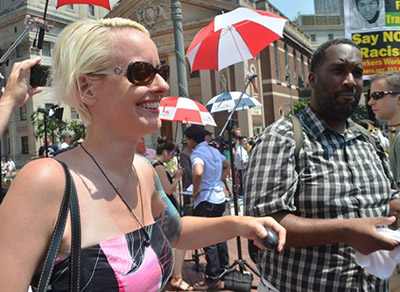 Daphne Carr is a New York-based writer, activist, and educator. She is working on a memoir about contemporary music and activism, using Norman Mailer’s Armies of the Night as inspiration.