“How much information does a composer working today attempt to convey to musicians through a written score?” 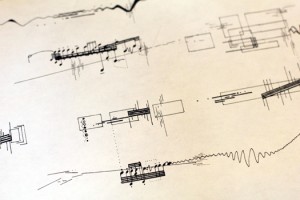 Sample from Scroll by Will Redman

“How much information does a composer working today attempt to convey to musicians through a written score?”

This is a really great question, asked by some students (non-musicians) in a course covering the history of music notation. A neighbor who teaches the class stopped over to ask me my opinion on the matter last night (being the only composer on the block can be fun!), and I’ve been tossing the question about in my head ever since.

Although my answer, which was basically “it depends on the composer,” was completely not helpful (because apparently her students, mostly engineering majors, wanted actual numbers), I’ve been pulling together some writings and examples of different notation styles for her to share with the students to help illustrate such an open-ended response. There are tons of options, but some favorites of mine include scores of George Crumb, Witold Lutosławski, Eleanor Hovda, Brian Ferneyhough (for a shot of jaw-dropping disbelief mixed with anxious butterflies), as well as Baltimore local, Will Redman.

I think that the majority of composers are simply aiming for clear and accurate communication through musical notation that will result in a performance that sounds similar to the music they hear in their imaginations. Obviously what that unrealized imaginary music is like, including how much detail it holds, also varies from individual to individual. Some strive for 100% accuracy, maybe others are comfortable with 60%, and some, as in the case of improvisation-heavy works, might have relatively few preconceptions about the sonic outcome. Kyle Gann has some opinions on notation issues, which are important reading for every composer (and a great read in general) whether or not you agree with the ideas presented.

My professor friend is also doing some fantastic exercises with the students, in which they pair up and one has to figure out how to communicate a sound—using any sort of “notation” they can come up with—for the other student to produce, like the sound of a train whistle, or waves crashing on rocks. It’s like musical Pictionary! I want to sit in on this class.

Sometimes, even the clearest and most detailed score doesn’t relay absolutely everything, and that’s when the phone comes in handy:

“Hey! So, this fast section at the end of your piece? We’re not totally sure how you want it to be played. Can you give us some more info?”

Being able to talk with the composer (again, depending on the composer) can be a blessing and/or a curse of new music!