No Crystal Balls, Ever
NewMusicBox
Written By

No Crystal Balls, Ever 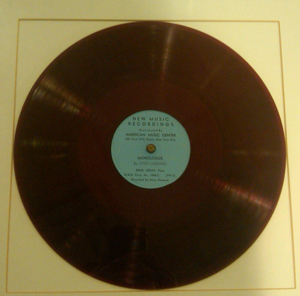 Quick, someone mail this to Spotify’s CEO!

When people ask me to describe what new music sounds like, I often say that I have no idea and that’s precisely why it is interesting. While such a stance makes it difficult to market new music (since marketing is usually predicated on fulfilling expectations), never quite knowing what you are about to hear is what keeps new music from ever being a routine or a nostalgia trip. In fact, not knowing precisely what it will be allows for an infinite range of individual creativity and expression. The minute you can come up with a list of things that new music is and a list of things that it isn’t, especially in terms of what it should sound like, you circumscribe its possibilities and, in so doing, it ceases being new.

The same is true with the future. I am thrilled that I don’t know exactly everything that is going to happen tomorrow or even later today. That’s why life is exciting. Yet these days so many people feel compelled to tell all of us exactly what is going to happen even further into the future than later today or tomorrow—more like five or ten years and beyond, especially folks involved in technology-based industries. And since we are so in love with all things technological these days and are all so afraid of being left behind in the dustbin of history, we’re often willing to buy into such messages lock, stock, and barrel.

It makes me feel old to type this, but this attitude is an almost 180 degree change in perspective from when I was growing up, and I’m only in my 40s. I was a little kid when anti-corporation types kept correcting everybody when they used the company name Xerox as a verb, claiming that to make the action of a machine Xerox produced in larger quantities than anyone else into a standard English language verb would be giving a large corporation too much power over our lives. But nowadays the brand names of at least one highly successful technology company’s products have become the de facto words for the services they render with very little questioning. And when folks complain about such usage they are frequently dismissed as Luddites. It’s ironic considering this same company’s extremely prominent global advertising claim that it inspires us to “think different”; rather, it seems to have engendered a scary conformity.

I remember conversations I was part of only a decade ago debating Ray Kurzweil’s claims that we were in a process of gradually moving beyond our carbon-based life form limitations and heading to an era where our minds would be “alive” eternally as a result of fusing with machines like the Borg in Star Trek: The Next Generation. Lots of folks thought what he was saying was—aside from being utterly terrifying—somewhat preposterous. Yet if he made the same claims nowadays in a technology-based publication, I’d venture to say that he’d probably be taken far more seriously.

As an editor for a web-based publication for over a dozen years at this point, it might seem strange for me to be voicing all this technological skepticism. But what we must never forget is that technology, in order to advance and to ultimately benefit our lives, must also not become something predictable, and one approach should never be allowed to sweep all the other alternatives under a rug. I was delighted the other day to come across the following quote from Daniel Ek, the founder and CEO of Spotify, on—of all places—the CNN website:

“I probably shouldn’t even admit this […] I’ve started becoming a bit of a vinyl buff so I actually listen to vinyl. There is something warm, and I just really enjoy vinyl. So I tend to buy a lot of vinyl records. I like it for the artwork but also for the warmness in sound.”

Things that are truly new, as so much new music already teaches us, often include an embrace of older things. And newness for newness sake gets old pretty quickly. Once again, new music can serve as a model metaphor for how to live one’s life.