Recently, the Atlas Theater concluded its first season of its New Music series, as curated by Armando Bayolo, and announced plans for their 2102–13 season. 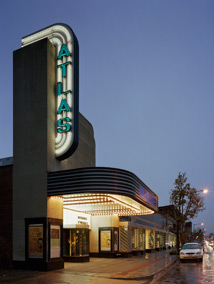 I’ve always empathized with underdog cities. I’ve resided in Second Cities for nearly all of my adult life, including Chicago (the official Second City), Philadelphia (which often feels like New York’s small stepbrother), and now Baltimore. Whenever non-locals refer to Baltimore, it’s often as part of the Baltimore/Washington metropolitan area, but to these same people Washington, D.C. is simply the Capital or the Beltway. While Washington might boast the better museums (with the notable exception of Baltimore’s much treasured American Visionary Art Museum), a wider variety of restaurants, and greater notoriety in general, until recently Baltimore reigned as the undisputed regional champion of experimental music.

Even though Washington, D.C. could claim excellent ensembles like the Verge Ensemble and nationally recognized venues like the Kennedy Center, the city lacked good medium-sized venues committed to presenting experimental sounds. Without such homes, it was impossible to seed the grassroots development that would allow for a local scene to develop beyond this upper layer of excellence. Meanwhile, for years organizations like Mobtown Modern and the Evolution Music Series have been taking advantage of Baltimore’s wealth of welcoming venues to reach out to the audiences steeped in the traditions of embracing the unusual, embodied by local legends like John Waters and Frank Zappa. I could rest easily knowing that Baltimore’s new music scene far outstripped that of our larger neighbors to the south.

Recently, the Atlas Theater concluded the first season of its New Music series, as curated by Armando Bayolo, and announced plans for their 2012–13 season. In the first year of this new concert series, the Atlas hosted such luminaries as ICE, Kathleen Supove, D.J. Sparr, and the Janus Trio, while continuing to bring all types of experimental music and art together for the third annual Intersections Festival. Next year their offerings will expand to include visits from So Percussion, Newspeak, Prism Saxophone Quartet, Maya Beiser, and Cornelius Dufallo, local favorites Pictures on Silence, and performances by their ensemble-in-residence, the Great Noise Ensemble.

This past season, I was able to attend three of the Atlas New Music series concerts: two as an audience member and one as a performer. Each presentation was hosted in the 262-seat Lang Theater, which features a proscenium stage that allows the audience to fan out around the musicians in a configuration that’s very wide and shallow so that every seat is in close proximity to the performers. The theater boasts acoustics that are very true and dry, and that project even the smallest sounds from the stage to all corners of the hall. The overall effect created by this space is an intimate feel that is excellent for chamber music, that allows for ample communication between performers and audiences, and for smaller crowds to provide a great deal of energy.

Last week’s visit by the Deviant Septet was a good example of what one can expect from performances on this series. Configured in the instrumentation of Stravinsky’s L’Histoire du soldat, this new ensemble features some of the best new music performers around, veterans of such renowned groups as Alarm Will Sound and Signal. On this concert, they presented only two works: Histories, a collaboration between the ensemble and the composer collective Sleeping Giant, and The Rake, a “hip-hopera” by ensemble member Brad Balliett and Elliot Cole.

The performances were first-rate throughout. As one would expect from an all-star group like this, the individual players projected improbably complicated lines with ease and conveyed both usual and unusual instrumental sounds with conviction. Even more heartening was the cohesion they displayed in performance, a quality that could not be assumed from a relatively new and relatively large group performing densely constructed music without a conductor. While all the composers utilized the ensemble well in order to convey a variety of effects and affects, a personal favorite moment was the section of Histories penned by Christopher Ceronne. In this movement, the wind players exited the stage and dispersed in order to surround the audience literally with gestures that grew organically from breath sounds enveloping us like waves into grandly undulating chords, while accompanying lovely vibraphone chords and sparse string effects developed unpredictably and satisfyingly.

With such a promising season finale, I am very much looking forward to Atlas’ 2012–13 offerings. They are proving to be a very welcome addition to the region’s new music scene.