What is New Music? Is it different from contemporary music? What about modern music? Is it related to modernity? Why music at all? I am quite sure that these are questions that many contemporary music practitioners ask themselves on a regular basis. That said, finding concrete answers may be difficult due to the overwhelming complexity of the topics at hand. In addition, many of us have to teach, compose, and perform incessantly in order to earn a decent living wage, which may not leave much time to reflect upon these ideas.

In this series of essays, I would like to provide concise answers to some of the questions above. (Most of the thoughts that I will be sharing here are expressed in detail in my dissertation, which can be downloaded from my website.) Despite the fact that I arrived at these notions after several years of research, I would like to stress that my answers are preliminary and that, in no way, am I attempting to present them as conclusive. In fact, I would like to think that some of the ideas below may trigger a much greater conversation, which hopefully will enrich our understanding of the music we make in connection with our surrounding reality.

In the modern era, humanity became an active participant in the construction of the world.

I would like to open this first post by defining modernity—an exceedingly laborious task but a good place to start, as I am sure the reader will gradually recognize. Much has been written about modernity, by a number of individuals who have spent their lives studying this phenomenon and its ramifications. I am thinking of Theodor W. Adorno, Sadik Jalal al-‘Azm, Hannah Arendt, Simone de Beauvoir, Judith Butler, Frantz Fanon, Michel Foucault, bell hooks, and a long list of other influential intellectuals from across the globe. I would like to provide three different definitions of modernity that I find rather fitting. The first one was written by Art Berman:

A new form of human self-consciousness is to intervene in history, not only as a mode of awareness, but as a mode of power. Human rationality will predominate, subordinating irrationality, custom and superstition, with the efficacy to plan for and attain progressive improvement in all social institutions through the free exercise of will.[1]

The second definition is by Jürgen Habermas, who writes:

With a different content in each case, the expression ‘modernity’ repeatedly articulates the consciousness of an era that refers back to the past of classical antiquity precisely in order to comprehend itself as the result of a transition from the old to the new. This is not merely true for the Renaissance, with which the ‘modern age’ begins for us; people also considered themselves as ‘modern’ in the age of Charlemagne, in the twelfth century, and in the Enlightenment—in short, whenever the consciousness of a new era developed in Europe through a renewed relationship to classical antiquity.[2]

The third definition can be found in Nick Srnicek and Alex Williams’s recent book on post-capitalist alternatives, Inventing the Future:

[Modernity] can refer to a chronological period, typically filtered through European history with a variety of events having been posited as its origin: the Renaissance, the Enlightenment, the French Revolution, the Industrial Revolution. For others, modernity is defined by a distinct set of practices and institutions: widespread bureaucratization, a basic framework of liberal democracy, the differentiation of social functions, the colonization of the non-European world, and the expansion of capitalist social relations.[3]

What these definitions seem to have in common is the underlying conviction that, in the modern era, humanity became an active participant in the construction of the world. “Modern” humans became conscious subjects and built societies according to their needs. Of course, the modern world has many facets, some of them conflicting: Emma Goldman’s modernity is different from Joseph Stalin’s; Angela Davis’s view of progress is antipodal to Alan Greenspan’s. Yet, these four individuals share the conviction that humanity is in charge of the development of history. Modernity is not necessarily an egalitarian and democratic endeavor, but rather seems to emerge as a product of 19th-century industrialization and the accompanying exponential growth of technological means. In this regard, it is difficult to imagine modernity without capitalism.

At this point, I hope the reader will bear with me if I provide my own definition of the term. In my view, modernity is the ideological product of an era in which significant scientific and technological advancements successively led a notable portion of humanity (certainly not everyone) to have greater access to some degree of welfare and basic living comfort. Consequently, this betterment of the material conditions may have been partially responsible for the collective behavioral transformation that caused us to believe in and act upon the notion that we humans do indeed have the power to shape our own future. 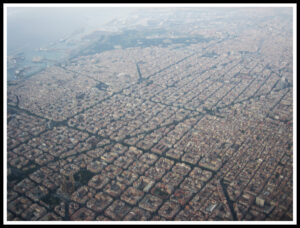 The district of the Eixample in Barcelona. Photo by alhzeia via Flickr

Modernity can be expressed in many forms. It may look like Nonoalco Tlatelolco, Mario Pani’s huge apartment complex built in Mexico City in the 1960s, which had its own schools, hospitals, and other public services. It may also take the form of the Eixample, a district of Barcelona made into a grid pattern of streets and avenues, which urban planner Ildefons Cerdà designed in the late 19th century. Modernity is also Taylorism, efficient productivity, and the exploitation of workers. Or, it can be expressed in the Russian proletarian revolution and other actions that demonstrate social consciousness. In fact, it is this contradictory facet that interests me the most about modernity: while technical advancements have improved the living conditions of many, it is equally true that oppression has taken new forms, different from those that we associate with earlier times. At its core, modernity carries a capacity for self-critique: it is a paradoxical phenomenon that acknowledges the possibility of human progress while it simultaneously scrutinizes the means that lead to this very progress. In this regard, modernity advances a locus whereby humans can seek emancipation by committing themselves to some ideal of freedom. This is what we learned from Freud, Marx, and Nietzsche—or, what Paul Ricœur called l’école du soupçon [the school of suspicion].

Any type of music, like any type of art, is a product of the social relations that evolve from a given set of material conditions.

How is music related to this discussion? Any type of music, like any type of art, is a product of the social relations that evolve from a given set of material conditions. In the present situation, music is a product of neoliberal capitalism and, therefore, it is susceptible to becoming a commodity exchangeable in the market. This is the case for the vast majority of music that is created today: from Beyoncé and Kanye West to Mathias Spahlinger and David Lang. Regardless of genre and other internal aesthetic qualities, as long as music is supplied in exchange for economic capital (through record sales, concert tickets, or commission fees) musicians participate in the logic of capitalism. The question is whether this is perceived as an issue that needs to be addressed or, on the contrary, if it is an inevitable consequence that cannot be tackled through the music itself. My contention is that New Music is an aesthetic project that ultimately demands the illusion of alternative material conditions, perhaps fairer than the ones we presently endure or even more dystopian in order to warn us of where society should never go. For this reason, New Music is at the very least obliged to inquire into its own material status.

In my next post, I will attempt to define New Music in contrast to the term “contemporary music,” which does not necessarily assume the ideological imperatives associated with New Music. 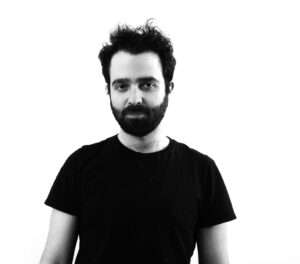 The music of Joan Arnau Pàmies (IPA: [d͡ʒu’ɑnəɾ’nɑu’pɑmiəs]) has been performed internationally by new music specialists such as the Arditti and JACK Quartets, Fonema Consort, Ensemble Dal Niente, ensemble recherche, and Vertixe Sonora Ensemble. Pàmies’s writings have been published by the University of Huddersfield Press, NewMusicBox, Open Space Magazine, and Sul Ponticello, among others. He holds degrees from Northwestern University and the New England Conservatory of Music.

3. Nick Srnicek and Alex Williams, Inventing the Future: Postcapitalism and a World Without Work (London: Verso, 2015), 71.