Boston Modern Orchestra Project never seems to run out of juice. It fills a need. It mounts concerts that manage to be both one-stop shopping for the merely curious and essential for professionals. The “modern” in the name has always been as much stylistic as calendrical, but its concert at Jordan Hall on January 17 was aggressively new: three world premieres in wildly disparate styles. 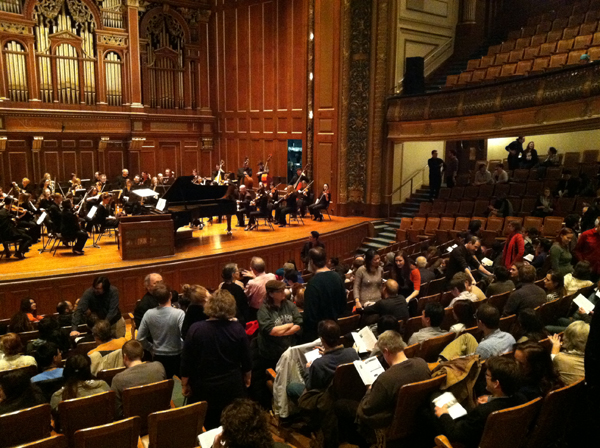 A BMOP intermission, January 17, 2014: players get ready to work; composers work the room.

It has become commonplace to bash the symphony orchestra. All together now: it’s impractical, old-fashioned, a relic, a museum, a bastion of canonic conservatism, a hangover from long-gone eras and aesthetics. We know the drill.
We want it, though. The sonic luxury, the grandeur, the spectacle—we want it bad. I know this to be true because the Boston Modern Orchestra Project never seems to run out of juice. It fills a need. It mounts concerts that manage to be both one-stop shopping for the merely curious and essential for professionals. (As I’ve said before, BMOP intermissions feature some of the most vigorous new-music networking in town). Put enough people on stage, and any new-music concert becomes an event. BMOP and conductor Gil Rose have been leveraging that fact since 1996.

The “modern” in the name has always been as much stylistic as calendrical (BMOP’s opening concert this season, for instance, was a concert performance of Virgil Thomson’s Four Saints in Three Acts), but its concert at Jordan Hall on January 17 was aggressively new: three world premieres in wildly disparate styles. The curtain-raiser, Elena Ruehr’s Summer Days, continued a long relationship—Ruehr, based at MIT, was BMOP’s first composer-in-residence. Inspired by a Georgia O’Keefe painting (the third O’Keefe-inspired piece Ruehr has written), Summer Days was all mood and activity. The main formal signpost was a brief, brassy fanfare ritornello; the melodic ideas were mostly short and compact, circling around small groups of pitches. The fabric of the piece is repetition and sequence. (The one longer theme, a sustained excursion for the strings, was largely based on a simple rising scale.) Ruehr’s orchestration is Bruckner-like in its heavy outlines: families of instruments play together and stay together, juxtaposed more than mingled. The harmonic color might be characterized as exotically diatonic, bright but modal. But the emphasis is more on transformation and layering. Summer Days felt something like a long, excursively episodic development section, the goal subsumed into the getting there.

About the only thing Ken Ueno’s Hapax Legomenon had in common with Ruehr’s piece was a similar journey-like feel, and even that seemed to be radically altered, forward motion rejected in favor of a furiously concentrated focus on each present moment. Like a lot of Ueno’s music, the spur was a singular technique—in this case, the two-bow cello stylings of Frances-Marie Uitti, the quadruple-stop possibilities of which Ueno fashioned into ever-more dilated harmonies. (The title, the old scholarly term for any word that appears but once in the corpus, was Ueno’s own self-deprecating reference to his fondness for writing for such only-person-in-the-world-who-can-play-it performers.) One of Ueno’s talents is for taking what might seem gimmicks—not just Uitti’s unusual approach, in this case, but also a bunch of hoary extended techniques in the orchestra, key-clicks, breath sounds, having the players sing, etc.—and confidently turning them to new and convincing ends. Hapax Legomenon seemed to pass in heightened slow-motion, every note and texture a drawn-out respiration, every idea daringly situated in some musical gray area, between silence and sound, noise and tone, different temperaments and timeframes. The ending—a long cadenza which featured Uitti creeping up the fingerboard into a distant, shortwave squeal of high natural harmonics—was breathtaking.
David Rakowski’s Piano Concerto No. 2 was, on the surface, a much more conventional piece, and purposefully so—from its lushly chordal, moto perpetuo, étude-ish opening, the reference point seemed to be the highly-stylized, fashionably syncopated Jazz Age piano concerto. But that was a springboard for Rakowski’s brand of subtle mischief. That opening, for starters, ended up a lot more off-balance, the steady rhythmic stream sliced and diced into all manner of speed bumps. The second theme—the place, say, where Gershwin liked to let the piano take over in a wash of rubato—turned into an inside-the-piano exercise, plucked and strummed punctuation to a play of intervals in the orchestra, sixths and sevenths (and others) at harmonic sixes and sevens with each other. Throughout, Rakowski kept dropping in little bits of delicious orchestration. (Note to self: extended doubling of piano and motor-on vibraphone is an idea worth stealing.)

The second movement—conceived as an elegy for Milton Babbitt, one of Rakowski’s teachers—commenced with some more felicitious instrumentation: a stop-and-go duet between the vibraphone and marimba, joined by double-bass pizzicato, that turned into intermittent obstacles in a stream of English horn (then clarinet) cantilena. The echo of Ravel’s G-major concerto was strong, except that the piano filigree here roped the rest of the orchestra into an unexpected faster tempo. The finale had an expected fast and busy character, but ended up being more of a hesitation-toccata, the concerto’s traditional prizefight qualities reduced to a collection of feints and stutter-step footwork, before a cadenza—which finally tipped over into straight stride piano—and a vastly-telescoped reprise of the opening movement brought the piece to a close.
Like Ueno, Rakowski was writing for a specific performer: Amy Briggs, the profoundly adroit Chicago-based pianist who has been the primary performing means of Rakowski’s encyclopedic set of piano études, the increasingly whimsical challenges of which just seem to make Briggs more adventurously game. (Much of the flavor of the concerto—the jazz colors, the soloist’s doubling on celesta at particular formal landmarks—was, according to the program notes, at Briggs’ request.) Like the études, the concerto has more than a little of Rakowski’s trickster personality. Statements and ideas are inseparable from bluffs and subterfuge, not unlike a magic trick in which the misdirection is so skillful and impressive that you don’t notice that your chosen card is never actually revealed. But the patter and the choreography glister.

I suppose, if you take the current cultural landscape as a whole, any organization for which three orchestral premieres is just another night at the office is a little out of the ordinary. But BMOP has been doing it so well and for so long that they’ve created the luxury of expecting it. BMOP’s achievement is the possibility of taking that kind of programming, and the skill and panache with which it’s performed, almost for granted. But only almost. You’d miss it if it was gone.