Symphony Hall in Boston is a temple, and proud of it, from the plaster casts of Greek and Roman statuary keeping classical watch to the cold-comfort design of the seats. But, like many temples, Symphony Hall is now part sacred space, part museum, harboring gods both potent and obsolete. At its best, John Harbison’s Symphony No. 6, the Boston Symphony Orchestra’s only world premiere this season, also captured something of that dance between the spark of immediacy and the accumulation of history.

Allow me to walk between the tall pillars
And find the beginning of one vine leaf there,
Though I arrive too late for the last spring

Symphony Hall in Boston is a temple, and proud of it, from the plaster casts of Greek and Roman statuary keeping classical watch to the cold-comfort design of the seats. But, like many temples, Symphony Hall is now part sacred space, part museum, harboring gods both potent and obsolete. At its best, John Harbison’s Symphony No. 6, the Boston Symphony Orchestra’s only world premiere this season, also captured something of that dance between the spark of immediacy and the accumulation of history. 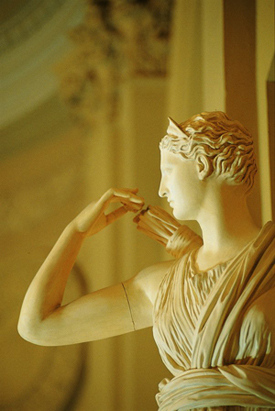 The performances last week (I went Saturday night, January 14) were conducted by David Zinman, one-time music director in Baltimore, now settled in Zurich, but there was another conductor palpably absent: James Levine, the symphony’s dedicatee, and, as Harbison indicated in interviews, in many ways its subject. Levine has always been one of Harbison’s champions; the symphony was commissioned on his watch (as was Harbison’s 5th) and he would have conducted it had not health problems forced him from the BSO podium last year. But apart from its portrait of Levine, Harbison’s 6th also seems to be a reflection on the symphony itself, the form, and the idea of writing one, adding to a considerable, even burdensome repertoire.

It was the culmination of a two-season survey of Harbison’s symphonies. “The hardest thing to win back for the big genres of symphony and string quartet,” Harbison wrote in the program book, “is some kind of naturalness, some escape from the self-consciousness of our artistic time.” But consciousness of time was present in this Sixth from the start. It opened with a setting of James Wright’s poem “Entering the Temple in Nîmes” for mezzo-soprano (Paula Murrihy, in rich, sharp-faceted voice). The Temple of Diana becomes the focal point for a multitude of eras and traditions, as Wright, from his modern vantage, regards the “young Romans”:

Though they learned her name from the dark rock,
Among bearded Greeks,
It was here in the South of Gaul they found her true
To her own solitude.

That’s a lot of transfers on one ticket. Harbison’s setting oriented the traffic around the voice, starting with a leaping, unaccompanied mezzo line; the leap became the seed of much of the symphony’s motivic grillwork. The voice turned more recitative-like as the orchestra moved in, the focus shifting to the architecture of the temple. The shift was punctuated by an interloper, a cimbalom, whose jangle Harbison would return to throughout the symphony, rounding off passages while, sonically, remaining outside them.

The second movement was built around a long string line. The line itself, winding, full of angular leaps and variable speeds, was almost reminiscent of Elliott Carter, but the musical habitat was more traditionally Mahlerian—where Carter might playfully interrupt and jump-cut his way along such a wire, Harbison gradually added orchestral and harmonic mass in a way that started to feel dutiful, like a debater affirming the possibility of the Great American Symphony with ever more orotund rhetoric.

The last two movements, though, struck out into intriguing backcountry. Both started off with material strongly echoing (consciously or subconsciously, I don’t know) the one inarguably Great American Symphony, Copland’s Third, but both played off standard ideas of symphonic greatness as much as they pursued them. The scherzo-like third movement began by carving a grid of triplets into all manner of off-kilter syncopation, but in the middle, things got seriously interesting, contrasting implications coexisting—straight rhythms vs. swing, busy contrapuntal chatter vs. glacial background-radiation harmonies—as Harbison divided the ensemble into ever-more-unorthodox chamber combinations. (A sudden garnish of stately harmonics from two solo violas—later reprised by two cellos—was particularly bewitching, like a shape-note echo.)

The fourth movement was more imposing, the sound in large blocks. (Much of it was in a particular vein that Harbison has mined before: imagine isolating the tallest, most dissonant harmonies from a big band chart and then quilting them together.) But here, too, the music seemed to surprise even itself. At one point, the granitic procession shuddered to a stop, suddenly seeming to backtrack, retracing its steps, looking for the path. The ending, too, was more an abreaction than a catharsis, ruminating to a halt rather than emphatically sending itself off; the cimbalom came back, but as part of a final inventory, the music taking one last look around the house before closing the door.

Harbison is, on the one hand, a composer of symphonies with a technique to match: the bend-but-don’t-break tonality, the chain-of-custody working out of ideas, the cultivation of a monumental austerity in his orchestration. But he also seemed, in this symphony, to be more comfortable weighing musical options than flat-out asserting them. Those points in the symphony that seemed to spin off into a kind of considered ambivalence were not only the most engaging, but also cast the rest of the piece in a more fertile light. Maybe it was a reflection of the overwhelming sense of unfinished business surrounding Levine’s tenure and departure, or maybe of something in the composer’s own temperament, but Harbison’s Sixth was hard to put a finger on in a most interesting way.

Zinman, throughout the concert, projected structure more than mood. Having suffered through enough concerts where that calculus was inverted, I can’t say it was a bad thing; still, there was a cut-and-dried sense to the whole evening. Carl Maria von Weber’s Euryanthe Overture was bracing and chipper. Beethoven’s Piano Concerto No. 1, with pianist Leif Ove Andsnes, was similarly clean and straightforward; Andsnes’s firm clarity of touch was commendable, and it was nice to hear a Beethoven interpretation unburdened with a need to foreshadow the entire Romantic era, but the overall temperature stayed low.

The performance of the Harbison was solid and admirable, but the ghost at the banquet loomed; Levine would probably have stretched those ambiguities out to wondrous effect. The concert closed with Richard Strauss’s Till Eulenspiegel’s Merry Pranks, where Zinman’s direct approach yielded the fewest dividends, countless delicious details of the piece subsumed. The ensemble and virtuosity were impeccable, but the pranks themselves had the slapstick energy of a news report.

The previous week’s BSO concerts were to have been the subscription series coming-out party for conductor Andris Nelsons, the odds-on favorite to take over Levine’s music directorship. Nelsons instead begged off to stay at home with his wife and newborn daughter, and BSO Assistant Conductor Marcelo Lehninger stepped in to lead the concerts. (I heard the January 7 performance.)

The original program largely remained, though, including the American premiere of Mark-Anthony Turnage’s From the Wreckage, a trumpet concerto written for Håkan Hardenberger, who was the soloist for these performances. (Nelsons started out as a trumpeter as well, hence the programming.) Why it took seven years for From the Wreckage to make it across the Atlantic, I’m not sure—the piece turned out to be a fine entertainment.

Turnage’s jazz influences are apparent, but it’s the space between influence and appropriation where the action really happens in his music. At its best, Turnage’s music is more like a still life of jazz, pinned and painted with full memento mori overtones, decay and spoil rendered with exuberant brushwork. From the Wreckage, jump-started by string harmonics and Hardenberger’s het-up flugelhorn, unfolded in waves of noir alternatives: sultry and suspicious, then grim, brittle, and Brechtian, then a fractious, Rite of Spring-style assault. Even the piece’s gimmicks paid off, whether it was having Hardenberger move from flugelhorn to trumpet to piccolo trumpet over the course of the concerto, or scattering four percussionists among the orchestra in order to pass around clockwork ticks, a surround-sound time bomb. From the Wreckage was rich, dark fun.

Lehninger (who stepped in at the last minute to conduct the premiere of Harrison Birtwistle’s Violin Concerto last season) was awfully impressive, though he started slow: the opener—Haydn’s Symphony No. 88, swapped in for the originally scheduled No. 90—was secure but one-dimensional, full of the sort of high-contrast subito-this-and-that engendered by Haydn’s reputation for humor, the elbows to the ribs outnumbering the actual witticisms. But the rest of the concert was superb. The Turnage was bold and lush. And the finale, a stop-pulling tour of Strauss’s Also Sprach Zarathustra, was terrific, cogently argued, sweepingly grand, big-boned and brash.

I had a great time, but, then again, I am an incurable Richard Strauss fan. But it was the sort of performance that recalled how far-out Strauss’s music really was and is, a facet dulled by his post-Schoenberg last-Romantic reputation, his political dealings, and, perhaps, his personal diffidence. Lehninger and the BSO, though, got it, how confrontational, how unapologetic, how punk the tone poems are, and how good performances of them depend on pushing those aspects to the fore, wallowing in the attitude. Put it this way: it is a credit to conductor and orchestra that those in the audience who aren’t Richard Strauss fans must have been absolutely miserable.

That might be wishful thinking, but this season at the BSO, one has had to take any such line-in-the-sand musical verve where one can get it; the spark of novelty has been in short supply. Living composers can be counted on one hand; the only piece left on the slate that Boston hasn’t already heard is Esa-Pekka Salonen’s Violin Concerto (scheduled to be conducted by him in April). It’s been a long time since the BSO was a hothouse of new music, and whatever energy James Levine was able to inject in that regard is petering out. The temple is feeling ancient.