New England's Prospect: “The harpsdischord shall be theirs for ollaves”
NewMusicBox
Written By

New England’s Prospect: “The harpsdischord shall be theirs for ollaves”

Martin Pearlman’s Finnegans Wake: An Operoar did right by James Joyce’s garrulous tumble of language. What success the work produced could be traced to two fundamental decisions: not cutting the text (the piece sets the novel’s first seven pages in whole), and opting for a reciting actor (Adam Harvey) rather than singers.

It was the beer, in the end. And Schrödinger. But for much of the time, Martin Pearlman’s Finnegans Wake: An Operoar did right by James Joyce’s garrulous tumble of language. The Sunday night premiere was under the nominally anachronistic auspices of Boston Baroque—the inaugural concert of the group’s new chamber series—but the rationales were both obvious (Pearlman is Boston Baroque’s music director) and, maybe, a little meta-historical, the whole early music movement being, after all, a product of modernity. And the opening chapter of Finnegans Wake is nothing if not historically informed, a dense, hallucinatory tour of legend and lore, the centuries peeled back to set the stage for the fall of the original Finnegan, Finn McCool, and the wake which proves the unlikely creation act of the novel’s dreamlike narrative.

What success the work produced could be traced to two fundamental decisions: not cutting the text (the piece—as it stands, Pearlman reserving the Joycean prerogative of calling it a “work in progress”—sets the novel’s first seven pages in whole), and opting for a reciting actor (Adam Harvey) rather than singers. The words could flow unimpeded, Pearlman’s rhythmic setting natural and fluent, Harvey’s delivery (even with the handicap of an American accent) confident and—no small feat—remarkably off-book for a premiere. The music, for the most part, provided constantly shifting scenery. The ensemble was of the new music ilk—flute, clarinet, violin, viola, double bass, piano, and a fair collection of percussion—and the musical accent that of post-serialism, rhythmically and contrapuntally busy and multivalent, but harmonically mediated, not averse to venturing forth chromatically (occasionally rising to a pitch reminiscent of Joyce’s “duodisimally profusive plethora of ululation”) but always staying within earshot of a tonal center or resolution. Many of the motives alternated between chromatic, “atonal” versions and more triadically contoured twins. 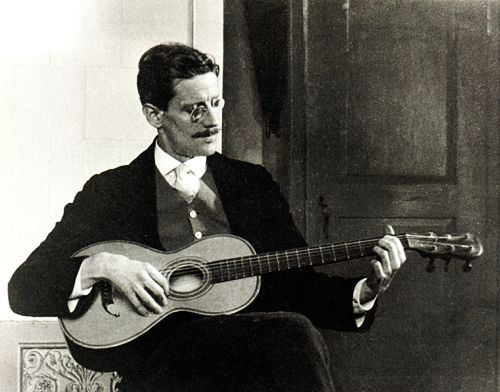 Joyce playing the guitar in Trieste, 1915.

Pearlman clearly loves the song-like nature of Joyce’s language (Joyce was a singer, after all), and his delineation of it was optimized towards bringing out its capacity for rhyme and dance-like scansion. (At times, as in Harvey’s snappy delivery of lines like “the strupithump of his ville’s indigenous romekeepers, homesweepers, domecreepers, thurum and thurum in fancymud murumd,” it was almost as if to make a case for Joyce as a kind of proto-rapper.) And Pearlman was attentive to the broad symmetries in the prose’s structure: the rolling tolling of historical events, with the musicians giving fragmentary cues for Harvey to respond to, was mirrored in the telling of Finn’s fall, Harvey now the one spurring commentary from the instruments, interpreted portents now become portentous gossip. The tallying of Finn’s various incarnations, with the music providing a mickey-moused soundtrack keyed to the text, was transformed into the din at the wake, the speech rhythms herded by the hints of Irish song burbling up through the ensemble. The opening glimpse of the River Liffey, a wash of cymbal and a heavy jig from the violin, returned at the end, Anna’s “wivvy and wavy” hair (borrowed from page 28 for a coda) now elided with the river’s current. (The perception of all these structures was vastly aided by the piece being performed twice.)

Still, it was those Irish songs that hinted at the barrier Pearlman’s setting—along with all settings of Finnegans Wake—eventually ran up against. Pearlman relished the chance for the ensemble to provide a gloss to the text, the songs Joyce hinted at or parodied suddenly poking out of the musical texture. But the results were more of an Ivesian hubbub than Joyce’s rapid-fire but precisely aimed allusive vectors. The problem, of course, being that music goes, inexorably, in real time—on the page, Joyce’s references, however passing (and they almost all are in passing), can still hit their marks, clear and momentarily in the spotlight; but layered into music, they were perceived only peripherally. By the time one had processed a musical quotation, the next one had already gone by. (And some remained unprocessed—even on second hearing, and primed by Pearlman’s mention of it during a question-and-answer interlude, I still missed a Beethoven quote accompanying the “dusty fidelios” at the wake.)

It’s the eternal trade-off of trying to musicalize Finnegans Wake: you can capture the rhythm of the language or the depth of field of the allusive web, but not (at least in my experience) both—because the allusive web is as much visual as aural. You can see it in the beer, the cask meant to accompany Finn, pharaoh-like, on his journey to the world of the dead, the “barrowload of guenesis hoer his head” to match the “bockalips of finisky fore his feet.” It’s one of the book’s more famous portmanteau-puns, the barrel of Guinness made to bookend the whisky in a Genesis-Apocalypse biblical whole, but also containing within it the spark that will fuel the book: not only genesis (after all, what better image for creating a universe than brewing it) but also genius, the creative urge to tell the story. And, if you’re a close reader of Finnegans Wake, you note that this is already the book’s second version of the pun, after the initial introduction of the title character, who, in a parenthetical digression, we learn

sternely struxk his tete in a tub for to watsch the future of his fates but ere he swiftly stook it out again, by the might of moses, the very water was eviparated and all the guenneses had met their exodus so that ought to show you what a pentschanjeuchy chap he was!

And then you can dig deeper and find out that the Guinnesses did meet their exodus in a way particular to Joyce, Joyce’s father having been secretary to the Liberal Party whose candidate unseated Sir Arthur Guinness for a seat in the Irish parliament, Arthur’s father, Sir Benjamin Guinness, Lord Mayor of Dublin, to be likened in Finnegans Wake to Noah, Noah who went on the first biblically recorded drunken spree, a spree recorded in Genesis, a spree that could very well have been fueled by a barrel-load of Guinness. It’s the sort of referential rabbit-hole that infuriates the book’s detractors and endears it to its adherents.

In a way that has eluded every musical setting of it I’ve yet heard, Finnegans Wake is a book of quantum superposition. Joyce, in fact, wrote it at the same time quantum physics was coming into its own, at the same time as De Broglie’s equation, Schrödinger’s wave function, the Copenhagen interpretation. It was Schrödinger who came up with the most famous analogy for the superposition that resulted from a probabilistic interpretation of his wave function, his cat, suspended between the states of life and death until an observation forces it into one state or another. But Finnegans Wake might be an even better illustration of the concept, every one of Joyce’s half-inherited, half-invented words encompassing an abundance of states simultaneously, all the interpretations and allusions and hints able to hover, superimposed, for as long as the reader wants. For all the respect and entertainment value Pearlman brought to his setting, in the end, the performance, the accompaniment, the necessity of forward motion inevitably collapsed all those functions, the multitudes within each of Joyce’s redolent mutations reduced to whatever wave was most aurally apparent.

Still, the one-state-out-of-many that Pearlman chose was almost always an agreeable one; Finnegans Wake: An Operoar might hem the text in, but it does so in a way that still defers to it, puts it in the foreground, and celebrates it. It has to be some sort of testimonial that, after hearing the piece, quibbles and all, I nonetheless went home and started re-reading.