New England's Prospect: The Gift of Sound and Vision

Multimedia is a provocative tool to combat conformity, but hardly a foolproof one. Filmmaker/sound artist Ben Russell and musician Robert A. A. Lowe (a.k.a. Lichens) presented a joint show at Cambridge’s Middlesex Lounge, and that tension in the multimedia concept proved to be a running theme. 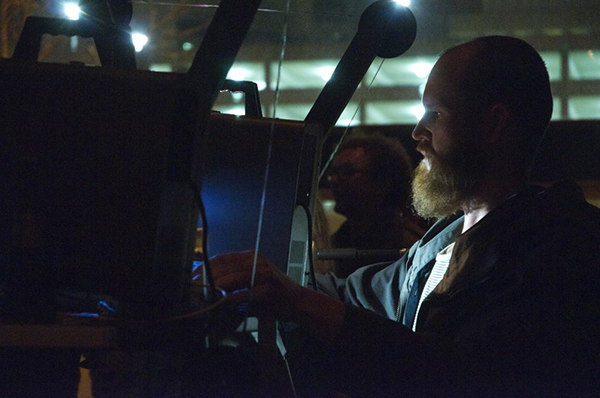 Ben Russell and his machines; at the Middlesex Lounge, Cambridge, MA, March 25, 2014. Photo by Susanna Bolle.

In 1941, anthropologist Margaret Mead, then a member of a group called the Committee for National Morale, wrote a memorandum about a proposed exhibit on the theme of democracy to be mounted at the Museum of Modern Art in New York. Having witnessed the methods of Hitler in the long crescendo into World War II, Mead and her colleagues were in search of a format that would (Mead wrote) provide a framework

to free the individual citizen from his fear of being moved, to restore to the individual his belief that HE CAN MAKE CHOICES, HE IS NOT JUST A HELPLESS INSTRUMENT ON WHICH THE PROPAGANDIST PLAYS WHATEVER TUNE HE WISHES[.]

The solution—developed in large part by designers and artists associated with the Bauhaus school, émigrés from Nazi Germany—was what today we would call a multimedia experience. It was a striking innovation, intended to promote a radical idea of democratic diversity: choosing their own path of perception through a multimedia environment, a viewer could absorb the overarching message of an exhibit while still maintaining a sense of agency that would work against fascist tendencies. “Ideally,” writes Fred Turner in his (highly recommended) new book The Democratic Surround, visitors to such morale-boosting exhibits “would come to see themselves not simply as part of a national mass, but as individual human beings among others, united as Americans across their many differences.” Still, as Turner points out, with the coming of the Cold War, multimedia techniques were easily appropriated into a campaign to combat communism by promoting American consumerist values. By the ’60s and ’70s, the original vision of the Committee for National Morale had migrated to the counterculture. Multimedia proved a provocative tool to combat conformity, but hardly a foolproof one.
On March 25, filmmaker/sound artist Ben Russell and musician Robert A. A. Lowe (a.k.a. Lichens) presented a joint show (sponsored by the invaluable Non-Event series) at Cambridge’s Middlesex Lounge, and that tension in the multimedia concept proved to be a running theme. Both performances were, on their surfaces, multimedia experiences. But each performance, in its own way, also ended up subverting the technique.

The show was the finale of a three-day residency of sorts—the previous two nights, there had been screenings of films by Russell and Ben Rivers at the Harvard Film Archive (including Russell’s 2013 feature A Spell to Ward off the Darkness, which stars Lowe). For Tuesday’s performance, Russell again turned to film, but as an instrument as much as a medium, manipulating and mixing film loops on two 16mm projectors in real time: overlapping images, drawing one and then the other in and out of focus, waving his fingers in front of the projectors’ lenses to adjust the light intensity, even at one point removing the lens and focusing the light through a stronger, hand-held one.
This was all in the service of sound as much as sight. At first, it was just an abstract, optical sound track on the film loops, but soon into the half-hour set, Russell deployed his light-sensitive skull: a human skull, with electronic light sensors mounted in the eye sockets which control a square-wave oscillator, the volume and frequency varying with the strength of the light. Put in the path of the projectors, the skull produces a soundtrack in perfect—if unorthodox—synchronization with the visual image.
At first, the film loops were representational: an outdoor scene, a man standing up, then walking toward the camera, smiling, and donning a mask. With both projectors running the same loop, in and out of phase and focus with each other, the effect was canonic for both senses, with an added level of organic, unexpected commentary from the skull. But then Russell switched over to more abstract film fragments: simple alternations of black and white frames, triggering simpler on-off sounds from the skull, essentially an elaborate, lo-fi series of driving beats. Image and sound were united in rapid-fire, techno-like regularity, Russell introducing glitch-like effects by interrupting the projectors’ beams.
What’s interesting about both Russell’s set-up and the end result is how it functioned, intentionally or not, as a critique of the sound-plus-image multimedia idea, how it flattened the choose-your-own-adventure possibilities of multimedia back into something more like a single-channel, one-way communication. The image was the sound, the sound was the image; and the almost pummeling insistence of the performance—the stroboscopic flashing, the relentless, high-volume pulsing—left little if any room for the viewer/listener to experience it in any alternate way. What little counterpoint there was to choose turned out to be the actual machines. The projectors still carried at least their potential for propagandistic promulgation; the skull faced them from the other end of the room in macabre riposte. 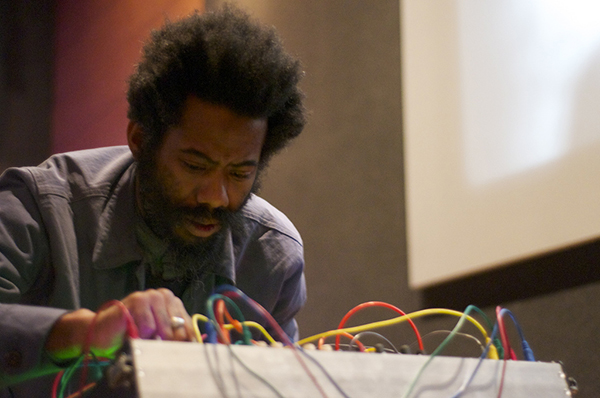 Robert A. A. Lowe prepares at the Middlesex Lounge, Cambridge, MA, March 25, 2014. Photo by Susanna Bolle.

If Russell’s critique was confrontational, Lowe’s was more hypothetical, suggesting the possibility that the diversity the old multimedia enthusiasts were after could be achieved through sound alone. Armed with nothing more than a microphone and a rack of electronics—analog synthesizer modules, filters, reverb and delay units—Lowe conjured waves of slow-spinning polyphony, singing a note, letting it loop, layering on another, and another, while a simple, gentle percussion pattern clicked away in the background.
The harmonic language was basically modal—for the first part of his 45-minute improvisation, Lowe didn’t stray much outside a single, natural minor scale—but that was just a blank canvas for shades and shifts of sound: the way a little glissando at the end of a held note turns into a rich little cluster on the other end of the reverb, the way slight shifts of intonation in the sung note can, a few seconds down the line, create the effect of a change in waveform or envelope. Of course, these sorts of maneuvers have been around as long as microphones and delay boxes, and even longer—most Renaissance composers worth their salt could wring some expressive use out of the protracted reverberation times of Gothic cathedrals. What sets Lowe’s music apart is, first of all, his sense of balance: even at the most dense, piled-up moments, every thread, every sound, every component was still clearly audible, contrasting timbres in distinct ranges. Add to that the sheer beauty of Lowe’s voice—clear, fluid, and pure—and you get some wonderfully luminous sounds.
There was a projected visual component to Lowe’s performance as well, similarly tied to the aural information: a kind of slightly less slick, more video-feedback heavy version of an iTunes visualizer. It was, perhaps, a bit of added value to make up for the fact that a guy with a microphone sitting in front of a box of wires is not all that visually dynamic, no matter how polychromatic the sound. But it was ultimately unnecessary: Lowe was creating a multitude out of singing and synthesis alone. Making himself into the instrument, he was anything but helpless, opening up the possibility of playing any tune he wished.