The idea that 21st-century new music is stylistically agnostic might be somewhere between a truism and an extrapolation, but Boston’s Equilibrium Concert Series actually comes pretty close to that ideal. 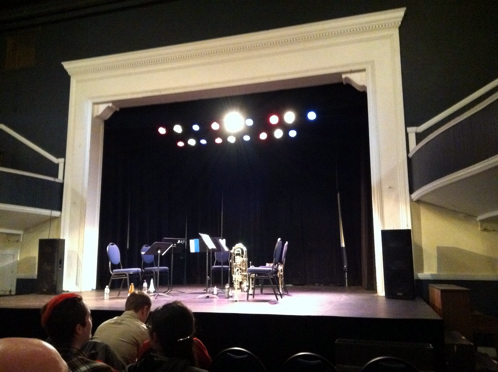 Boston’s Equilibrium Concert Series, which started in 2011, has made entire seasons—not to mention an entire new music community—out of that most alchemical of compositional tricks: establishing a connection between two ideas simply by putting them next to each other. The organization opportunistically shifts its identity between composer collective and presenter, at times putting together made-to-measure programs of premieres, at times turning over the reins to friendly performers and groups who bring in their own repertoire and connections. Instead of a unified aesthetic, they end up with a multitude of enthusiasms. The idea that 21st-century new music is stylistically agnostic might be somewhere between a truism and an extrapolation, but EQ actually comes pretty close to that ideal.

Their concert on February 21—at the Central Square YMCA Theater in Cambridge, one of the area’s more elegantly ramshackle spaces—featured Boston Modern Brass. (The group also made an appearance on EQ’s 2012-13 season.) The program was spiked with examples of the group’s spoke-by-spoke connectivity. One of the performers—trumpeter Jason Huffman—is also one of EQ’s core organizers; three others—trumpeter Jonah Kappraff, hornist Yoni Kahn, and tubist Beth McDonald—also lend their talents to the EQ Ensemble, an as-big-as-it-needs-to-be group that gathers for the more composer-centric concerts. (Trombonist Paul Fleming rounds out the quintet.) Another EQ organizer, Aaron Jay Myers, had a piece premiered on the concert, which also included a contribution from Kahn.

The rest of the program had something of a throwback feel, built around a trio of old-school modernist works combining mixed-meter angles with chunky dissonances and nervous energy. What was interesting was how much the program’s 21st-century pieces seemed to channel similar vibes; it was almost as if the sheer choice of instrumentation allowed some atavistic, brass-based form of American once-upon-a-time-new music to again express itself. Coincidental or not, it was a reminder of how much fizz is still in that style—it might be retro, but the best of it never gets old.

And the old stuff was pretty good indeed. William Mayer’s 1965 Brass Quintet was the busiest, a dense hubbub of teletype Neoclassicism. Mayer’s catalog has ranged far and wide, stylistically speaking; the Quintet is tonal, but just barely, with an efficient use of effect. (The third movement, a toccata-scherzo in which the players seem determined to sabotage any hint of heroic brass—with mutes, with fluttertongued raspberries, with speed-bump rhythmic shifts—was especially fluent in that regard.)

The music of John Huggler, who died in 1993, seems ripe for rediscovery. I was surprised to find he doesn’t even rate a Grove entry. For years a professor at UMass-Boston, he spent a couple seasons in the ’60s as that rarest of birds, the Boston Symphony Orchestra’s composer-in-residence. (One fruit of that has made it online.) Huggler’s Quintet for Brass Instruments, from 1963, was a real beauty, sinuous and austere: an opening movement that made compelling use of long tones in fast rhythms, an almost-fugue marked by stark unison passages, a “Mysterioso” wonderfully cast with a high tuba solo, a closing clutch of tight, cubist fanfares.

In between came Ralph Shapey’s marvelous grit: his Fanfares, composed in 1981, is three minutes of pure, unadulterated crunch. Shapey’s penchant for massiveness was out in full force—it’s kind of amazing how he could make the quintet sound so much bigger than it is, as if filming it from an extremely low angle—but so was his restless imagination: the clashes and clusters are refracted through all manner of mutes and voicings.

The concert opened with Counterpoint, a 2003 piece by Kahn —his first completed work, according to the program notes. It was an interesting mediation between busy modernism and easygoing post-minimalism. Its somewhat slow harmonic rhythm was translated into a density of attack: drones and pedal tones reiterated into an agitated stutter of short notes. Individual lines were overlaid with cross-traffic accents. Dissonant intervals came on a steady bed of fourths and fifths.

The one brand-new piece, Aaron Jay Myers’s FLUX, was, much of the time, an exploration of different kinds of homophony: first a series of repeated chords, then a division of the quintet into two factions (horn, trombone, and tuba in slow, moody cahoots, while the trumpets offer muted chatter), then a fluid lock-step chorale, then a return of the opening idea. (Myers’s program note linked the structure to a personal struggle and recovery; one could, in that light, hear those opening jitters transformed, lemons-to-lemonade style, into crackling positive energy behind the chorale’s cushion.)

The program’s one apparent outlier, Hans Abrahamsen’s Rundt Og Imellem (“Round and In-Between,” finished in 1976) seemed to visit from another concert, in both its European origin and its in-your-face simplicity and triadic tonality. Still, its rhythmic ideas were congenial to the program, its squared phrasing trimmed to odd numbers of beats, lending an off-kilter surrealism to its deliberate genericism. A cheery brass band marches through an Escher print; a bright fanfare drifts out of step with itself; a soft-edged legato turns more loping than lyrical. The piece makes the most of the most basic of formal contrasts, juxtaposed jump-cut style: that marching band tune interrupted by tuplet outbursts, those fanfares undercut with dark, droning pedals. Trumpet and horn pick up a triangle and bells, respectively, at the end, a pastoral touch genial and jarring at the same time. In fact, Myers’s currents and Abrahamsen’s clockwork formed a complement that, rhythmically speaking, encompassed the whole program. Where Abrahamsen’s mixed meters were subtractive, looping around faster than you might expect, Myers’s were more additive, which created its own layer of lacunae: the stop-and-go rhythms really did stop, noticeably, putting each phrase in its own frame.
Equilibrium’s mixed-meter programming gives every new music style its chance to have its say. The next few EQ concerts are like some kind of eclecticist’s fever dream: a solo glockenspiel concert from Trevor Saint; the debut concert of Trio Okho, three Boston new music percussion stars (Nick Tolle, Jeffrey Means, and Mike Williams) performing Xenakis, a new piece by Victoria Cheah, and Rick Burkhardt’s amazing Great Hymn of Thanksgiving; and a string quartet concert featuring a premiere from EQ organizer Stephanie Lubkowski alongside music by Zorn and Górecki. That’s a montage to make Eisenstein proud. Equilibrium Concert Series finds balance in variation.