New England’s Prospect: Space Is the Place
NewMusicBox
Written By

A rare performance of Grisey’s Le Noir de l’Étoile: a work that is big, challenging, logistically elaborate, and best suited to a context where it can reign as the event that it is. 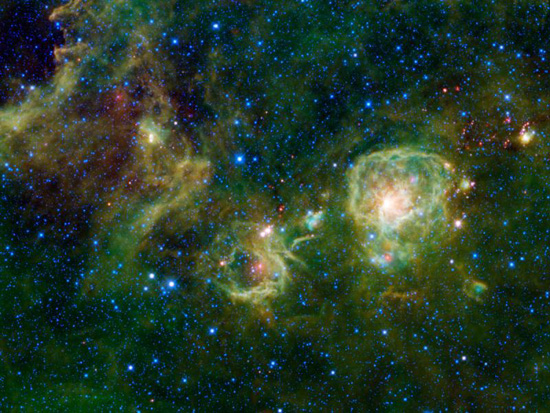 One of the most unexpectedly enjoyable things about Gérard Grisey’s Le Noir de l’Étoile is that the composer let the universe groove harder than the music. That suits the ecologically saturated air of the rustic hamlet of Putney, Vermont, where Grisey’s astronomical rumination had a rare performance on May 25, courtesy of Yellow Barn, the music festival and summer school that, after four decades, remains happily ensconced there. Both the piece and the place find gratification in the seeming middle of nowhere.

Pulsars were the inspiration for Grisey’s hour-long opus, those strange, super-dense objects left after a star goes supernova, the remains becoming a spinning beacon of powerful radio signals; the very sounds of those signals are woven into the piece as the cosmological accomplices of the six percussionist performers. The work’s celestial context was also the point around which orbited a week of community activities; Seth Knopp, Yellow Barn’s artistic director, brought astronomer Tom Geballe from the Gemini Observatory to give talks to Putney residents and students at the Greenwood School, where the performance also took place.

The background was interesting, but the performance was the thing. Yellow Barn has a program of artistic residencies, bringing musicians up to Putney during the non-summer months to pursue projects on a total immersion basis. Percussionists Greg Beyer and Doug Perkins, Yellow Barn alumni both, brought four younger percussionists with them (James Beauton, Amy Garapic, Jeff Stern, and Mari Yoshinaga); while Geballe primed the populace, the six drummers spent a week preparing for Grisey’s one-of-a-kind space opera.

Le Noir de l’Étoile is just the type of piece made for such a residency: big, challenging, logistically elaborate (it was composed for Le Percussions de Strasbourg, famous stockpilers of exotic instruments), best suited to a context where it can reign as the event that it is. The premiere put the six percussionists outdoors, on large platforms, in a ring surrounding the audience. That was the plan in Putney as well, but persistent forecasts of thunderstorms necessitated a move indoors—thunderstorms that never, in fact, materialized (New England Weather Forecasts: Utterly Useless Since 1620™). Still, the Greenwood School gymnasium, though more stuffy and less comfortable than a patch of Vermont lawn (those in the audience inclined to experience the music’s full grooviness sat on floor mats, the smell and grit of which provided instant transportation back to grade-school gym class), was not an altogether bad substitute, making for a more close-up, visceral experience of Grisey’s spatial effects.

Grisey had moved past spectralism by 1989, when he started composing Le Noir d’Étoile, but the music is still saturated with vibrations and series and cycles. The physical nature of pulsars—unimaginably heavy neutron stars, spinning around at unimaginably fast rates, radio signals pouring out of their poles like cosmic lighthouses—is always being reflected in some aspect of the score. Spin is important: most sections build up to an effect of a particular type of sound—bass thwacks, wood blocks, snare rolls—being transferred from percussionist to percussionist, swirling around the audience within. (At one point, the sound of snares spin in one direction, while the sound of gongs spin in the opposite direction, a terrific musical trick.) The signal rates of two particular pulsars, the Vela pulsar (an 11-pulse-per-second hi-hat) and 0329+54 (an 84 beats-per-minute bass drum) keys the rhythmic vocabulary.

But the point of the piece is not to imitate the pulsars—it’s to accompany them. The electronic recordings of both pulsars’ signals are framed like featured players. The percussionists might introduce both the slow and fast rates right at the beginning of the score, but they turn the ratios into waves of sound, amorphous and free-form; when the sound of the Vela pulsar enters, it turns the abstraction into a rave, holding the stage for a long, driving, blazingly metronomic solo. The sound of 0329+54 is delayed even longer, and set up even more palpably, with, of all things, a six-person-strong drumroll, the better to set off its insistent gravity. (In the original performance, 0329+54’s part was actually transmitted live, via a nearby observatory.)

It really is operatic in effect, a showcase for two cosmic prime donne. In fact, Le Noir de l’Étoile is a concentrated dose of Grisey’s customary dramaturgy. The composer might have insisted that music’s true concern should be “sound not theatre,” but few composers of the past quarter-century had Grisey’s knack for showcasing his sounds with such theatrical flair. In a sense, Grisey was forever a gimmicky composer; but the gimmicks are so good, so conceptually apposite, so perfectly suited to the sonic surroundings, that it transcends the epithet. Le Noir de l’Étoile touches on it all: Grisey’s ringmaster-like sense of physical space; his way with a programmatic framework; his Chekovian guns carefully introduced in the first act and going off in the third; his penchant for putting individual sounds and instruments in the spotlight—both acoustically and, on occasion, quite literally. I’m tempted to describe the very Grisey-like coup de théâtre at the end of Le Noir de l’Étoile, but I think I will leave it as a surprise for those who might not yet have experienced the piece. It is another bit of musical shtick, but perfect, in its way, and a punctuation that this particular performance, extroverted and accomplished in equal turn, more than earned.

Introducing the performance, and wryly acknowledging the bait-and-switch weather conditions, Knopp noted in passing that “we’re still hoping for rain”—but the skies remained stubbornly clear, and one exited the gymnasium to a black sky, dotted with stars, each one at some stage of its own life cycle, thermonuclear furnaces at mind-bendingly far remove. Grisey’s rendition brings that life cycle up close, the afterlife of stars channeled into a churning spectacle. There is a memento mori aspect to Le Noir de l’Étoile, not inappropriate for a Memorial Day weekend; after the introduction of the sound of 0329+54, especially, the six percussionists blanket the soundscape with a fine powder of cymbal rolls and wire brushes. Remember you are cosmic dust, and to cosmic dust you shall return. But the whirling snare rolls eventually return—Grisey, the master showman, always knows his best effects—and the piece ends in thrilling rather than melancholic fashion. The life cycle of another person can be as practically distant to us as that of a star; that is, until they suddenly intersect. Le Noir d’Étoile opens out the spark of contact.