The HONK! Festival identifies itself as a festival of “activist street bands,” and while some participants still fit squarely in that category—preaching revolution, buoying the oppressed, putting the call-and-response of political protest to a drumline beat—others seemed fired up less by demonstration than by musical immoderation: the sheer multiple-forte thrill of brass and percussion with the leash off, or the welcome-all-comers triumph of volume over precision.

“Can you dig it?” That was the refrain of the Second Line Social Aid Society Brass Band, kicking off the Sunday night blow-out marathon culmination of the 2012 HONK! Festival. The Somerville-based horde was the prime mover of the first festival, back in 2006, when they invited a few like-minded ensembles up to Massachusetts for a weekend of wind-and-drum rabble-rousing; at this, the gathering’s seventh annual installment, the rabble was over thirty bands strong, housed and fed by volunteers, parading through the environs, taking over public spaces, and, finally, welcomed into Harvard’s Sanders Theatre with Second Line’s blast of enthusiastic groove. 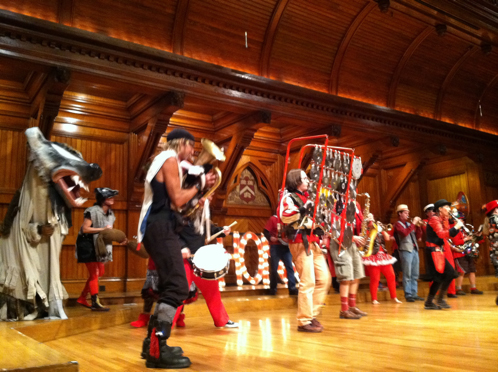 HONK! identifies itself as a festival of “activist street bands,” and while some participants still fit squarely in that category—preaching revolution, buoying the oppressed, putting the call-and-response of political protest to a drumline beat—others seemed fired up less by demonstration than by musical immoderation: the sheer multiple-forte thrill of brass and percussion with the leash off, or the welcome-all-comers triumph of volume over precision. And yet the sense of community was inescapable, the line between performers and audience constantly blurred, bands feeding off each others’ energies, cheering each other on, occupying the hall’s Gilded-Age opulence with unrestrained enthusiasm. The HONK! Festival seemed to be asking: how much can a mere choice of instrumentation be considered a political act?

The more politically straightforward bands were similar in attitude—facets of the venerable, unruly, sometimes quaintly utopian but ever-persistent working-class left: updated Wobblies, with a streak of anarchism and, courtesy of the 2008 financial meltdown, a fresh charge of indignation. Their tactics, though, varied. New York’s Himalayas put the band’s sheer collective nature up front: their ecological protest (”We don’t want to live on the pipeline!”) came out as a defiantly unschooled, percussion-heavy Portsmouth Sinfonia-style happening. That anything-goes attitude was prominent, but most of the bands funneled it into more disciplined musical cadres. The sousaphone player for Montreal’s Chaotic Insurrection Ensemble stenciled the priorities onto the bell of her instrument—“Beauty is not power”—but the band’s power came through with a precision in contrast with their name, a heavy swing to gather the masses.

The Leftist Marching Band (from another Portsmouth, in New Hampshire) also gave a more solid, Famous Flames backing to their chants, and also risked solemnity, playing a mournful “When Johnny Comes Marching Home” in tribute to the Civil War dead the hall commemorates. More local history was channeled by the Quebec City-based tint(A)nar, remembering the 1912 Lawrence, Massachusetts, textile strike with its famous theme, “Bread and Roses.”

Didactic theater was the aim of the Forward! Marching Band, from Madison, Wisconsin, amplifying “Who Stole the Kishka?” into a full pantomime, complete with Victorian-capitalist weasel. Resplendent in red-and-black, socialist-Devo jumpsuits, The Brass Balagan, from Vermont, spoke in klezmer as well, laying down a nice hora-freilach pairing.

The political message was broad, vague—partially by translation into the admittedly blunt instrument of a street band, but also partially by intent. The general mood seemed to be one of recruiting into the cause. The join-up approach could be found in between the lines of the Brass Balagan’s self-description:

The bigger the coalition the better, dissonance be damned. Still, given both the festival’s overall troublemaking cast and the radical proclivities of much of the participants (even in the People’s Republic of Cambridge, one can’t imagine too many other Sanders Theatre crowds hardcore enough to turn “Bread and Roses” into a sing-along), it was more notable how many bands presented an at least nominally apolitical front. And the reason for that, I think, can be traced to the rise of that other autonomous, self-contained revolutionary musical unit: the rock band.

The HONK! Festival’s history, after all, roughly parallels indie rock’s progress toward larger and larger ensembles and collectives; it was only a matter of time before grandiose-punch horn sections ventured out on their own. And punch they do. The What Cheer? Brigade, from Providence, Rhode Island, was punishingly, exhilaratingly loud, a rock-and-roll steam hammer. Santa Rosa’s Church Marching Band, unimpeachably tight, offered precision-machined jabs with surf-rock overtones. The New Orleans-based Young Fellaz Brass Band (a crowd favorite) stretched their swing-funk beat wide with confidence, and at a volume level deafeningly efficient for an eight-piece group. With this kind of power, who needs a Marshall stack? (The drums, too, made their escape via the Loyd Family Ensemble, an Oakland-based outfit that whomped the audience into carnival-parade ecstasy with an impeccable eight-percussionist assault.)

Within the din, bands drew stylistic lines, fine but definite. One category was the punk-cabaret demented circus parade: Vancouver’s Carnival Band, gothic heft laced with a touch of Bacharach-style pop, or Emperor Norton’s Stationary Marching Band, Boston favorites, bringing a touch of steampunk grit to their ragged jam-band excess. (True to form, emcee John Bell had to fairly hound them offstage.) Even outside of the musical style, a lot of bands brought along some circus-like component: dancers, costumes, banners. It reached a culmination with Chicago’s Environmental Encroachment, their ragged, thronged blues rumble accompanied by cheerleaders, a juggler, a flag bearer, and various members of the horde stripping down to their underwear. The one true circus band, the Bread & Puppet Band, normally found in Vermont providing accompaniment for puppetry-based pageants, dispatched a rousing, polka-like march with veteran expertise.

The punk-to-party band axis was a useful reference point. Seattle’s Chaotic Noise Marching Corps (an offspring of HONK! Festivals past) epitomized the former, hard-edged and brash; Austin’s Minor Mishap wreaked havoc somewhere in the middle, weaving touches of Balkan stomping and Desi-Arnaz-style Latin big band into their solid, heavy-metal suave sound; at the good-time far end was Providence’s Extraordinary Rendition Players, a cheerful anti-establishment rave. Another Boston group, the six-piece Dirty Water Brass Band with trombonist Todd Page firing up the audience like a hyperactive pied piper, swore allegiance to the old Boston soul/R&B virtues. Especially danceable was the festival’s lone European delegate, the Pink Puffers, a Roman bloc dedicated to rigorous, Prince-style funk workouts, turning the place into their own discotheque, as statues of James Otis and Josiah Quincy looked on in stony, equanimous silence.

A handful of groups ventured into more unusual waters. The interesting murkiness of soft, low brass fueled Pittsburgh’s Lungs Face Feet, a rare subdued set, atmospheric and moody. Brass Messenger, out of Minneapolis, was saturated with the cooler tint of jazz-rock, getting the crowd to clap along with a tricky, nifty 8+9 groove. Avant-garde jazz emerged out of a one-time gathering, the festival’s collected trombones (and a few sousaphones) united under the direction of Sebastian Isler for a riff-based, freeform jam, like a cluster-filled, aleatoric cop-show anthem.

Isler’s own group, New York City’s Hungry March Band, was a pep band gone bad, the fight songs furious jazz-funk, the cheerleaders moonlighting go-go dancers. They were one of a number of ensembles that, through costume and choreography, upended the conformist order of a high school marching band into something mutinous, as if to retroactively unleash the full power of teenaged id. The Seed and Feed Marching Abominable, from Atlanta, had a similar feel, an outlaw halftime show, the music extravagantly syncopated, the formations anarchic. There was some tapping into the unintentional irony of marching-band arrangements of pop and rock as well, especially by the Hill Stompers, out of Los Alamos, who coupled a Jewish-wedding jam with a gleefully indelicate transcription of Ozzy Osbourne’s “Crazy Train.” Clad in black and gold glitter, the Detroit Party Marching Band pummeled hard-hitting hard-rock accents, creating the sense of a homecoming parade float hijacked by KISS. Again and again, bands created a satiric mirror of the drum and bugle corps, a traditional symbol of order and small-town pride and martial regimen turned into an absurdist horde.

Presence was the one constant. For all their discrete political vectors, the bands embodied the first step of any insurrection: showing up. The Brass Liberation Orchestra, from San Francisco, made the connection explicit; after an opening chant, exhorting a big-tent cast of societal categories to “rise up,” the music, a looping, layered collection of riffs, made no political reference at all. It didn’t have to: just being there, joined together, holding stage and attention in all their multicultural, LGBT glory, was a political statement in itself. Such was the activism of the HONK! Festival, as much implicit as explicit, both the inescapable volume and the go-anywhere-anytime logistical freedom of the brass band analogues of the insistence and action of protest.

Is it enough? It was easy to get caught up in the festival’s enthusiasm, but just as easy to consider the world outside the theatre—rampant inequality, an election season and agenda driven by corporate power—and regard the spirit inside as quaint, or naïve, or a substitute outlet for more concrete action. The HONK! Festival places a lot of faith in merely getting together.

On the other hand, it’s better than never getting together at all. Sunday’s concert closed with the Rude Mechanical Orchestra, and a return to sloganeering: a pro-education chant, a couple choruses of “Which Side Are You On?,” and a formidable Tower-of-Power-like groove mashed into a joyously unlikely whole. They introduced themselves with a mission statement: “to create more noise; to create more movement; to create more revolution.” By that formula, every band in the house was at least a third of the way there.