New York Festival of Song visited the Isabella Stewart Gardner Museum’s Calderwood Hall with a program celebrating Ned Rorem’s 90th birthday. The frame—the tonality, the lyricism, the elegant hedonism—is obvious; but what’s contained within the frame, what is and isn’t there, is something considerably more elusive.

The Isabella Stewart Gardner Museum in Boston is, at the moment, hosting a reminder that what you look at and what you see are not necessarily the same thing. The reminder concerns the museum’s great unhealed rift: the theft, in 1990, of thirteen works of art, including paintings by Vermeer, Rembrandt, and Manet. Because of the terms of Mrs. Gardner’s will—which puts strict limitations on altering her original collection, even down to the gallery arrangements—the stolen items still maintain an absent presence: the walls and displays formerly occupied by the works are left blank and bare. The larger paintings still hang as empty frames: visitors sit at a desk to look at the spot where Vermeer’s The Concert once resided or stand in front of what used to be Rembrandt’s The Storm on the Sea of Galilee and see an expanse of damask wallpaper bound by a gilded rectangle.

On the other side of the museum, in the Gardner’s newer, modern expansion, French artist Sophie Calle’s 1991 installation Last Seen, which is being paired with a new, smaller sequel called What Do You See?, combines large-scale photographs of those empty spaces with textual accompaniment, derived from interviews with museum staff and visitors about the stolen works. It is, on the one hand, a memory piece, but also a piece slyly poking at the question of just what it is we look at when we look at art. Visitors, after all, still go to the Dutch Room just to see the empty frames. 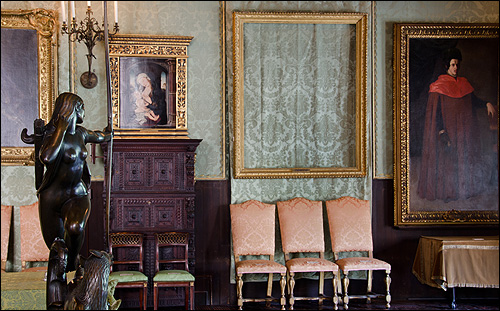 An empty frame in the Dutch Room of the Gardner Museum, where Rembrandt’s The Storm on the Sea of Galilee and A Lady and Gentleman in Black once hung.
Image via FBI.gov

On November 3, across the way from Calle’s installation, the New York Festival of Song visited the museum’s Calderwood Hall with a program celebrating Ned Rorem’s 90th birthday. (It was something of an out-of-town tryout for a November 5 concert at New York’s Merkin Hall.) Mixing Rorem’s songs with repertoire by contemporaries—both friends and rivals—the idea was to present a sketch of a composer and his influences. The outlines, both in the selection and Steven Blier’s program notes, made for a familiar image of Rorem, the brash individualist breezily sailing against prevailing winds, be it in his vocabulary (tonal), his musical accent (French), or even his life (that of an uninhibited and unapologetic gay man). But as the songs unfolded, those outlines began to blur and shift. By the end, the portrait of Rorem was, perhaps unwittingly, more true to the subject’s complexity, more like the charged, eloquent lacunae that Calle was investigating down the hall. The frame—the tonality, the lyricism, the elegant hedonism—is obvious; but what’s contained within the frame, what is and isn’t there, is something considerably more elusive.

Never mind that Rorem, in song and diary, has seemed to cultivate a persona of almost compulsive indiscretion. It is a gambit, a strategem. “The undisciplined first-person involuntarily inclines more to disguise than a novelist does,” the man once remarked. “I am Rose and when I sing / I am Rose like anything,” Gertrude Stein wrote, words that Rorem set with almost bald-faced cheer and lucidity—but words that also hint at a mutability of identity. Pianist Michael Barrett introduced the song by quoting from an interview:

[Rorem]: “I Am Rose,” on a darling poem of Gertrude Stein’s, is short, about ten seconds long. There are as many ways to sing it as there are singers, and it can go fast or slow or in between. It’s my masterpiece.
[Interviewer]: Oh?
[Rorem]: I’m being cute.

The thing is, in Rorem’s music, “being cute”—that dance between admission and retraction, between candidness and concealment—is serious business.

Much was made, in the concert, of Rorem’s Francophile tendencies, but there is one decidedly Germanic streak in his songs, and that is the idea of continuous variation, the idea that Schoenberg analyzed out of Brahms as a justification for his own perpetual permutations. The context might be worlds away, but the technique is the same: Rorem’s ideas almost always return in slightly different guise, a musical nod to the quiet churn of even the most benign emotion. In a way that seems to bow to both Heraclitus and Sondheim, Rorem never does anything twice.

That was especially apparent when the songs were contrasted with strophic counterparts. The distance between Marc Blitzstein’s “Emily” (from his Airborne Symphony)—a World War II bombardier writing a letter to his sweetheart before a flight—and Rorem’s “A specimen case,” from his cycle War Scenes—a Walt Whitman portrait of a dying Civil War soldier—was striking: Blitzstein hewing to verse and chorus in serene tension, Rorem letting the musical expression overrun the form. Even in gentler songs, “Full of life now,” say (a lushly Impressionist Whitman setting from 1989) or “Come In,” a Robert Frost poem included in the 1997 cycle Evidence of Things Not Seen, Rorem never quite returns to where he began, the vantage point continually on the move, the seemingly unguarded style nonetheless staying a step out of reach.

The concert, then, had both a plausible feel of being a true portrait of Rorem and a strong sense that it was only one of many possible such portraits. It was painted with skill: Blier and Barrett divided the piano duties, with unimpeachable style; the singers were quite fine, baritone Andrew Garland all polished stentorian brawn, mezzo-soprano Kate Lindsey more mercurially expressive and playful with the text (though also, at times, more distractingly mannered, in a breathy-straight-tone-cabaret way). Rorem’s familiar hits were there: “The Lordly Hudson,” “Alleluia” (reimagined as a bright, anything-you-can-do competition between Garland and Lindsay), and “Early in the Morning” (an encore, sung in unison by a group of New England Conservatory students, turning Rorem’s delicate Parisian sojourn into something more like the crush of a tour group), The groupings were smart—not only the Blitzstein and “A specimen case,” but Francis Poulenc’s “C” flowing alongside “The Lordly Hudson,” for instance. The angles, though, were carefully chosen.

The between-number narration, drawn from Rorem’s writings and interviews, tended toward the witty and wicked—how could it not? But the music told an additional, parallel story. Near the program’s end came Rorem’s 1949 setting of Elinor Wylie’s “Little Elegy.” It starts off with an almost in-your-face expression of confident naïveté: a diatonic scale, up and down, simply harmonized, over which the voice weaves its way. But the harmonies start to shift, the piano’s lower register slips in and troubles the waters ever so slightly, the camera turns off center and toward the shadows. Rorem’s frames are so prominent and unmistakable that it’s easy to miss how much he has shifted the image inside them, how much the picture is a moving one. What do you see?