After four decades, Kronos is still a new music group that takes its citizenship in the new music community seriously: show me another ensemble that has given more composers both the opportunity and the benefit of a meticulous, passionate performance. The music they cultivate might be geared to what they do well, but what they do well, they do better than anyone.

The end of Kronos Quartet’s concert in Providence on November 8 was almost designedly apt. At the close of Kareem Roustom’s A Voice Exclaimed (a world premiere), Kronos—surrounded onstage by faculty and students from Providential superheroes Community MusicWorks—began sending snatches of Middle-Eastern-tinted melody out into the Rhode Island School of Design Auditorium. These melodies were promptly echoed back by a sudden ingress of even more MusicWorks students, processing in from the back and sides of the hall. Kronos, the pied pipers of contemporary string quartet music, had enticed another crowd into their circle.

Kronos Quartet is celebrating its 40th season, a significant milestone; having that on the brain might be why I kept hearing the concert, on the whole, as a musical version of one of those married couples who grow to look like each other. Kronos played mostly recent works that all, nevertheless, had a kind of essential Kronos-ness about them: making reference to specific international vernaculars, utilizing Kronos’s flair for using extended techniques and intonations to evoke indigenous instruments, wrapping the whole thing up in a package of rock-and-roll energy and curated cool. I wouldn’t begrudge them any of it. After four decades, Kronos is still a new music group that takes its citizenship in the new music community seriously: show me another ensemble that has given more composers both the opportunity and the benefit of a meticulous, passionate performance. They’ve withstood their share of personnel changes, particularly on the cello—Sunny Yang is now there, joining violist Hank Dutt and violinists John Sherba and David Harrington—but their performance standards remain impeccable. The music they cultivate might be geared to what they do well, but what they do well, they do better than anyone. 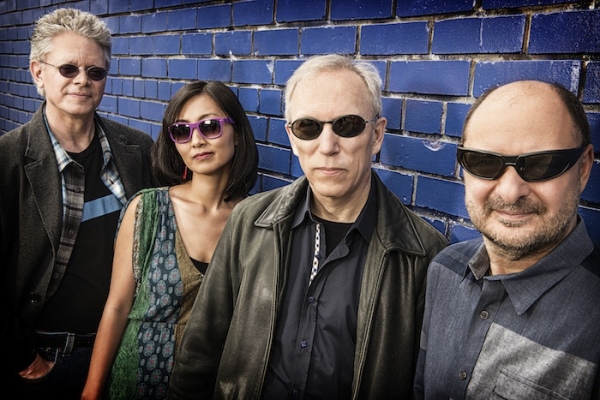 That said, the sort of genre-play at the heart of a lot of Kronos’s commissioned repertoire is not without its compositional perils. Roustom’s new work, the evening’s centerpiece—an expression of hope for his Syrian birthplace in the face of appalling violence—was the most effective of the evening’s Kronos commissions, mainly, I think, because his crossing of genres, his strategy of adapting Arabic musical materials to Western forms came with a certain clarity of purpose. When it works, Roustom’s use of familiar, firmly outlined formal patterns makes it easy to tune into the rhetorical novelties of the unfamiliar modes. This was especially beguiling in the second movement, “Consolation,” a call and response derived from a Syrian Christian hymn: Kronos would play a phrase in Arabic temperament, and the MusicWorks players would answer in Western equal temperament, a pattern that actually brought out additional, unexpected expressive subtleties in both intonations. And Arabic rhythmic cells made effective, Beethovenian motives threading their way through the outer movements.

The mix of expectations didn’t always play out: the mismatch between Roustom’s slow, static harmonic rhythm and developmental structures that, in the classical tradition, rely on increasing harmonic momentum meant that often the music was stuck at a low simmer just when it seemed necessary to boil over into the return of a theme or a section. Still, Roustom’s managing of the needs of both the forces—a triple quartet (one of which was expanded with additional players) of varying abilities, plus the extra theater at the end—and the needs of the occasion was skillful. A Voice Exclaimed provided a showcase for Kronos, the exceptional work MusicWorks is doing, and the sense of community involvement and pride that MusicWorks has fostered. That theatrical ending tied together the whole package—the piece, the players, the production, the process.
The first half of the concert was all Kronos, a mix of commissioned originals and arrangements, the provenance neatly dividing into music that imposed elements of genre and music that inhabited them. The commissioned works alternated between folk and pop costuming. Bryce Dessner’s Aheym reworked the musical colors of Eastern European Jewish immigrants into aggressive ostinati. Nicole Lizée’s Death to Kosmische looked to deconstruct the heavily synthesized Krautrock of the early ’70s—Popol Vuh, Tangerine Dream—going so far as to have the players put down their strings and pick up, periodically, a stylophone and an omnichord, redolently obsolete. Alexandra Vrebalov’s …hold me, neighbor, in this storm… had even more going on: Harrington and Sherba doubling on a Balkan gusle and double-headed drum, respectively; a recorded overlay of bells and thunder and calls to prayer; the full toolbox of Kronos’s imitative skills—microtonal inflections, expressively widened vibrato—brought to bear.
The arrangements were a similar old-and-new playlist. Judith Berkson’s transcription of Alter Yechiel Karinol’s “Sim Sholom” turned its pre-WWI cantillation into a fluid, florid solo for Yang’s cello, barely and simply accompanied by the other three. Jacob Garchik’s version of Laurie Anderson’s “Flow” used the instruments’ long-bowed abilities as a canvas for the song’s wisps of gently jostling triads. For an encore, Kronos slipped into Garchik’s arrangement of Greek-American chanteuse Marika Papagika’s 1918 “Smyrneïko Minore,” a slyly woozy bit of romance that turns briefly, bracingly frisky.

The programming was clever—while the arrangements were all bunched together, each seemed to have its counterpart among the original pieces: “Sim Sholom” and Aheym surveying the diaspora; “Smyrneïko Minore” and …hold me, neighbor, in this storm… a yin and yang of Balkan life; “Flow” and Death to Kosmische paying tribute to pop influences. Roustom’s piece had its programmatic partner, as well: another Garchik arrangement, of Omar Souleyman’s “La Sidounak Sayyada,” envelope-pushing Syrian pop music at its finest.

That sense of invention—Souleyman’s rhythms so happily furious as to threaten to overrun the meter—was, in the end, stronger in the arranged pieces than in the originals: they had the ebullience and fizz that comes with working within a genre rather than merely with it. Part of that is Kronos’s skill at curation, certainly; but part of it is also the difference between aiming for a style and inhabiting one—even, perhaps, looking to get out. Aheym was energetic and accomplished; but “Sim Sholom” was something considerably more mysterious and sublime. Lizée’s dismantling of very particular pop tropes, halting and dreamlike by turn, was diverting; but that Anderson/Garchik “Flow” was simply one of the most gorgeous things I’ve ever heard.

Prior to A Voice Exclaimed, Kronos and the MusicWorks players joined for an older Kronos commission, John Oswald’s 1990 Spectre. The music grows out of the sounds of the instruments tuning up; at its height, Oswald—drawing on his Plunderphonics proclivities—brings in 1001 pre-recorded quartets, a jet-like din over which the live players then exaggeratedly mime a performance. As the recorded quartets shift into pizzicato, the live players again join in, and the piece winds down in a plucked fog. It’s a deftly, almost daftly simple piece, a gag, an idea, a trajectory, and not much else. But it’s concise enough not to wear out its welcome, and the execution has flair. Its arranged complement? Kronos’s final encore, Raymond Scott’s familiar-from-cartoons classic, “Powerhouse.” It could have been a reminder that, if you’re going to play with genre, you shouldn’t forget to also play.