Today the Detroit Symphony became the first American orchestra to make its performance archive available on-demand. Among the 100 full-length works featured are pieces of music by 17 living composers. 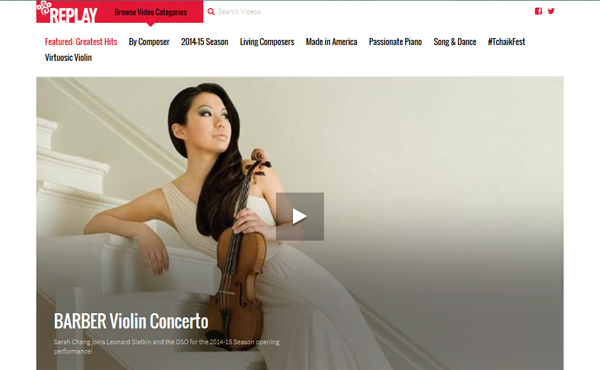 A screenshot from the DSO’s just launched Replay streaming archive. Note the full down menus for American repertoire and music by living composers as well as that the highlighted work is Samuel Barber’s Violin Concerto.

This morning, the Detroit Symphony Orchestra (DSO) launched Replay, an on-demand classical performance archive in HD featuring over 100 full-length classical works originally performed on the orchestra’s Live From Orchestra Hall webcast series. The archive will be refreshed with new content each week during the classical season. Members can browse content by composer, date, or through a rotating series of curated playlists such as “Living Composers,” “Made in America,” “Virtuoso Violin,” and many more.

“Thanks to Live From Orchestra Hall, lovers of great music have been able to enjoy our performances here in Detroit no matter where they may be,” said DSO Music Director Leonard Slatkin. “Through Replay, they can relive these concerts whenever they would like.”

All visitors to Replay can experience a free two-minute preview of any of the performances included in the archive, but already there are 5,000 annual fund supporters who are immediately eligible to use the new service to its full extent to see and hear all of these performances in their entirety. All patrons who join the annual fund with a gift of $50 or more will receive full access. The DSO is the first American orchestra to make its performance archive available on-demand. The DSO’s contract with its musicians grants permission to stream performances each week live and then replay that content for three years on demand. Prior to today, past Live From Orchestra Hall footage was only available through special encore broadcasts on dso.org/live or through YouTube clips. Live From Orchestra Hall is presented in partnership with Detroit Public Television, with support from the John S. and James L. Knight Foundation and the Ford Motor Company Fund. Replay’s streaming archive is made possible through hosting services provided by Brightcove, an online platform that offers CD-quality audio and video in 1080p HD resolution.

“Replay is an innovative use of Brightcove Gallery and positions the DSO as a leader among Brightcove customers using the product to engage and inspire audiences across any device,” said Linda Crowe, Vice President of Digital Marketing at Brightcove.

(–from the press release)