A distinction needs to be made between music that uses a work of visual art as a source of inspiration and music that has been envisioned expressly for the purpose of illuminating, commenting upon, and conversing with visual art—music where viewing the art while listening to the music is, in some sense, essential to the full realization of the composer’s vision. 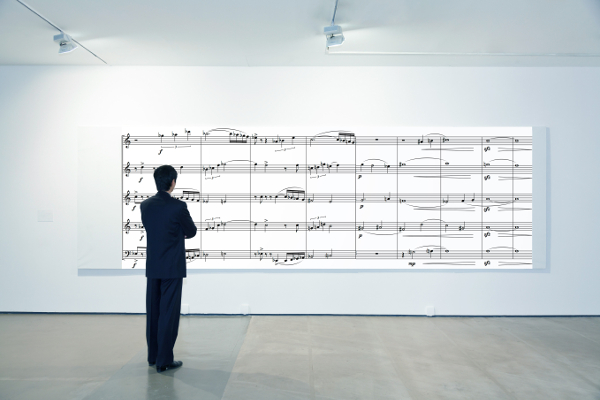 My previous column posed some broad possibilities and potentials for new music as a catalyst for learning. Now I’d like to turn my attention to one specific realm of music for learning I’ve explored in my work as a composer: music inspired by visual art.

“Inspired by” is, of course, a problematically vague descriptor. (If you think of something better, please share it with me!) My intention has been to create music that draws the listener into the world of the artwork—music that gives the listener a new lens through which to see art.

I’ve come across many pieces of music, by different composers, in which the composer has been drawn to a work of visual art as a source of inspiration—as a writing prompt, in a sense. To my ear, such works oftentimes result in music with an abstract or imperceptible connection to their source material: the visual art has had more to do with process than product. There is, of course, absolutely nothing wrong with this approach or the music that results. However, as both a listener and a composer, I feel a distinction needs to be made between this kind of work and music that has been envisioned expressly for the purpose of illuminating, commenting upon, and conversing with visual art—music where viewing the art while listening to the music is, in some sense, essential to the full realization of the composer’s vision.

My love of visual art, and my desire to increase appreciation of relatively under-recognized visual artists, has led me to incorporate art into my musical projects in many ways. These projects have ranged from a one-act monodrama depicting the artistic evolution of painter Charles E. Burchfield (The Coming of Spring, 2014), to a piece for flute and guitar following the work of Japanese-American artist Chiura Obata from Yosemite National Park to an internment camp (Dai-Shizen (Great Nature), 2014). At the heart of many of my visual art-inspired projects have been multimedia concerts, which I’ve brought to art museums as well as concert halls, in which the music is performed live with images of the artworks projected above the performers.

Using music to teach visual art appreciation has been core to my art-inspired endeavors. For one project, I put together an evening-length program of chamber music inspired by visual art and produced an in-depth complementary online “concert companion,” containing videos featuring interviews with senior museum curators about the artists and written commentary with excerpts from the music demonstrating how I translated art into musical ideas (Beyond the Notes: Music Inspired by Art, 2011). This website and related videos are now a standalone educational resource. 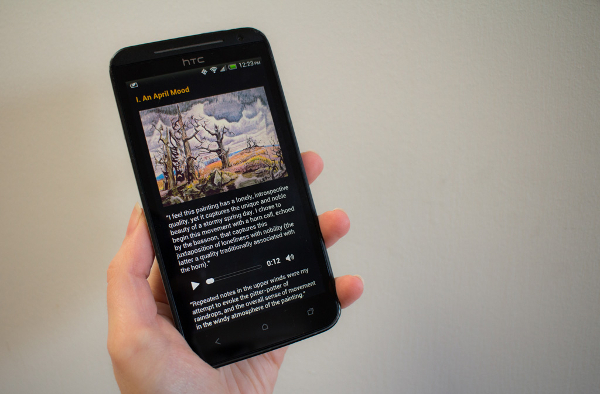 Illuminating the connections between music and visual art through a mobile website. Photograph by Nell Shaw Cohen.

The specific compositional techniques with which I’ve attempted to evoke visual art are beyond the scope of this article. Generally speaking, in addition to finding musical equivalents to color, texture, line, shape, etc., I’ve sought to represent and even guide the gradual wandering of one’s gaze across an image. Different sections or elements of the music are envisioned as responses to different areas within the image.

Music Helps Us to See

So, how exactly does music deepen an understanding of visual art? It has been empirically shown that pairing visual art with music can stimulate learning experiences and promote art appreciation skills. A study by Victoria Pavlou and Georgina Asthanasiou (2014) found that presenting images of an art object simultaneously with a complementary musical recording (which the researchers selected for pairing) led to significant improvements in art appreciation amongst college students who were inexperienced viewers of art. In post-experiment interviews, the participants reported that listening to the music made a substantial positive impact on their ability to derive meaning from both representational and abstract artworks and generally prompted stronger emotional responses to art.

Anecdotal evidence has confirmed this phenomenon for me. Audience members at performances of my work have commented that listening to the music while viewing video projections of the art enabled them to understand or appreciate the artworks in ways that they hadn’t without the stimuli of music. In some cases, these audience members had actually experienced a music-free viewing of the original painting in the museum’s gallery directly prior to the concert.

In addition to the aesthetic and emotional responses that music can incite, some of the positive effects of pairing music with visuals might simply stem from the support of sustained viewing. Lachapelle, et al. (2009) conducted a study in which they tested the common assumption that there is a positive correlation between duration of viewing and greater appreciation of art. This was found to be true in the majority of non-expert viewers that they studied. Music has the advantage of being a temporal art: in performances of some of my works, listeners are shown a projected still image for five or six minutes at a time during the musical performance. In our highly interconnected and hyper-stimulating age of the Internet, motivating people to simply look at an artwork for a sustained period of time is no small matter!

Of course, well-chosen music can certainly complement art viewing even if the composer hadn’t envisioned the music for that purpose. Conversely, music inspired by art should certainly have the potential to be fully engaging without being presented in tandem with the artwork (most of my art-inspired works have, at some point, been performed and heard sans video projections). I’m simply seeking to create work that is optimized for that pairing, in which the art and music are enriched and elevated for audiences through their juxtaposition. 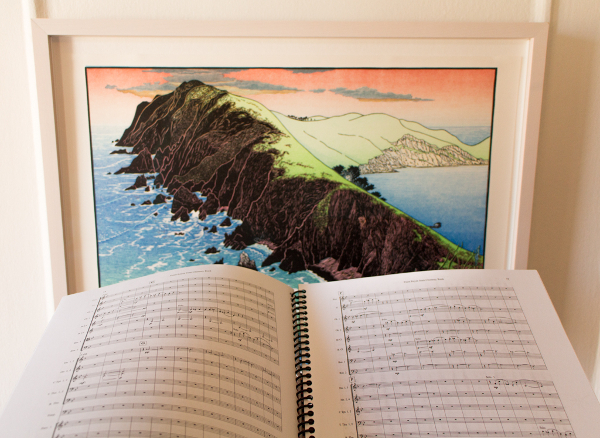 In addition to enhancing appreciation of visual art, my other motivation for creating music inspired by visual art is to bring experiences of new music to audiences that are interested in visual art and attending arts events in general, but would be very unlikely to listen to new music in another context. Ideally, this works on two levels: first, by attracting new audiences through strategic marketing, then supporting the listening experience through visual stimuli.

I strongly suspect that, for people unfamiliar with new music, there is a substantial boost in the immediate appeal of a new music concert when placed within a larger arts context. For example: the multimedia concerts of my chamber music inspired by paintings on display at the Peabody Essex Museum in Salem, Massachusetts, and the Parrish Art Museum in The Hamptons, New York, attracted some of the largest audiences my music has enjoyed—most of which, I perceived, were not usual new music listeners or even particularly devoted consumers of “classical” music. I can’t imagine the Peabody Essex concerts, for example, would’ve been nearly so well attended if they had been publicized as performances of “String Quartet No. 1” rather than a musical representation of paintings featured in the museum’s special exhibit.

(Disclaimer: it’s extraordinarily irritating when music is publicized as having a close relationship to visual art but doesn’t deliver on the promise! Furthermore, an irrelevant-seeming or super distracting video projection can tend to overshadow any enjoyment I might’ve derived from the music alone.)

Once the audience is present, attaching musical experiences to visual content may actually help many listeners to focus on, comprehend, and enjoy the music as they listen—especially if there is a strong, carefully considered resonance and balance between the visuals and music. This phenomenon has been demonstrated in a range of contexts, from cartoons to music videos. Many composers have long been exploring the integration of custom, dynamic visuals with musical performances. I think the potential for visual content to support listening deserves further investigation and consideration in contexts where music is being used as a learning tool for visual art appreciation.

Has music ever altered the way you perceived a work of art, whether or not the music was intended for that purpose? Are there any works of music explicitly inspired by visual art that you’ve found particularly effective or impactful? What do you think are the most important problems and possibilities of pairing these two art forms in the ways I’ve described?