Music In Architecture
NewMusicBox
Written By

Don’t let the gray, which is rapidly overtaking the brown, fool you. Despite not looking the part, I am in fact a doctoral student at the University of Texas at Austin, and I make my way several miles north on a daily basis to get my fair share of abuse. It’s a big campus—40 acres—and like the downtown of our fair city, it is populated by cranes, work crews, new buildings, detour signs, and all the attendant din that accompanies such environments. Despite being constantly surrounded by sound and structure, the connection between the two is usually overlooked, especially while dodging buses, scooters, and the tide of humanity that moves hourly from building to building. Recently, the Center for American Architecture and Design, The School of Architecture, and The Sarah and Ernest Butler School of Music hosted Music in Architecture • Architecture in Music, an international symposium to “explore the connections between architecture and music through research, composition, design, installation, and live performance.” The four-day event featured papers and presentations from an international gathering of artists and scholars, plus a collaborative composition/architecture competition. Eight collaborations were presented, as well as several pieces that were written for the festival or were featured specifically because of their relationship to architecture. 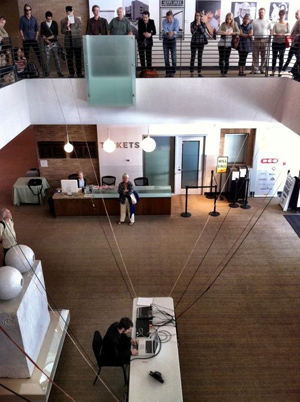 hEAR TOuch LISTEN by Florian Tuerke and Rene Rissland was performed in the main lobby of Bass Concert hall by Eli Fieldsteel (full disclosure: Eli is a fellow student/colleague). The hall is five stories tall and the lobby is a large open atrium with balconies on each level. Connected to the handrails (actually sort of wedged in there) were seven speaker drivers which were, in turn, connected by long wires to a control system on the first floor consisting of a laptop, power amplifiers, and a MIDI interface with which Fieldsteel controlled various parameters. Each of the seven rails was chosen based on the natural resonant frequencies they produced when driven (vibrated) by the speakers, as well as to provide a variety of sounds from subsonic to supersonic [1]. The audience was encouraged to move around the space and among the floors, as well as to touch the rails to experience the sound in a variety of ways. The piece was in three continuous sections and began with primarily long tones. The volume and variety of sound was impressive, at times causing the floor to rumble before giving way to high ringing sounds like some giant bowed waterphone. Low frequencies descended and became rhythmic figures, which resulted in a number of “kids at the zoo” moments [2] (with all due respect to the audience) as people touched the rails and felt the vibrations course through their bodies. The second section contrasted the first and featured shorter, sharp sounds bouncing from floor to floor. Unlike the physicality of first movement, this section was primarily experienced through the ears for me. I noticed that some of the audience moved away from the rails to hear the sounds throughout the space. This finally segued to the third section, which featured pre-recorded sounds from outside the hall. The original plan was to feed live sounds from outside through the system, but because of technical issues the pre-rendered sounds of birds, bugs, and other campus life were featured instead. 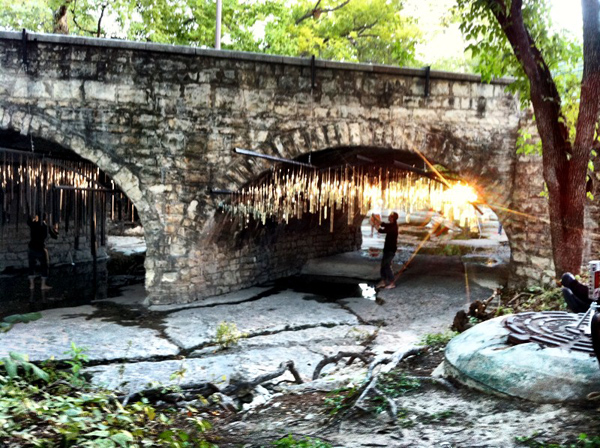 A variety of styles and aesthetics were represented during the symposium, and the next presentation I saw was quite different from sound-art abstraction in the lobby of Bass. Composer Frank Clark and architect Cecil Balmond created Theater of the Imagination, a five-movement work for chorus based visually on elements from a variety of Balmond’s works and fundamental shapes such as line, circle, quadrilateral, polygon, and arch, and musically on “Byzantine Chant, Bartok’s axial tonal structures, and the prime numbers 2, 3, 5, and 7.” Clark used the aforementioned shapes not only in conjunction with the circle of fifths to derive the musical materials but also to derive the text of the piece. The choir appeared in a number of configurations relative to the audience; sometimes surrounding us, sometimes flanking us antiphonally, and even occasionally hopping in place. Center stage and facing the audience were two large flat screen televisions and two larger projection screens on either side, all of which displayed a variety of visual material throughout the piece, including architectural mock-ups, undulating shapes, and mathematical formulas. The piece was largely polyphonic and dense, and the performance was essentially a capella, though there were additional pre-rendered lines that echoed various lines of the chorus. At the end of the piece, director Jerry Ulrich came to the stage (he’d been conducting from the center of the seating area of the hall with help from assistant conductor Tim Hsu) and indicated that while the choir was from Georgia Tech, they were not music majors. He then asked the members of the choir who were engineering majors to please raise their hands, in response to which around 80% of the performer’s hands went up. He also indicated that later in the season they were performing pieces by Pärt, Webern, and Gorecki, which for a professional (or music-major populated) choir would be challenging, but for an amateur group (and I use that term in its truest sense: one who loves what they do) is really impressive. Avocational choirs populated by engineers, lawyers, bus drivers, and the guys holding the slow/stop signs at construction sites that perform 20th- and 21st-century repertory are a good sign for the future.

For the closing work of the symposium, Paul Dresher and Michael Benedikt, with Michael Rotondi and Coleman Coker, created LOW CLOSE VAST, a three-movement work performed (for the most part) with the audience and performers on the stage of Bass Concert Hall. The first movement began with Benedikt introducing the piece and informing the audience that he would direct them to different areas of the stage for each movement. He then directed the audience to move inside a large circle in the middle of the stage surrounded by several music stands stage left and right, a piano further back on the stage, and a drum kit closer to the edge of the stage. Above us were three large back-lit cloth panels. The stage curtains were drawn and the lights were low, so we were all pretty cozy in there. The piece started with the piano playing ascending eighth-note lines accompanied by low brass that would occasionally peak above the piano waves. These were joined by high brass and winds in a slowly building antiphonal (there was a lot of surround sound at this symposium) hocket-centric maelstrom. The drum kit came in, hi-hats blazing on upbeats somehow squeezed in between the antiphony, all of which somehow held together despite the fact that the conductor was perched on a modest podium in the middle of a slowly simmering and spinning audience that was not only crammed (not uncomfortably) into a circle, but was also being advanced upon from the heavens by the aforementioned back-lit cloth panels. There was so much going on musically and visually that it wasn’t until the closing moments that I noticed that the sky was falling, albeit in slow motion. The movement ended with gentle swells and our friend the panels, well, quite low. For the second movement, the audience moved to bleachers set up further back on the stage. The bleachers faced gently inward and formed a “C”, converging on a pianist, a cellist, and a lamp. It was as though we were looking in on a living room and watching two friends play chamber music at home. This was accentuated by the fact that the cellist was facing the same direction (stage right) as the pianist, as opposed to facing the audience. And his jacket was hanging off of the back of his chair. A lilting 2 against 3 white note pattern slowly developed into a more dissonant texture until eventually the pianist’s right hand was doing a kind of cluster hopscotch from the bass to the treble while the cellist followed suit. The piece quietly ended having clearly given us a sense of “Close” in the same space we’d just experienced “Low.” The finale began with the lifting of the curtain and final move of the audience to the edge of the stage, which allowed for a nice full view of the hall. Those who have played in large theaters have experienced a view like this, but it was particularly interesting to experience it with most of the lights off and without anyone in the seats out there. Vast, yes. Off in the distance, a piccolo on the second balcony began sounding, and despite the tessitura of the piccolo (which usually allows you to find it with pinpoint accuracy) it took a moment to work out that it was all the way up there. Eventually a light fell on the player as he was joined by a clarinetist, both performers trading sparse parts off in the distance. One by one the other players were revealed throughout the theater as the piece unfolded, built, and quietly ended. This literal approach to relating to the space was refreshing, and it brought the audience into the music in a way I hadn’t experienced during any of the other presentations. 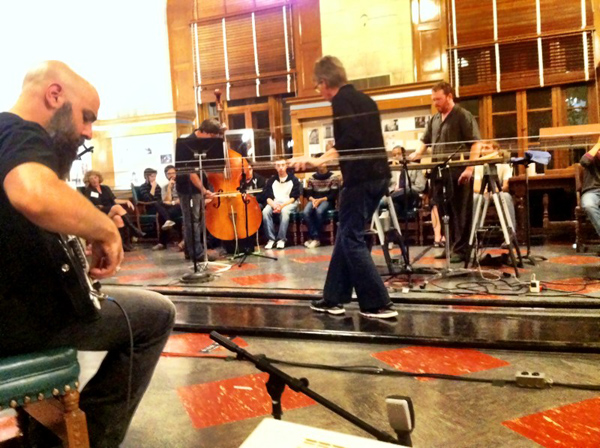 Unfortunately, I didn’t get to see Ellen Fullman and the Long String Instrument, which was one of the performances I was most excited about. Despite arriving 20 minutes before the show (and only 10 minutes after the doors opened) I was told that they were already at capacity. Crushingly disappointed, I went back out into the cold Austin night (78ish…) sad that I’d missed the show, but heartened to know that even though there were four days of experimental music involving lowering ceilings, singing handrails, and hopping choirs, the demand and interest in such music is alive and well. And building [3].

1. If this concept is little tricky to imagine, take a tuning fork, strike it, and put the handle firmly on the top of your head while it’s vibrating. In this scenario your head is the handrail and the tuning fork is the speaker driver. Now imagine that you have seven heads and your tuning fork goes to eleven.