By now it’s more than a decade since Jonathan Kramer, George Rochberg, Ralph Shapey, and Iannis Xenakis have passed, so there is some time to assess where their art stands in their wake, even though it’s still very early in the eternity game.

I left off last week with the image of four teachers—Jonathan Kramer, George Rochberg, Ralph Shapey, and Iannis Xenakis—now all gone. By now it’s more than a decade since they have passed, so there is some time to assess where their art stands in their wake, even though it’s still very early in the eternity game. 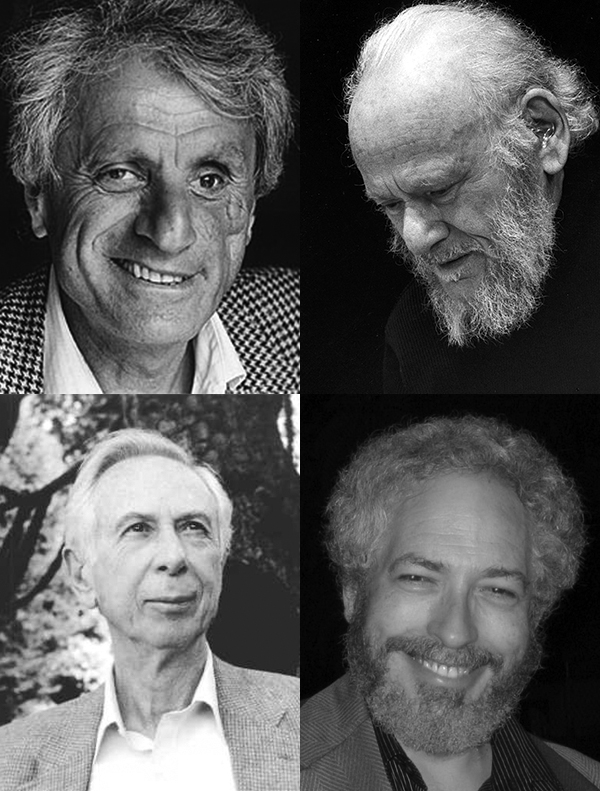 Of these four, Xenakis’s (who died in 2001) popularity seems to be in the best shape. [Disclosure: I was not a private student, but took his weekly course in Paris over 1980-81, along with about a half-dozen others in a classroom at the Sorbonne, so the impact was close and sustained.] Inevitably, the juggernaut of European cultural momentum was already in motion on his behalf, but there is more. The music’s visionary intersection of architecture and science reaches out to potential listeners who may not usually be interested in “new classical music.” Its fearsome, near-impossible technical demands actually serve as a challenge for a certain sort of “thinking virtuoso” and suddenly don’t look so hard once they’ve been mastered and get out into the air. (Just look at how Rebonds seems to have become a student percussion recital favorite.) The often savage sound and rhythmic drive can feel like punk or industrial rock. And the scores, often generated in stages from abstract, geometrical drawings to final manuscript, appeal to visual artists. (A show at the Drawing Center in New York a couple of years back drove this home.)

Rochberg (who died in 2005) is an interesting case. On the one hand his music is the true opening salvo in the American “postmodern revolution” which started in the late 1960s, but he also never liked the term or the identification. He was far too passionate and straightforward in his usage of older styles and materials to embrace the irony that was a hallmark of the aesthetic. Even today, many of the shifts and references in his work can be unsettling in how obviously they deny any sense of what we call “originality.” But that very discomfiture also drives interest. Though scattered, I continue to see recordings and performances, suggesting at least a continuing simmer of interest, enough to preface a boil at some point.

Kramer was known even more as a theorist than composer, though I always felt the power of his ideas led his music into very original byways. For those who don’t know his book The Time of Music, I can only say, “Find it.” Inexplicably out of print but at least in many libraries, it’s a visionary exploration of a vast array of approaches to the articulation of music in the temporal medium. It’s the first text that shows the water we fish swim in. I’m editing a posthumous text of his—he died in 2004—Postmodern Music, Postmodern Listening, that once again dares to explore an intimidatingly wide range of aesthetics and approaches to musical thought in the wake of modernism’s fading prominence as a flagship practice. But at this point, there’s not much buzz about his work as a composer, though perhaps renewed interest in the books will in turn lead to similar exploration of his music, to which I think his thought is symbiotically tied.

I guess it’s Shapey (who died in 2004) that has me the most concerned. When I studied with him in the late ’70s/early ’80s, he was on a roll. An unbuttoned, profane man who never self-censored, he’d just ended a boycott of the performance of his own music (out of disgust with the field), and soon thereafter won a MacArthur, was performed worldwide, and even had the dubious distinction of being denied the Pulitzer by the general committee after the musical one had recommended him. Having spent decades in Chicago after a sort of “exile” from his beloved New York, he was in his own way a quintessential “maverick.” The music was unashamedly romantic and transcendental, and took cues from composers such as Ruggles, Schoenberg, and Varèse (maybe most of all).

And yet now I see very few performances and similarly few recordings. Of brilliant younger performers taking up his cause, the only one I’m aware of is Miranda Cuckson. Maybe more disturbing is the fact that almost no younger composers I encounter know of him, and certainly don’t know the work. I knew of Ralph’s passionate desire to make art that had a timeless quality and of his longing to enter the repertoire. So that deep yearning and total commitment seems even more painful, at least at this moment, in the face of what feels like a new exile, this time from a continued life for his music. At this moment he stands as an example of how quickly winds of taste and fashion can shift, and often mysteriously. (I suppose that one small side effect of these posts might be to have some of you take another look at Ralph’s work.)

But that isn’t the primary or ultimate topic here. From both my personal standpoint, and the slightly enlarged framework of the composers I knew as teachers, I’ve started to limn the issues involved in music’s continuance after its initial appearance. I think there are three big questions here (yes, among a million others):

I’m going to try to give some answers in the remaining two weeks, risky as it is.

Throughout my childhood and college I trained as a historian, something a bit out of the ordinary for a composer. And that encourages me to take the long view. Of course, all of this is quite fragile in the face of the inscrutable and mutable factors of “aesthetic evolution.” (I often tell my students, “You know the nature films with the lion and the bunny. You are the bunny.” And I swear I didn’t know that song from Urinetown when I first said it.)