More Famous Than You
NewMusicBox
Written By

More Famous Than You

There has been a deluge of commentary in response to Dan Joseph’s extremely measured reaction to Daniel Asia’s recent anti-John Cage polemic for The Huffington Post, as well as a more modest, but also significant set of reactions to my own thoughts about how the arbiters of taste and relevance in the media ultimately determine what becomes mainstream. It amazes me that now, 13 years into the 21st century, there are so many people still actively fighting the battles of the 20th century.
I’m pretty much open to any idea except an idea that winds up being exclusionary. To me the genre sanctity debates (whether they’re about music that is not popular enough to be “popular” or about music that’s not classical enough to be “classical”) are ultimately about keeping people out. I like letting people in. Similarly, the debates about whether music should be either tonal or atonal, minimalist or maximalist, precisely notated, contain elements of indeterminacy, or be completely improvised on the spot are all fences that ultimately keep folks from enjoying the picnic. From my vantage point, the 21st century has gotten past a lot of this, both in terms of the plurality of aesthetics that inform today’s creators and interpreters, as well as in the ways in which listeners come to this music. 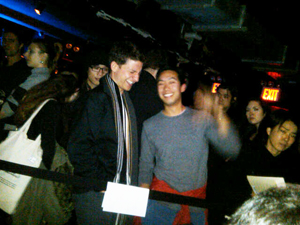 There wasn’t a single empty seat at LPR’s all-Carter program last night and standing room seemed worse than a rush hour commute. So much for Carter’s music not being “part of the popular soundscape.”

In the late 1970s when I first met him, Elliott Carter represented “uptown music,” an approach to music I initially felt, as an aspiring “downtown composer,” that I needed to reject during the final years of the stylistic wars being waged around me. Yet Carter lived downtown in Greenwich Village for the final 60 years of his life. On Sunday night, his memorial concert was held at (Le) Poisson Rouge and it was the biggest crowd I had ever seen there. When I first met John Cage—not long after I had first met Carter—he represented for me the freedom to do anything I wanted to do. Of course, it turned out that there was ultimately method to Cage’s seeming madness. He also wasn’t open to everything.

But now with decades of hindsight, all that music has been absorbed into our history. Cage and Carter are both no longer with us, which means that they’ll probably finally be embraced by some sectors of the classical music community who only care about dead composers. They will undoubtedly both be lionized in a way that was never possible while either of them were among the living, although they probably will never catch up to the fame of Beethoven and that gang. Not because their compositions are any less worthy, but because we continue to subscribe to the absurd received wisdom that music evolved to a higher plane in Europe than anywhere else in the world, and that after reaching a pinnacle somewhere in the 19th century it devolved from there. But just as those classical tastemakers may decide to begrudgingly allow a few 20th-century Americans into the vaulted canon of Western classical music, the pop tastemakers won’t care a hoot about this news from yesterday and will proclaim certain fleeting trends to be in and everything else out. So for better or worse, Beethoven and whoever is the Lady Gaga du jour will always be more famous than the rest of us who are making music that we feel passionate about.
Nevertheless, fascinating music continues to be made all over the planet; it continues to evolve and to incorporate elements from wherever and whatever its creators see fit.