One of the things about the Mizzou New Music Summer Festival that has absolutely captivated me this week is the personal role that one of the primary donors, Dr. Jeanne Sinquefield takes in the festival. I have never experienced this type of relationship before, and it has made me think a lot about the importance of patronage from private sources.

One of the things about the Mizzou New Music Summer Festival that has absolutely captivated me this week is the personal role that one of the primary donors, Dr. Jeanne Sinquefield, takes in the festival. I have never experienced this type of relationship before, and it has made me think a lot about the importance of patronage from private sources. I am familiar with funding that comes through various types of grants, either via non-profit organizations or local, state, and national arts councils, but I have never before been in a situation where a single private donor is so supportive, or is such an integral part of what she is funding. As a musician, I have often felt like the people who are in the best position to support the arts do not actually feel that art (especially the creation of new art) is an integral part of our culture or is worthy of support. However, here in Columbia, Missouri, the situation is unique—they have Jeanne Sinquefield.

Jeanne, who plays string bass in several local ensembles, first became interested in the idea of creating new music through one of her cousins, who was always writing music but could not actually notate or read the music that he was creating. Jeanne began to help her cousin out by writing some of his music down, and they would play the music together. From there, she became fascinated with how people create music and began to make plans to “grow composers.” Through a partnership with the University of Missouri School of Music, Jeanne started a three-tiered plan and often uses a baseball analogy to describe it. In the little league, K-12 students participate in the Creating Original Music Project, or COMP, which encourages students to compose music and culminates in a competition and performance of the winners’ music. The pony league allows high school students to further develop their skills as composers and ends in a competition and a summer camp. Jeanne considers the Mizzou New Music Summer Festival to be the major league. This festival brings eight emerging composers to Columbia where they receive a professional performance and recording of their piece by Alarm Will Sound.

I spoke with Jeanne during intermission of the concert Friday night entitled “Mizzou’s Right to Bear New Music.” Jeanne said that she could already see the results of her three-tiered plan—the number of students involved in the COMP project has already grown and many people in central Missouri have become involved in these programs and attend new music concerts. People in Columbia have also become more interested in and engaged with new music who would not have otherwise known about it except through these programs. This is the other side of the coin; Jeanne also sees the importance of bringing new audiences into the realm of contemporary music. From what I observed at the festival, it is working. All four concerts were well attended and the community members seemed curious and supportive, approaching performers and composers alike with questions and comments. The concert Friday night featured performances by members of the University of Missouri New Music Ensemble. I commented to Jeanne on how well the students were playing, and it turns out that Jeanne plays a big role in this as well. She supports five graduate assistantships for the new music ensemble.

From the very beginning of the festival, I was blown away by Jeanne’s generosity. In my first post, I mentioned that she invited us to her estate for dinner on the first night of the festival. She had also already been hosting Alarm Will Sound during the previous week, allowing them to use her lake house as a rehearsal space. In addition, Jeanne hosts artists for residencies and presents other concerts at her home. So, for me, it’s not just the fact that the Sinquefields donated the money to start the programs involved in the Mizzou New Music Initiative, it’s that she has such a personal relationship with the music-making she is supporting. Jeanne was at all of the concerts, and she is exuberant about her plans to transform Columbia into a “Mecca for new music.”

For more information about Jeanne Sinquefield and her involvement in the Mizzou New Music Initiative as well as her other philanthropic activities, visit the Sinquefield Charitable Foundation website. 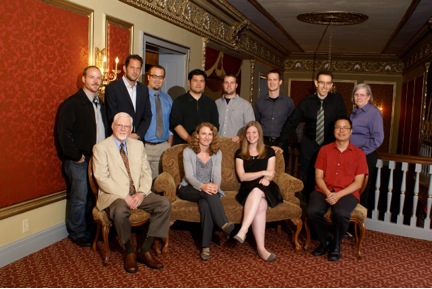