Here in Columbia, we have experienced much of the usual light-hearted camaraderie and goofing off that makes these types of festivals super fun, but we have also had an enormous amount of insightful discussion about our lives as composers and what we do (or think we are doing) when we compose. 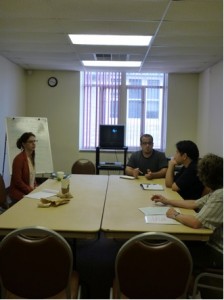 This week at the Mizzou New Music Summer Festival, various discussions and interactions between resident and guest composers have explored many issues related to being a composer. Here in Columbia, we have experienced much of the usual light-hearted camaraderie and goofing off that makes these types of festivals super fun, but we have also had an enormous amount of insightful discussion about our lives as composers and what we do (or think we are doing) when we compose. As I mentioned in my first post, on the first evening of the festival after our introductory dinner at the Sinquefield Reserve, Roger Reynolds and Anna Clyne summoned the resident composers into the sitting room for a special meeting and invited us to voice our “concerns” as composers. This immediately set the stage for a week of fascinating discussions about a number of compositional issues and helped us to be more vocal and candid as a group. Throughout this week, discussions have been both formal and informal, with Anna or Roger and without them, and aided or unaided by adult beverages.

Here is a sampling of some of the ideas that have been in the air this week:

Compositional Voice:
One of the initial themes that came up during resident composer presentations on Monday and Tuesday was the idea of having a unique compositional voice. Questions such as “What is voice?” and “How does one know if we are truly composing in our own voice?” were asked. The consensus seemed to be that your compositional voice is writing music in a way that is truly your own. Anna Clyne posed another interesting question: Can we compose with more than one voice?

Inspiration and Impetus:
Very early on during the resident composer presentations, we each discussed what inspires us as composers. Each resident composer is very different stylistically, and we also look to many different sources for inspiration. As a group, we have been directly inspired by sources ranging from popular music, folk songs, specific works of art, the music of previous classical composers, and nature, to random coincidences or ephemera. For example, resident composer Steven Snowden came across a set of hobo symbols on the Internet that inspired his A Man With a Gun Lives Here.

Closely related to the idea of inspiration, is the idea of compositional “impetus” as posited in lessons and discussions with Roger Reynolds. Reynolds thinks of the impetus as a sort of spark or seed that inspires a particular piece of music. Of central concern was how we take this compositional impetus and embody it in a piece of music. According to Reynolds, this involves looking at the impetus in many ways and trying to see all of the implications that it can have on the piece and eventually on the listener.

“We all feel that we are more understood than we are.”—Roger Reynolds

This last “issue” came up many times during the festival and centers around the ways that we communicate with other composers and inevitably, how we communicate (through our music) to the audience. The Mizzou New Music Summer Festival brought together eight very different resident composers and threw us in with two radically different guest composers. Throughout this week, we have made the best possible effort both to learn from each other and to explain our own compositional approaches to each other. Roger observed that many of us lack “clarity of intent” in our verbal explanations of how we approach composition and that many of us do not know how to adequately answer questions posed to us. Of course, language often seems woefully imprecise and different people will understand words and connections between words in different ways. However, Roger seemed to be pointing his finger at certain laziness in us all to take the easy way out with our explanations. Of course, this also extends to composition itself, and how a certain “clarity of intent” is necessary to truly communicate through our music. 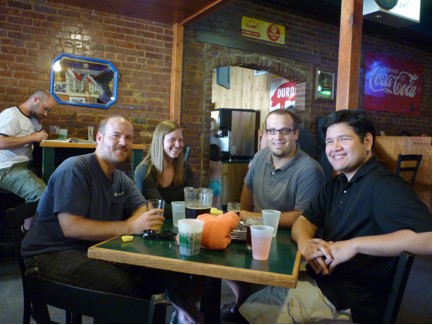