Ten x Ten: 2013 is a collaborative venture between ten Chicago visual artists and ten composers. Working in pairs, they crafted joint “statements of intent” and created pieces of music and art which speak to each other. Andrew Tham and Edie Fake speak here about their journey from collaborative “blind date” to finished piece.

This Saturday, three Chicago arts organizations will celebrate the release of Ten x Ten: 2013, a collaborative venture between ten Chicago visual artists and ten composers. These artists and composers, paired up by Access Contemporary Music (ACM), Homeroom Chicago, and Spudnik Press, worked together to craft joint “statements of intent” and create pieces of music and art which speak to each other. While the 2010 and 2012 editions of Ten x Ten paired visual artists with rock musicians and other recording artists, this year’s project is firmly in the realm of contemporary art music. The result is a ten-track vinyl LP, performed for the recording by ACM’s Palomar Ensemble, and a set of ten handmade screen prints.


The Ten x Ten project reflects the inclusive, community-building spirit that animates the operations of both Homeroom and Access Contemporary Music. Homeroom, whose mission is to “create an artistic dialogue with shared and far-reaching impact,” hosts songwriter nights, dance parties, and one-of-a-kind cultural events like “Barbie 101,” which critically engaged Barbie dolls through performance art, queer studies, poetry, and history. ACM’s contemporary music programs include a highly visible partnership with the Chicago Architecture Foundation, a wildly successful silent film festival, and an international commissioning program that brings music from around the world to Chicago. Thus, it’s no surprise that Ten x Ten has generated a set of fascinating works—and lots of interdisciplinary neuron-firing.


To learn more about the process of creating musical-visual dialogue, I talked to composer Andrew Tham and his collaborator Edie Fake about their journey from collaborative “blind date” to finished piece.


Ellen McSweeney: Andrew, did you and Edie get to know each other’s work before crafting a statement of intent and moving forward? What was that like?

Andrew Tham: Basically, the setup was that we met each other at the launch event that ACM and Homeroom set up for us. I didn’t know Edie’s work beforehand, so it was like a blind date of sorts. We sat down that same day and had an hour-long discussion. We talked about what both of us were working on in our own fields. He told me about the concepts that he’d been dealing with, up to that point. I told him about the concepts that I was thinking about in music. We asked, “How can we use this project as a way to combine our interests and further the conversation for both of us?”

EM: How did Edie’s visual language, which is so vivid, so full of humor and self-exposure, affect the way you approached the sounds in your piece? 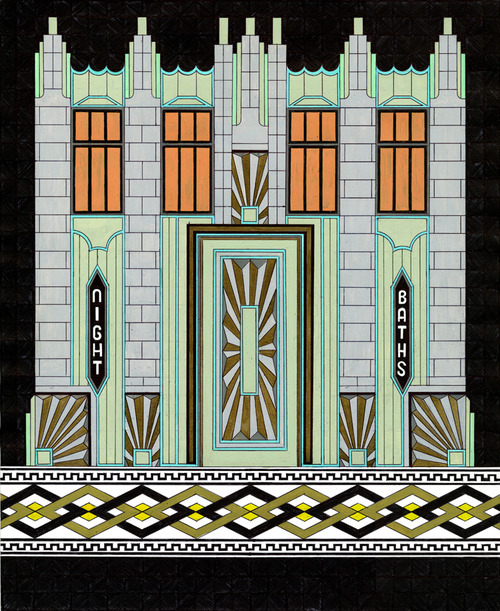 All artwork by Edie Fake

AT: I was really inspired by Memory Palaces, the most recent project that Edie had finished when we started talking. It’s all these reimaginings of spaces in Chicago—places like gay bars, gay clubs, spaces that have social potential and represent an ideal of social utopian space. And those are really architecturally dense—a lot of patterns, a lot of colors, really dazzling. He was trying to achieve an effect where you get this pattern going, and for the viewer, the more you look at it, the more it begins to throb or resonate. So this is the crux of our piece: we were both trying to achieve a changing temporal experience.

So my piece begins in a way that is very static. The idea is that I want it to be this flat, 2-D thing that over time stirs and becomes something more interactive, that engages the listener more and more as time progresses. And that was what Edie’s work was doing in these pieces. As you look at it for longer, you get more depth.


EM: Physical space also ended up being an important theme in your work together.

AT: Yes. As a way of beginning, I went out and found physical spaces that I wanted to translate into music, or capture an atmosphere. I made some musical sketches and field recordings and sent that to Edie—not telling Edie what it was from. He made sketches from that, and that influenced how I wrote the rest of the piece.

Edie Fake: I’ve been doing fantasy architecture drawings for a little while, usually exteriors. But when it came time to portray the space the music was making, it was obviously an interior space for me. At that time, I’d been reading a bit on how the structures of a house or building roughly psychologically align with our bodies and minds. I guess I’m still puzzling it out, but for me a sound almost automatically crafts an interior space in my mind, whereas an idea, thought or aspiration I usually visualize as an exterior, an edifice. 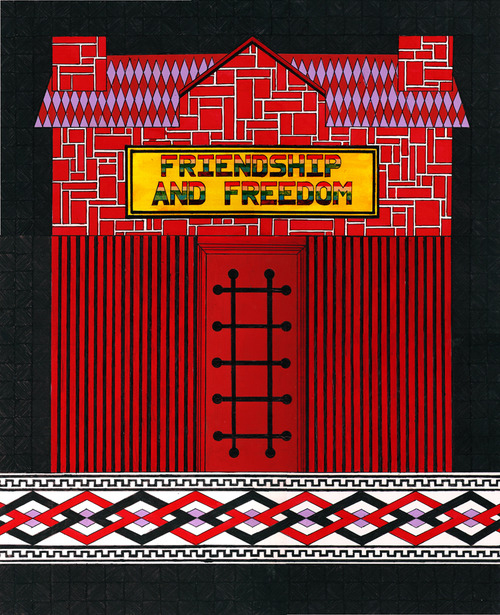 EM: What were some of the challenges of the project for you, Edie?

EF: Deciding on the colors for the final print was a big challenge. We were asked to play with the idea of synesthesia, and I needed to figure out what colors meant for the sound of the piece. I usually design with a ton of colors, but Andrew’s sounds had more restraint. It definitely took a while for me to realize I only wanted a couple of colors popping out from a dark space. 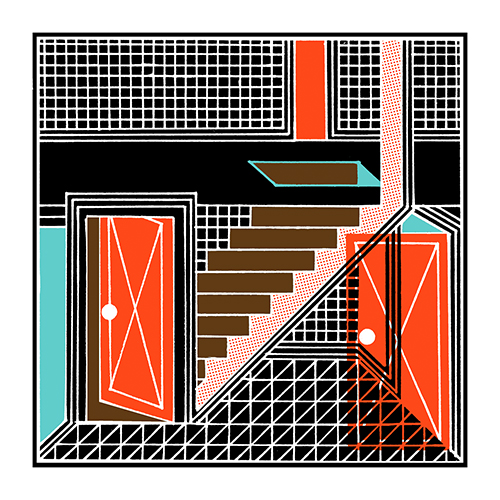 EM: As people who normally work alone, how did you adjust to the joint process of creating the work?

AT: We acknowledged off the bat that it wasn’t a long-term, completely integrated kind of collaboration, and that posed an interesting challenge for us. The whole project is about the synthesis of visual art and music. How can we contribute to that concept, even if we’re not collaborating on a super intimate level? So we set it up like a game of telephone.

EF: It was pretty great – by playing a game of telephone between sound and image, we were trying to mimic the spaces we were creating in our own media. I really like when an exchange has an element of play to it. This was a great warm up for what we were going for, using static media to talk about the importance of live space.

AT: We had the same concept in mind, and we were interested in how the game of telephone distorts the process. There’s influence, but it’s never quite the same each time. We tried to embrace that.

You can hear all the tracks from the Ten x Ten project, right here. The release party is this Saturday, November 16, at the Ukrainian Institute of Modern Art.