As a young and very green teacher of both classroom and private students, I have no illusions about making mistakes in my teaching. Teachers face challenges in managing many different personalities in a classroom, particularly in equating vocality with interest or aptitude.

This is the final post in a four-part series about the important role female mentors have played in developing my artistic and civic identity.

I mentioned in my previous article that advice at the right moment or the spontaneous outreach of compassion can turn anyone into a mentor. Of course, the opposite can happen. Tina Tallon recently shared a moving story—worth reading in full—about an all-too-familiar mentorship blunder:

The presenters asked if any of the students composed music, and only two people reacted…They were a seven-year-old girl in the front row, right in front of the presenters, and an older boy (probably 12 or 13) off to the side. The girl shyly raised her hand to about shoulder height, and the boy’s hand shot up in the air and he said “Oh, totally!” So the presenters of course turned and started up a conversation with him, asking him what instrument he played and whether he wrote music for himself or other people. He responded that he played violin, but that he wrote music for full orchestra. They noted how awesome that was and continued asking him questions and complimenting him, all while the girl looked more and more disappointed. By the end of the conversation, she was looking at the floor. The presenters then turned back to the center of the room and asked if there was anyone else, and this time, she didn’t raise her hand at all. She just kept looking at the floor.

Tallon came to the rescue by approaching the young girl after this exchange. She offered the enthusiasm and support the youngster had been denied in a public forum. Tallon also offers poignant cautionary advice to her readers: “It became very apparent that even the seemingly smallest of actions might have significant consequences… especially when working with the youngest members of our community, we need to be very clear about offering encouragement to everyone, not just the most gregarious (or whitest or male-est) students.”

This article is not about the countless studies that show men to be more talkative than women or more likely to interrupt their peers, garnering more attention than their female counterparts. Nor is it about the very real confidence gap that begins to distinguish genders at a very young age. But I can’t write about benefiting from strong female mentorship and reflect on my own teaching unless these cultural, historical, and sociological realities are recognized. 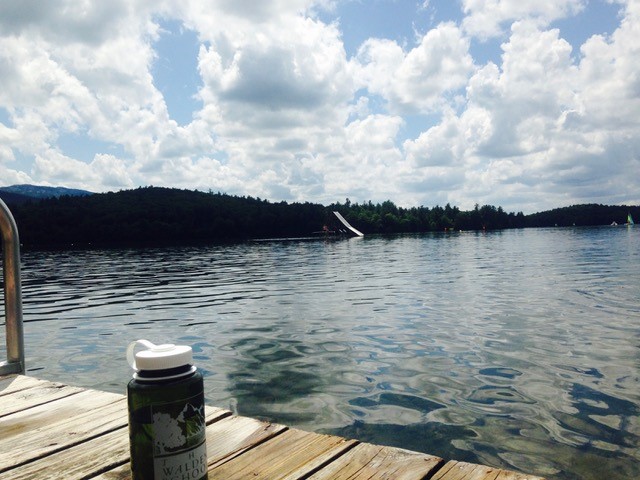 Dublin Lake, where I have often sat and thought about teaching when I’m at The Walden School.

I can’t write about benefiting from strong female mentorship and reflect on my own teaching unless cultural, historical, and sociological realities are recognized.

As a young and very green teacher of both classroom and private students, I have no illusions about making mistakes in my teaching. But Tallon’s story made me reflect on one teaching moment in particular.

At Bard Prep, where I teach music theory and composition, my most advanced music theory class this semester was comprised of four very loud, confident preteen boys and a shy, subdued, slightly younger girl—I’ll call her Alice. The boys had a common interest in composition, and they would often leave the classroom talking excitedly at each other about their projects.

Alice was an engaged but quiet participant, clearly listening but only contributing if explicitly called upon. While I was definitely sensitive to Alice’s timidity in the midst of this garrulous boy-dominated classroom environment, I didn’t want to make her feel self-conscious by singling her out, nor did I want to disrupt what I thought was relatively productive management of a high-energy class.

After the last class of the semester, Alice stayed behind and asked if she could show me a piece she’d written. Of course, I was elated! One of her classmates, I’ll call him Pat, overheard this exchange and asked if he could stay and listen to Alice’s composition, because “he too was a composer and very interested to hear what she’d come up with.” At first, I hesitated, thinking that perhaps Alice would retreat into shyness if she felt judged by a peer. But Alice consented and proceeded to play a gorgeous blues-y piano piece. Pat, in his sincere excitement, began explaining what he heard and appreciated, which quickly digressed into a monologue about what he likes to compose. When I tried to shift attention back to Alice by suggesting that she and I do a blues improvisation together, Pat automatically inserted himself into the activity.

I felt totally stuck as a teacher in this moment. On the one hand, I was petrified that Pat’s overbearing presence would make Alice feel insignificant in a moment of vulnerability. On the other hand, I didn’t want to exclude or shun Pat, who didn’t understand why his behavior might have been inconsiderate. Moreover, I also did not feel that this was the moment to address issues of peer listening with Pat, as this would further shift the interaction away from Alice’s music and towards Pat’s behavior. Add to that the fear of inappropriately projecting these anxieties onto what should be a positive musical experience, encouraging Alice to share her talents again (and again and again). Might my poor management of this situation create detrimental consequences for the impressionable Alice’s psyche? Gah!!

In the end, I was able to strongly connect with Alice and saw in her a newfound confidence and joy in music making.

This scenario contained several valuable lessons. First, I am ashamed to confess that if Alice had not approached me on that last day of class, I would not have known about her compositional interests because I did not ask. This reveals common challenges that teachers face in managing many different personalities in a classroom, particularly in equating vocality with interest or aptitude. I’m sad that I wasn’t able to identify and then overcome this challenge. I’m also glad to have gotten a chance to discover and try to remedy the situation.

Teachers face challenges in managing many different personalities in a classroom, particularly in equating vocality with interest or aptitude.

Second, just because I can’t ignore or brush aside the implications of this moment’s gender dynamics and their potential consequences doesn’t mean Alice is not enjoying herself. She was having a blast sharing music—she was not burdened by my baggage, sensitivity, awareness, etc., of the scenario at play. I have to be careful about imposing my anxieties onto her and Pat, making more out of a situation than is perhaps warranted. But maybe I am making the right amount of fuss about it. I just don’t know, and not knowing is why mentoring is so hard.

In what ways should we be vigilant as mentors, and how extreme should our vigilance make us? How do we best nurture a creative person’s individuality? What is our part in shaping that individual into a confident, compassionate community member? I think these are some of the questions that the mentors I’ve written about have considered with great care. As they were mentoring me, they were undoubtedly observing situations like these and making decisions about vigilance. For this I am grateful.

My classroom white board the last day of class. The students would keep track of what they called “Katie’s quotable quotes” and when ever I said something silly or dumb or amusing they’d write it down.