Loudness Isn’t What It Used to Be: Southland Ensemble and Robert Ashley

The ensemble chose to perform their selection of Ashley’s works continuously without a break, sometimes even simultaneously. Boundaries were blurred—not just between the pieces themselves, but also between music and theater, between audience and performer, between performance and life.


One of the most memorable events I’ve been to this summer was Southland Ensemble’s June 8 concert featuring the music of Robert Ashley, presented by Dog Star Orchestra as part of their annual new music festival in Los Angeles. The event was hosted by Automata, a small gallery nestled in Chinatown’s Chung King Plaza, and the space was packed to capacity. There was a palpable sense of energy in the room, which felt transformed into another world for the duration of the smartly staged, almost ceremonial performance. The ensemble chose to perform their selection of Ashley’s works continuously without a break, sometimes even simultaneously. Boundaries were blurred—not just between the pieces themselves, but also between music and theater, between audience and performer, between performance and life. This confusion could have been alienating, but in the hands of these committed players, it was instead bewitchingly mysterious. It made me deeply curious about the origins of the concert and the process that led to their programming decisions, so a few days after the performance I posed a few questions to ensemble members Christine Tavolacci, Eric KM Clark, Matt Barbier, and James Klopfleisch.

The concert was bookended by Klopfleisch performing The Entrance, which calls for pennies to be carefully stacked on the keys of an organ, generating long held drones (though whether the sound is the point of the process or a byproduct is ambiguous). The piece appealed to Klopfleisch’s masochistic side—“it requires tremendous focus and is very physically taxing”—but it also had an exceedingly long possible duration, far longer than they expected the concert to last. Having the piece run continuously during the show allowed them to conceive of it as a throughline that bound the concert together. It also recontextualized the space between pieces, as Clark noticed: “I personally love replacements of silence and changes in perception. During The Wolfman, I was standing right beside the organ yet couldn’t hear it at all. As soon as The Wolfman ended, the organ came back into prominence for me. I loved that sensation.” (To me it also suggested an infinity of sound, implying tones both before and after the performance.)

In a sense, this made She Was A Visitor the true beginning of the performance. One of Ashley’s best-known works, this version featured Christine Tavolacci repeatedly intoning the titular phrase with impressive precision and consistency, while the other performers led the audience in mimicking selected sounds and phonemes from the phrase. Tavolacci found this work to be unexpectedly demanding. “In order to successfully and consistently perform the speaking part for a long period of time, I had to exclusively regard the text as a combination of musical sounds,” she explained. “It is one thing to understand a concept, and another to successfully perform it. The moment that you think that you are reciting the words is the moment that the ostinato could potentially fall apart.” 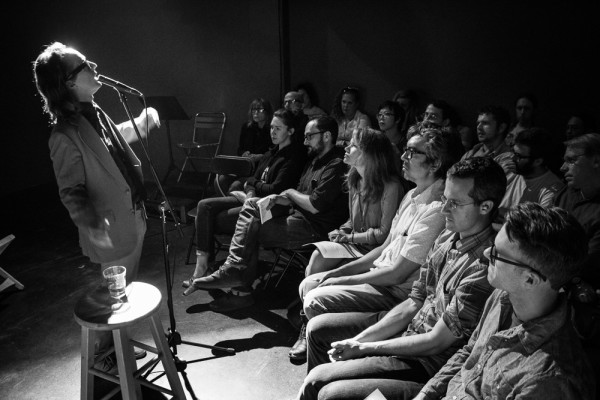 If She Was A Visitor is one of Ashley’s most inviting pieces, The Wolfman is perhaps one of his most forbidding, at least by reputation. The score calls for a vocalist, in the persona of a “sinister nightclub singer,” to be amplified with feedback tuned to the size of the room, creating piercing high-pitched squeals in all but the largest spaces. Here Klopfleisch played the vocalist with appropriate levels of sleaze, while Casey Anderson ran electronics with a unique interpretation of the score. Klopfleisch said that “Casey had the most interesting take on The Wolfman—that even though it is presented as being obscenely loud, loudness is now more relative than it used to be, or rather the technological limitations of the time required the piece to be incredibly loud.” By using software to create digital feedback, Anderson was able to ameliorate the harshest sounds without diluting their power. The result was almost overwhelmingly intense but never painful, and I appreciated being able to hear an incredible amount of detail in the cascading, ever-changing waves of noise. 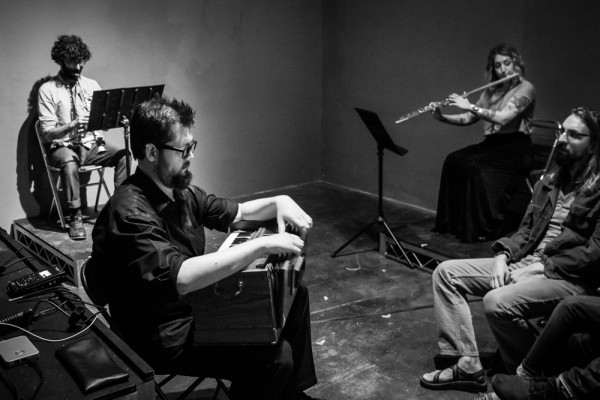 in memoriam… ESTEBAN GOMEZ and Trios (White on White) rounded out the program. Drones were a prominent feature of both, blending effortlessly with the ongoing organ tones from The Entrance. The first Trio, with Tavolacci on flute, Anderson on alto saxophone, and Matt Barbier on trombone, was especially bracing. Barbier was particularly drawn in by this piece. “Our parts are all to be played as loud as possible, so it was challenging to find ways to do that while also making a combination of alto flute, sax, and trombone sound so all three are audible,” he admitted. “It’s a fascinating aspect of Ashley’s music—the small details don’t always seem to mesh with larger ideas at first glance, and part of the process is to find a solution in the details.” 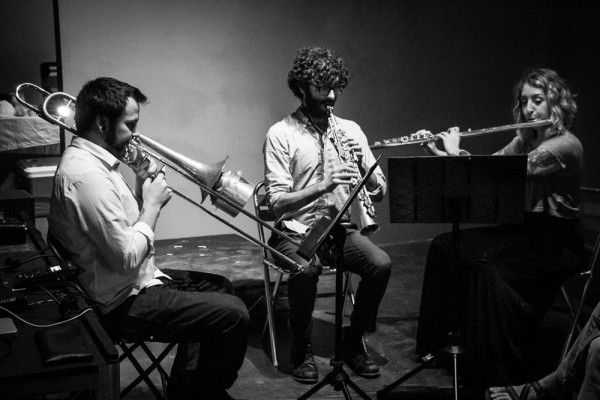 In the second Trio, the overlapping long tones played by Orin Hildestad (violin) and Jonathan Stehney (recorder) were intermittently interrupted with resonant junk percussion played by Klopfleisch. After all this nearly static slow burn, the third Trio was an enjoyably absurdist surprise, with Barbier giving a mini-lecture on the history of his instrument and demonstrating with musical examples. Partway through, a violinist (Eric KM Clark) and violist (Cassia Streb) emerged wearing black tie formal wear and masks to provide off-kilter musical accompaniment. Theatrically, the costuming and staging was inspired, and emblematic of the ensemble’s approach. Throughout the concert, they managed to make creative and enriching additions to Ashley’s ideas, all the while staying true to the spirit of his scores. 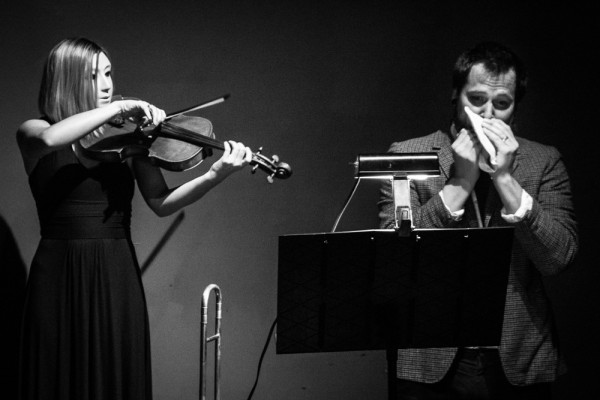 All of the performed works were from Ashley’s early period in the 1960s. Tavolacci observes that while these works remain “highly influential and pivotal pieces in the canon of American experimental music,” they are rarely performed, perhaps because of their reputation for being more conceptual than musical. Southland Ensemble proved that this is anything but the case, that this is vital music that leaps off the page and takes up residence in our imaginations. Something tells me that I will be living with this music for a long time. 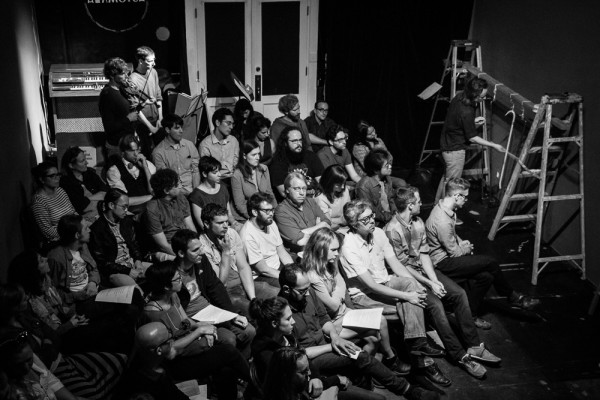