Let Them Eat Non-Perishables: How ALIAS thrives by giving all its proceeds away

Can an ensemble thrive by giving away everything it earns? For more than a decade, Nashville’s ALIAS ensemble has, earning community capital and Grammy nominations along the way.

It is not at all uncommon for musicians to donate their services to perform a concert to benefit a charity. Food banks, medical aid groups, homeless support, animal shelters–the list of worthy recipients is endless. These are usually one-off events organized by individual musicians in the community.

But: who has ever heard of an arts organization giving away 100% of its event ticket proceeds, year-round? The answer: Anyone who has been in Nashville, Tennessee, for the last decade, where the Grammy-nominated ALIAS Chamber Ensemble has been doing just that since its inception in 2002. 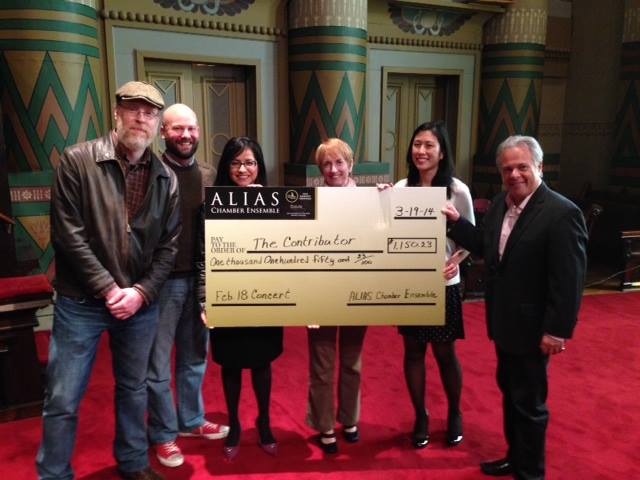 ALIAS board members present a check to a community partner.

I am a cellist, a composer, and one of the founding members of the organization. In the lifetime of the ensemble, ALIAS has commissioned over twenty works from composers including Gabriela Lena Frank, Kenji Bunch, and Paul Moravec. The ensemble has also recorded three CDs, the first of which garnered a 2012 Grammy nomination for Best Small Ensemble Performance. I wanted to share ALIAS’s story to show the value of a very different operational model for a performing classical ensemble. It may seem counterintuitive for an ensemble to give away all of its ticket sales for every one of its concerts. Nevertheless, ALIAS has pioneered this model, and over the course of more than a decade has revealed that the benefits of doing so are surprisingly many.

The members of ALIAS have the luxury (if that is not too grand a word) of having stable careers as performers and teachers in Nashville: They are all professional orchestra musicians, recording session regulars, and college music professors who donate their time for exhaustive and thorough preparation of challenging repertoire. The performances are billed as benefit concerts, each one partnering with a different local nonprofit service organization. The charity partner provides volunteer support before and during the events, helping with publicity, lobby set-up, ticket sales, program distribution, and so on. But the key collaboration comes during the concert itself when, between two pieces, a representative from the charity has the opportunity to speak briefly to the audience about their mission. After the concert, the ticket sales are tallied, and ALIAS writes a check for the entirety. Some of the many organizations that ALIAS has benefitted over the years are: Open Table Nashville, Park Center, Nashville Adult Literacy Council, Elephant Sanctuary, and Big Brothers Big Sisters of Middle TN. ALIAS’s board of directors selects these charities to represent and support a broad swath of the city’s nonprofit service organizations, to reach the widest range of audiences. 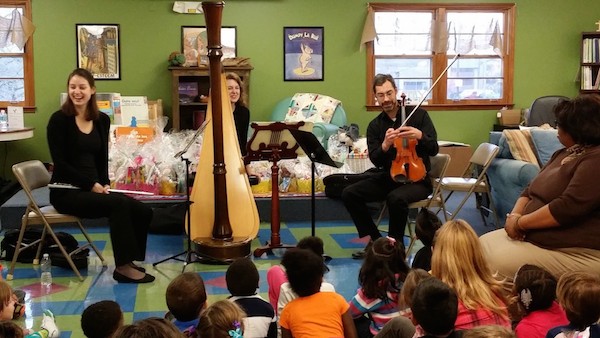 This model sprang out of a simple desire on the part of the members of the ensemble–a desire to do something positive for their community. The schedules of working musicians are sporadic, unpredictable, and crowded. Volunteering for a cause on a regular basis can be challenging, especially in a town where the phone might ring at any moment with a recording session or a wedding gig on offer.

Playing these concerts–chamber music polished to a very high level–for the benefit of different charities became a way for ALIAS musicians to feel that they were doing something they enjoyed, for a good cause. Moreover, the opportunity to play new and unusual music with colleagues of their choice, on their own terms, is so attractive that the musicians are glad to donate their time to prepare and perform these concerts. No one in the ensemble–neither the musicians nor the board members who were eventually attracted to the organization’s unusual mission–predicted how positive, how beneficial, this model would prove to be. 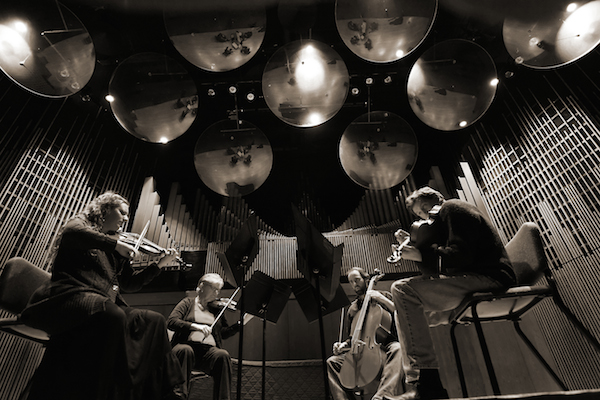 The ensemble rehearses at the Blair School of Music’s Turner Recital Hall.

Show Us the Money

By shining a spotlight not just on great art but on the problems that any community faces–and more importantly, on local service organizations that offer solutions to those problems–the ensemble quickly developed a stellar reputation city-wide, not just for its artistry, but for its citizenship. Local governmental agencies took note, as did individuals and private enterprises that recognized the value of good music in their community.

The community-giving aspect of the group’s mission made for an easier “sell” when it came to soliciting financial support. A healthy funding of the arts is demonstrably positive for any city, but adding in the charitable aspect created a more attractive and compelling story for donors to get behind. The resulting increase in fundraising power far exceeded the monetary value of the ticket sales, enabling the organization to more easily raise funds for its operating expenses and for its Education Community Programs, a series of outreach events for which the musicians do in fact receive an honorarium.

A Rising Tide Lifts All Ships

The rewards of this model aren’t limited to financial ones by any means. Both the ensemble and the charity partners reap the benefits in a variety of ways:

– Each new partnership with a nonprofit organization increases ticket sales and attracts new audience members to the ensemble. Likewise, the charity partner benefits from exposing itself to new audiences.

– Both groups increase their pool of volunteers, which is vital to any nonprofit organization.

– These partnerships foster a positive networking relationship between nonprofits in different areas of service. Rather than each group fighting for the same set of donor dollars, the organizations can often work together to support each other. It’s an illustration of the “rising tide lifts all ships” philosophy.

Another positive outcome as a result of this operational model is the general attitudes of the musicians of the ensemble. After decades of training and practice, and weeks or months of preparation, followed by a high-stress concert performance environment, musicians can sometimes become focused on minute details of their art. In fact, it is that kind of attention to detail, that lofty expectation, that makes it “art” in the first place.

When collaborating with local service organizations whose mission is to serve the disabled, the abused, the disenfranchised, the most at-risk populations among us, musicians are reminded that performing music is that much more rewarding if it is presented in a way that serves some greater purpose. At the concerts, we meet volunteers from the partner organization or we meet some of the charity’s constituents themselves–many of whom have never been to a classical music event. These new audiences expect tuxedos and chandeliers, or maybe berets and turtlenecks; in other words, a stuffy, high-dollar affair. Instead they see dedicated but casual musicians who are happy to engage with the audience from the stage, shedding light on the music, talking with the composer, or explaining the specifics of their instruments, thus making the performance more meaningful to the listeners. 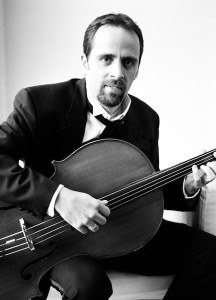 Matt Walker is a cellist and composer in Nashville’s ALIAS Chamber Ensemble. Aside from having written a great deal of music for a variety of ensembles and artists, including Yo-Yo Ma, Matt is also the co-author (along with his wife and ALIAS Artistic Director Zeneba Bowers) of “Six Tourist-Free Itineraries for the Foodie Traveler in Tuscany” and a travel blog, LittleRoadsEurope.com.